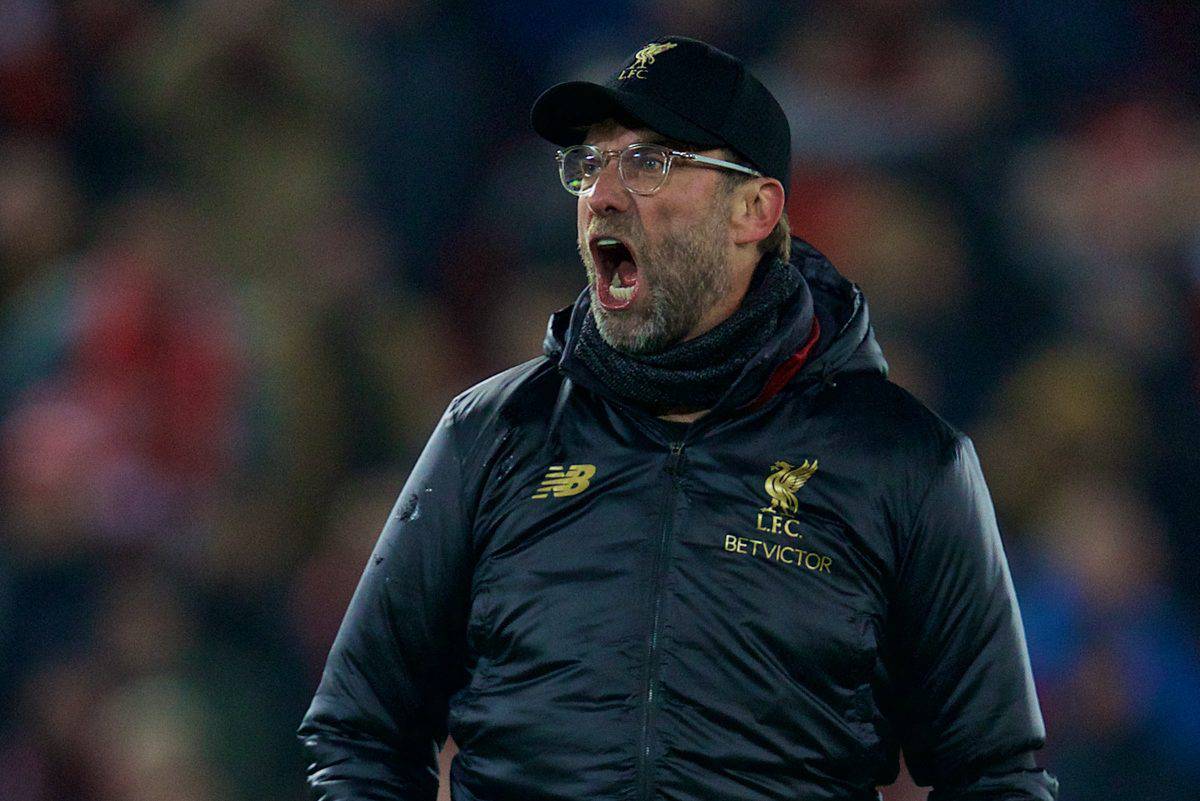 Jurgen Klopp‘s time at Liverpool has typically seen a dip in form throughout January and February, and overcoming this could ensure title success.

The Reds are in the midst of their most convincing title challenge in history, and provided they maintain their high standards will end the campaign as Premier League champions.

It would be their first title since 1990 and mark an incredible upturn in fortunes since Klopp’s appointment as manager in 2015.

Expectations surrounding Klopp’s arrival that October have been surpassed, and a new five-year contract signed last month—ensuring, all being well, his longest stay at any club—signifies Liverpool’s upward trajectory.

Key to the improvement in the four-and-a-quarter years since the German joined has been the ability to adapt to issues such as the lack of a winter break and a fourth competition in the League Cup.

The biggest issue so far, however, could be seen as the new-year slump, with Liverpool’s win rate over the final two months of one year and the first two months of the next dropping significantly: 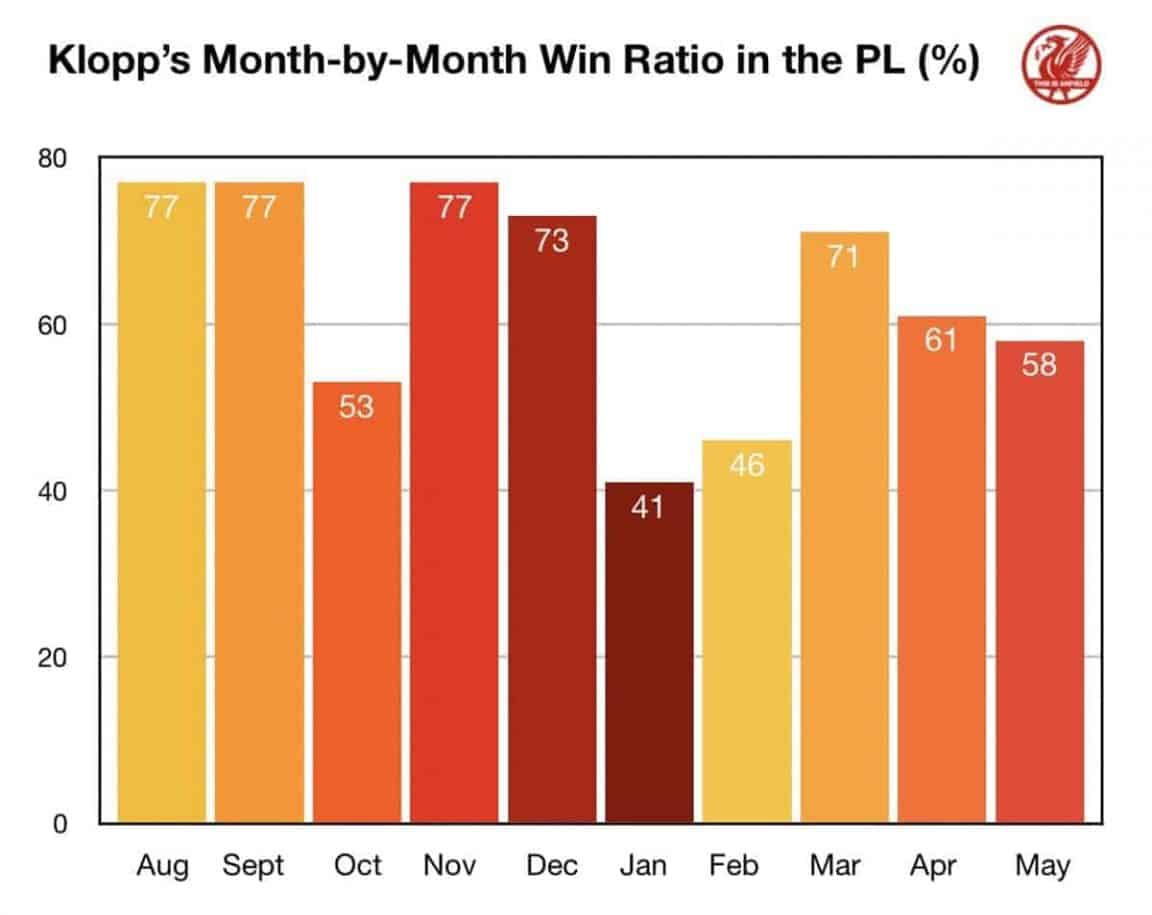 In his time as Liverpool manager so far, Klopp has overseen victory in 74.5 percent of games in November and December, while in January and February this falls to 43.3 percent.

At 41 percent, January is statistically the worst-performing month of his reign on Merseyside, and is the only month in which the Reds have tallied a goal difference of below +10—scoring 32 and conceding 28 for a difference of +4.

January and February have heralded more losses (eight) than August, September, October, November and December combined (seven), and the same as in March, April and May (eight).

There are clear factors behind this, with the increased workload over the festive period leading to injuries and fatigue setting in for the new year.

By way of example, the 2-0 victory over Sheffield United to kick off 2020—one of just seven wins in January so far–saw Joel Matip, Dejan Lovren, Fabinho, Xherdan Shaqiri, Alex Oxlade-Chamberlain and Naby Keita all miss out.

However, that win at Anfield hopefully highlights a increasingly positive record for the Reds in the first two months of the year: 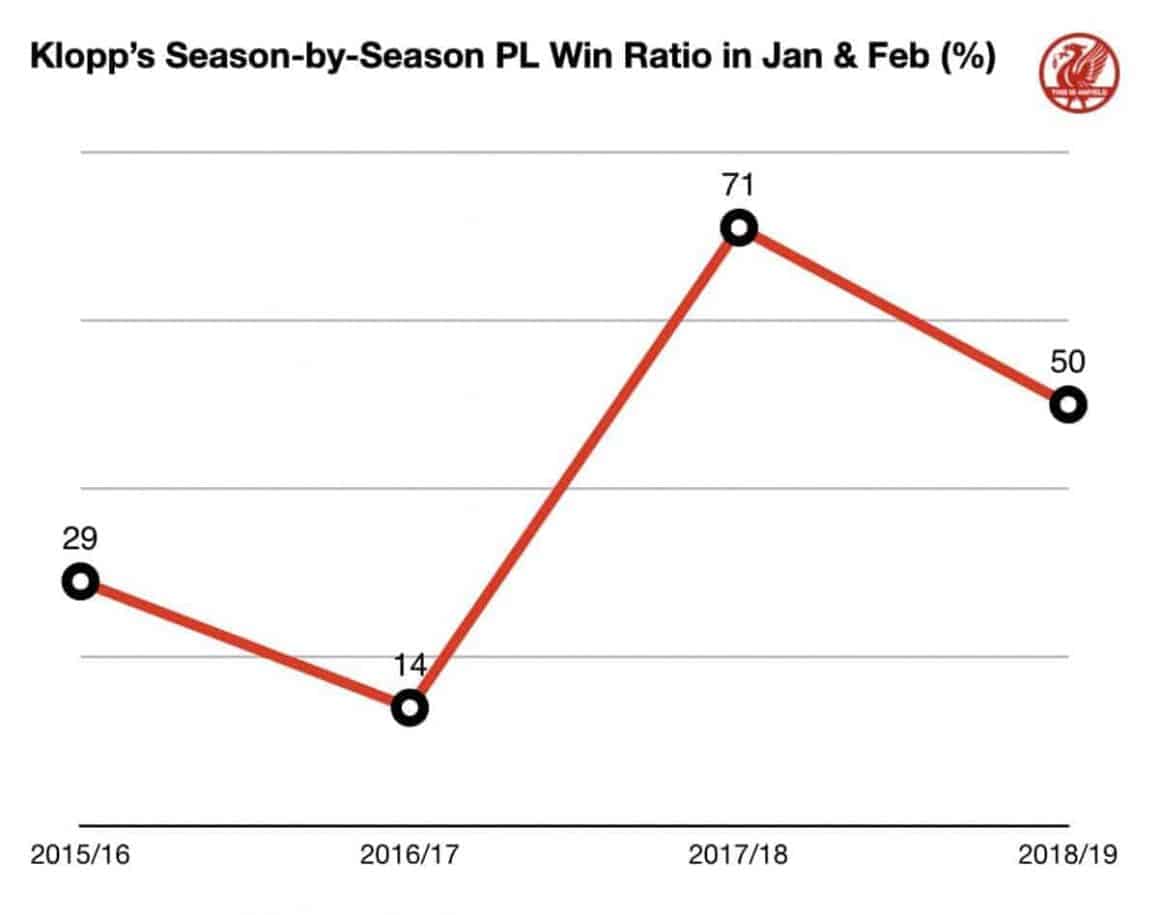 In his first two seasons with the club, Klopp enjoyed just three wins from 14 games across January and February, but this improved dramatically in 2017/18, with five wins in seven.

While this dropped to four victories in eight last term, in each of the past two seasons Liverpool have only lost once over January and February.

Jordan Henderson, in an interview with The Athletic last month, gave an indication of how Klopp’s approach has changed for the better in winter.

“I think the manager has changed a little bit in dealing with this time of year, in terms of recovery days and when to give people a rest,” he explained.

“Bringing in doing treatment and recovery stuff at home during a really intensive period has worked really well.”

The captain argued that it “helps the freshness of the players,” and also alluded to the positive benefits of more time at home with their families, which no doubt provides an intangible boost.

Oxlade-Chamberlain, Matip and Shaqiri have already returned to the fold ahead of the trip to Tottenham on Saturday evening, with Fabinho and Lovren believed to be closing in on their comebacks too.

Their availability comes at a vital time, as though Liverpool have exceeded their previous output in every month so far this season—and begun the year with a win—a successful January and February could be defining as they aim for a first-ever Premier League title.