Alisson has come in for praise of late after Liverpool began racking up the clean sheets – now Jurgen Klopp has highlighted what makes the goalkeeper so special.

An early-season injury for the Brazilian meant the new second-choice, Adrian, got a chance in the team unexpectedly, and he certainly played his part.

The Spanish veteran became something of a fan favourite and helped the Reds win the UEFA Super Cup, but there was no doubting the quality of our regular No. 1 and he was rightly back in the team once fit.

Even the strange aberration of Ali not keeping a clean sheet until 7 December could detract from his status as one of the world’s finest, but since then he has arguably gone up another level.

Put to Klopp in his pre-Wolves press conference that Alisson has been even more impressive this year than in his debut campaign, one journalist noted that since Wilf Zaha scored for Palace in November, Alisson has saved every shot on target he has faced in the Premier League: 18 in total, with zero conceded.

The boss says he’s not at all surprised by the technical brilliance of the Brazilian, but that it’s his personality which makes him even more vital to have around. 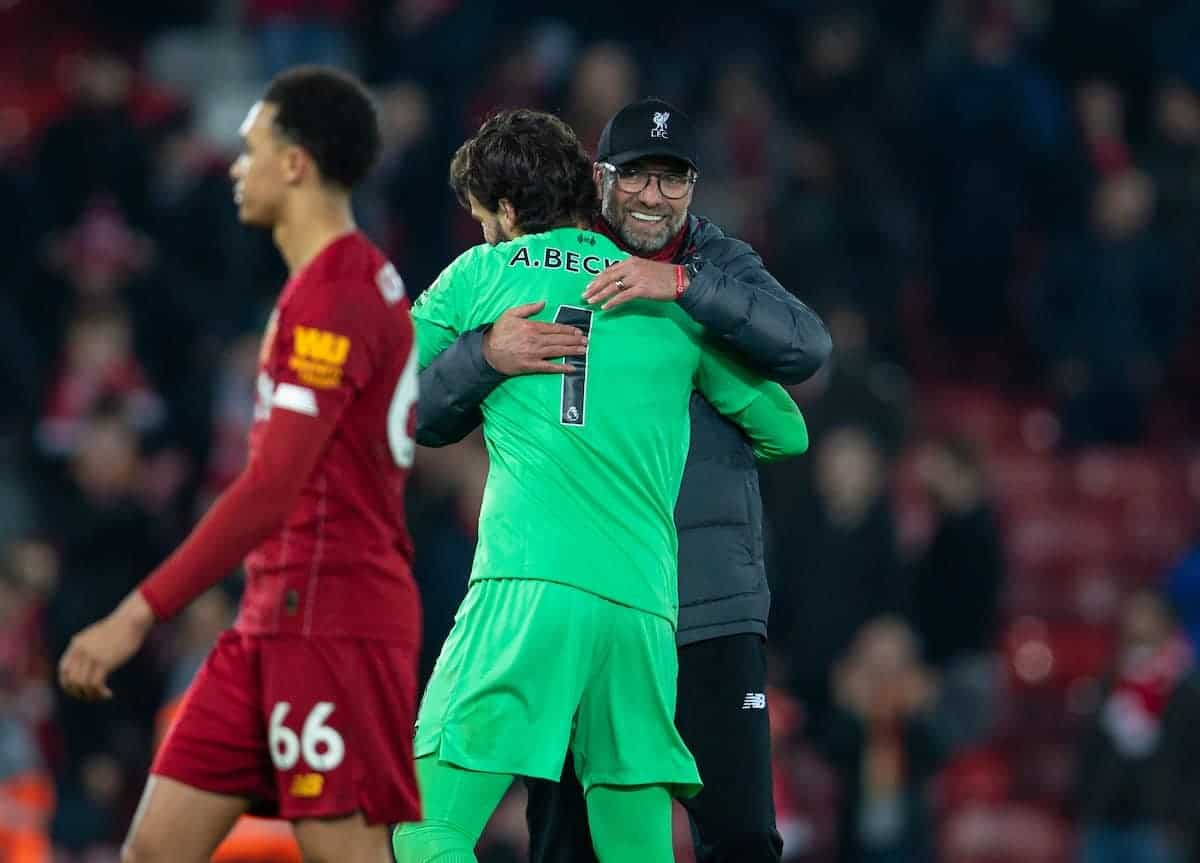 “As a goalkeeper we knew what we would get,” Klopp told the media. “He makes steps which is normal with the training he gets with [coaches] John [Achterberg] and Jack [Robinson].

“As a person, yes he has exceeded expectations because he’s an outstanding guy. You cannot imagine it. We have a lot of really good guys but he’s a very special person.

“We knew we would get a really good goalkeeper, his character and how calm he is helps us a lot, his goalkeeper techniques improve and improve, making the difficult things look easy.

“But you have to stay like this; as a goalkeeper, you make one little mistake and the ball is in the goal – that’s the life of the goalkeepers.

“I know Ali doesn’t take it for granted and I don’t. Fantastic boy, fantastic goalkeeper and good to have him here.”

With the Reds being so successful of late, in many matches Alisson is somewhat underemployed—but when he’s called upon, he comes up with a moment of brilliance, assuredness or reliability which ensures the team prevail. 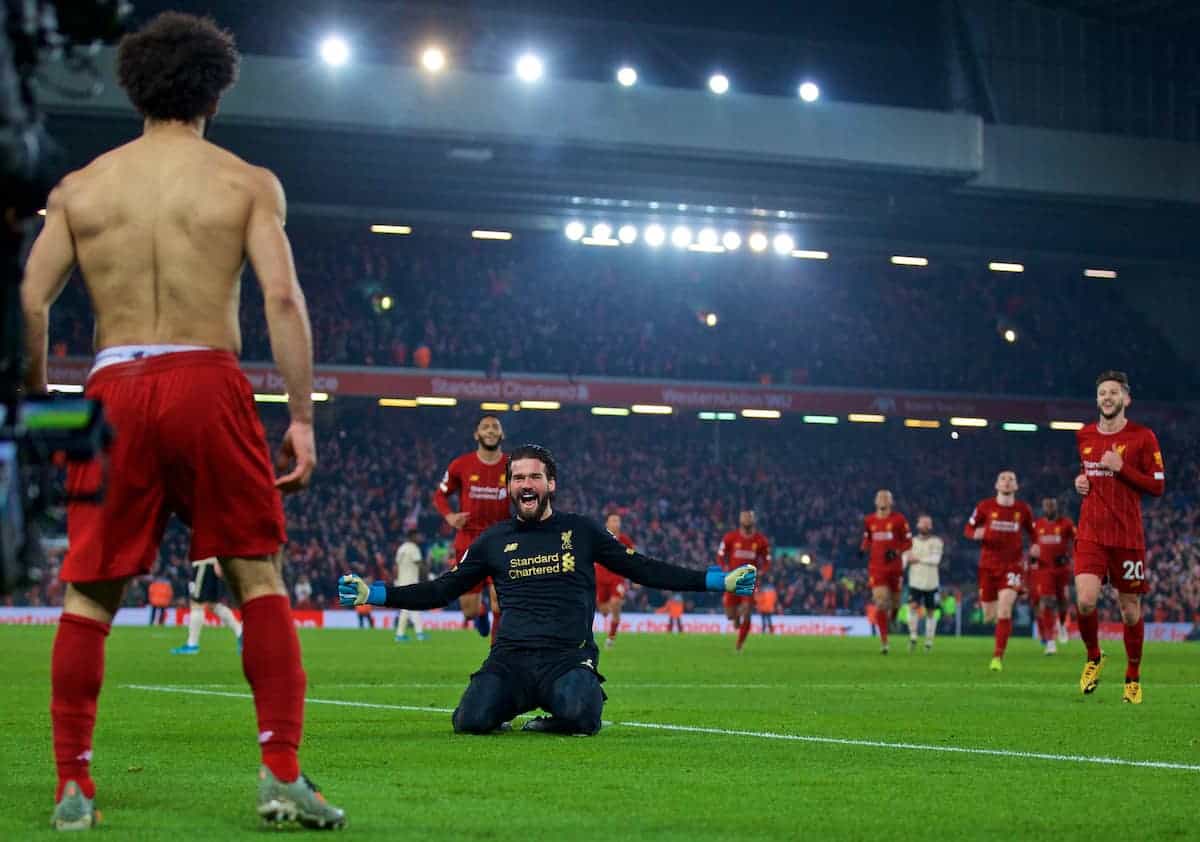 Ali’s calm demeanour is to thank for that, says Klopp, who put emphasis on Alisson‘s footwork as much as his handling ability.

Together with the strong mentality which is replicated through the squad, Alisson‘s approach to the game makes him the perfect goalkeeper for Liverpool’s needs.

“He knows the game, he had a different career to others – not 18 [years old] and No. 1 already, he had to work. His brother is a goalkeeper as well, I’m sure he helped him a lot. 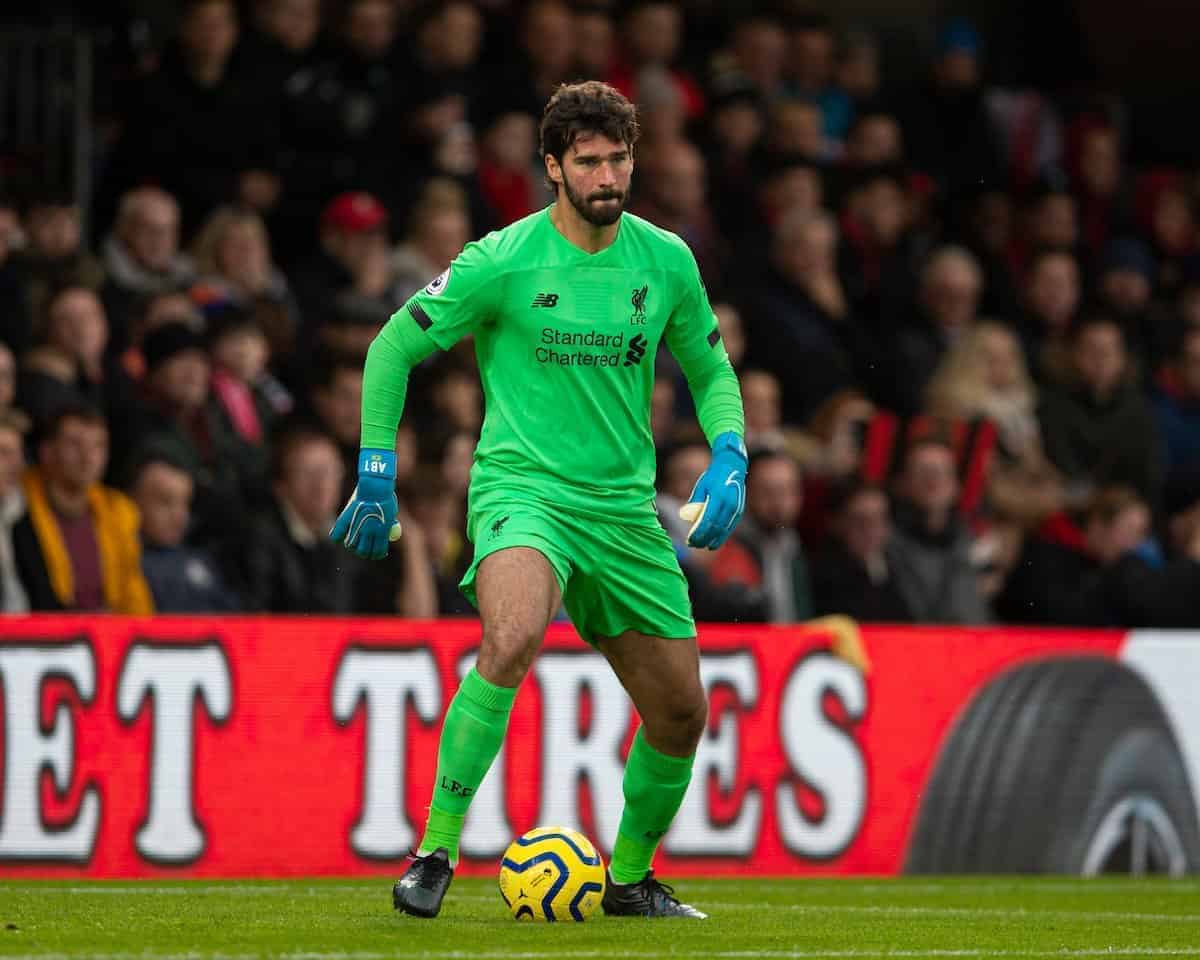 “You need a specific personality for that and thank god our boys have that.”

But there was an exception to Alisson‘s lack of excitability as he made a dashing run across the entire length of the field after suppling the assist for Mohamed Salah‘s goal late in the piece against United.

“It was great, best thing was he was the first there! That just shows how late it was in the game that the others thought ‘okay, it’s a bit tough to sprint there.’

“It was a nice situation. I didn’t see it in the game actually, I saw it later.”

Alisson is aiming to equal a club record on Thursday night, when the Reds face Wolves.

Another shut-out will mean eight in a row in the Premier League, something not achieved since the Rafa Benitez era and 2005, while the original club record of eight in a row was set in the 1920s.

One more Alisson clean sheet, then, would see him deservedly join an illustrious club—and would be one more notable milestone to look back on proudly once the main aim of the title is secured.