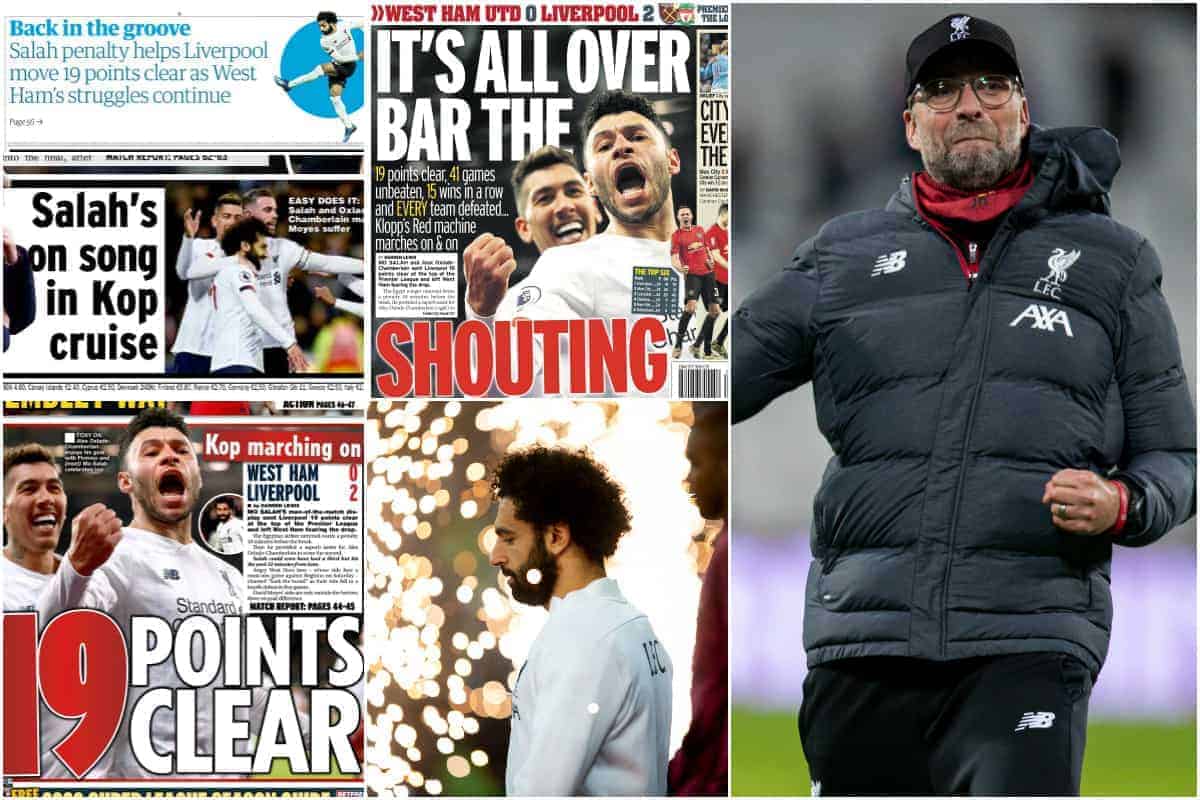 The media lauded Liverpool’s dominance in the 2-0 win at West Ham and singled out Mohamed Salah as the star performer on the night.

A dominant performance from start to finish earned the Reds victory to extend the lead atop the Premier League to a remarkable 19 points.

Salah’s first-half penalty put Liverpool ahead, before Alex Oxlade-Chamberlain’s clinical finish after the break sealed a routine win in the capital.

Just 24 points from a possible 42 are now required to end the 30-year wait, and here is all the key analysis from the media on the London Stadium triumph.

Writing for Goal.com, Neil Jones assessed it was one of the easiest wins of the season and wrote how Klopp’s side were still too good for West Ham despite only playing in “second gear”:

This was about as comfortable as it gets for Klopp’s side, who were in pipe and slippers mode for the most part.

Liverpool played in second gear, but they were still way too good for the Hammers, who are in the thick of a relegation battle under new boss David Moyes.

The BBC’s Steve Sutcliffe was almost shocked at the ease in which Liverpool won, and noted that it showed exactly why the Reds are certainties for the title:

But if you were, it would be the manner of this Liverpool victory that suggests they appear certainties to win the Premier League.
Like in recent victories against Tottenham, Manchester United and Wolves, Klopp’s side were far from their vintage best.

At times it appeared as though they were playing within themselves, until the moment arose for an incisive break forward, where their greater quality really showed.

Tony Evans, for the Independent, wrote how the effortlessness of the win with an “ordinary” display” by the Reds’ elite standards, should send a “wave of terror” through the division:

It should send a wave of terror throughout the Premier League that Liverpool were able to produce such an ordinary performance against West Ham United at the London Stadium and still win 2-0. 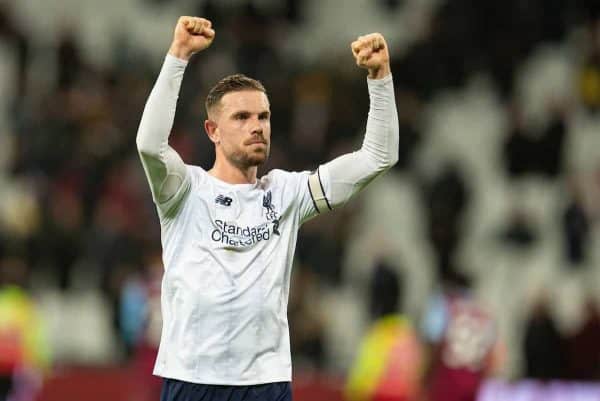 The Mail’s Riath Al-Samarrai wrote how Liverpool are currently redefining what ‘football dominance’ actually is:

What contrasting studies in momentum, this team that redefines what we thought we knew about domination and another which could soon be among less illustrious company.

The Mirror’s John Cross eulogised over how Liverpool continue to make everything look so easy, and stated that the Reds are so much better than everyone else it is “almost embarrassing”:

Liverpool make it look easy, the Premier League table suggests it has been as they are now a staggering 19 points ahead of the rest and, on nights like these, Jurgen Klopp’s men look so much better than everyone else that it is almost embarrassing.

Darren Wells, also for the Mirror, highlighted a couple of nice records that Liverpool accomplished with this victory:

The Reds have now beaten every team in the top flight this season – the first time the club have achieved the feat in their illustrious history.

And they racked up their fifth successive win in London for the first time since Kenny Dalglish‘s side of 1986. That Liverpool squad sealed the title on the last day of the 1985/86 season. It would be a shock if Jurgen Klopp‘s men take that long.

The Echo’s Ian Doyle provided another great stat, this time on Liverpool’s quite ridiculous run of form since the last meeting trip to West Ham almost a year ago:

Last season’s draw at West Ham was in retrospect seen as a hugely damaging result that perhaps cost the Reds their title chance.

In 37 league games since then, they have won 34 and drawn the other three.

That unique record of beating every team in the league this season shows this Klopp’s team is even more special that the great sides of yesteryear, in Jones’ view:

Not even the great sides of Bill Shankly, Bob Paisley or Kenny Dalglish managed that particular feat – that is how special this team are. 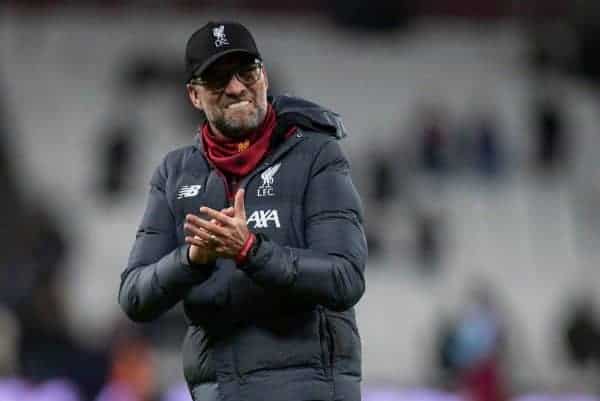 On this, ESPN’s Harry Kettle explained how the Reds’ simply overwhelmed West Ham through the ability to switch to quickly between domination and lethal counter-attacking:

There’s something so mesmerizing about the way Liverpool are able to control the ball in such an entertaining way, as they move it around so quickly and precisely that they don’t give their opponents time to breathe.

They were able to swarm West Ham and as the game went on, they transitioned into more of a counter-attacking stance that worked wonders.

The Telegraph’s Sam Wallace wrote how this adaptability is making it almost impossible for opposing managers to formulate a plan that can even hurt Klopp’s side, never mind actually beat the Reds:

There has to be a plan for any team with hopes of beating Liverpool and even with such a plan, the story of the last 12 months tells you that it will probably not be good enough anyway.

Wallace later explained how Liverpool have developed the skill of being able to win games by doing exactly what is required, which helps conserve energy and make it easier to maintain performance level:

Klopp’s players have the knack of tuning into what it will take to beat any given team on the day, whether that is the four goals required to stage an almighty upset against Barcelona, the two they needed last week at Wolverhampton Wanderers or the much less required for West Ham.

After all this, Jones dished out some incredible praise for the Reds, labelling Klopp’s crop “the most complete team” in Anfield history:

The truth of the matter is that this is the most finely-tuned, complete team this club has seen.

Kettle labelled Salah’s performance “one of his best showings of the season so far”:

In one of his best showings of the season so far, Salah smashed home from the penalty spot and put the ball on a plate with a killer through ball for the second from Ox.

Jones praised the Egyptian for stepping up again in the absence of Sadio Mane before providing a great stat which illustrated his individual brilliance and team contribution:

Salah, with 16 goals, is now Liverpool’s leading scorer in all competitions this season, the Egyptian taking advantage of Sadio Mane’s absence to re-establish himself as Klopp’s go-to man.

Salah’s other party piece is to score and assist in the same game. He has done that on 14 occasions in the last two-and-a-half years – no other Premier League player has managed more than nine.

Has taken his game to another level of late and was excellent once again tonight.

Snapped into tackles, moved the ball well, and showed his underrated vision with the pass that put Liverpool in position to create their second goal.

Wells thought Oxlade-Chamberlain’s goal-scoring display provided a timely boost to his chances of retaining his starting role as competition for places increases hots up again:

The 26-year-old stepped it up a notch against the Hammers though, and grabbed a well-taken goal for his efforts.

Oxlade-Chamberlain still hasn’t completed 90 minutes in the league this season, after being subbed off late on, but he has at least given his boss a timely reminder of what he can do.

And finally, Wallace thought Curtis Jones produced a nice cameo in providing the “extra energy” that Klopp wanted in seeing out the win:

There was a late cameo from the teenage Curtis Jones, a second half substitute for Oxlade-Chamberlain, and the natural eagerness to impress of the young Liverpudlian gave Klopp the extra energy he was looking for.