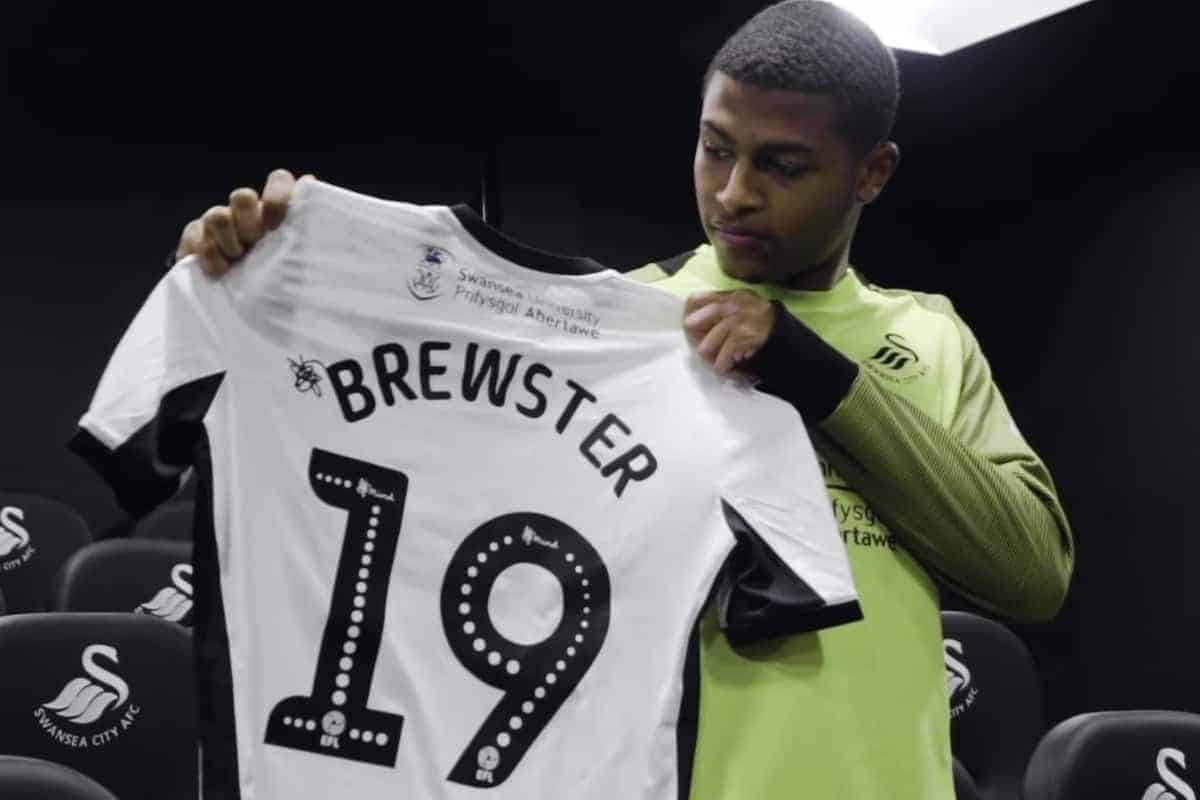 Rhian Brewster is set for a crucial experience with his first loan move to Swansea, and his time at the Liberty Stadium could benefit Liverpool hugely.

The 19-year-old has embarked on his maiden spell away from Merseyside, joining Steve Cooper’s Swans for the remainder of the campaign.

Having rejected advances from clubs in Germany to sign his first professional deal with the Reds in 2018, Brewster has been earmarked as a long-term fixture under Jurgen Klopp.

With the likes of Roberto Firmino, Takumi Minamino and Divock Origi blocking his pathway, however, playing regular first-team football elsewhere is vital.

Brewster thrived under Cooper as the England under-17s won the World Cup in 2017, scoring eight goals to win the Golden Boot, and the hope will be he can replicate this form in the Championship.

But what could Liverpool fans see of the striker at Swansea?

To get the lowdown on Brewster’s move to Swansea and expectations at the Liberty Stadium, This Is Anfield spoke to WalesOnline’s Ian Mitchelmore (@IanMitchelmore).

What are expectations of Brewster among Swansea fans?

Following the early departure of Sam Surridge, fans are expecting a lot from Brewster given that Borja Baston is the only other out-and-out striker Swansea currently have in their ranks.

Despite their indifferent form since August, Swansea are still somehow clinging on to a play-off place, and there’s a hope that Brewster can be the man to add some much-needed firepower in a bid to ensure Cooper’s men remain in the mix for a top-six spot further down the line.

He’s something of an unknown quantity due to his lack of senior action, but the fact he comes from a club of Liverpool’s stature has certainly helped to whet the appetite of the Jack Army.

Where does he fit in under Steve Cooper? Will he be first choice?

Cooper generally utilises a 4-2-3-1 system, with Andre Ayew tending to be deployed on the right which means the battle for the No. 9 spot now appears to be a straight shootout between Borja and Brewster.

Surridge had to be patient for starts after arriving on loan from Bournemouth in the summer, but he found himself getting more and more opportunities to impress as the campaign wore on as Borja struggled to find the form he showed in the opening month of the season where he netted five Championship goals.

It remains to be seen whether or not he’ll be first choice from the outset, but there’s no doubt that he’ll get a lot of game time.

Such is the relentless nature of the division, there will be spells that Brewster can expect a run of starts, and if he can hit the ground running early on he could quite easily make the striker role his own.

How do you predict the campaign to go for Rhian?

I expect him to be a real hit with fans given that he is someone with a strong work rate and a very positive mentality, as shown during his lengthy spell on the sidelines when injured at Liverpool.

His relationship with Cooper is a major plus, and the Swansea head coach believes Brewster’s character will ensure he fits in at the club.

I believe he’ll play a lot of football over the course of the remaining months of the season, and if he can deliver the goods his stock will be significantly greater when he heads back to Anfield.

And finally, Sunday is a huge game for Swansea at Cardiff – would you expect a first start?

It’s certainly a possibility given that Borja hasn’t scored since September, although Ayew could always lead the line as he did in the reverse fixture.

I’d be surprised if Brewster was thrown in at the deep end in what promises to be such a hostile fixture.

His pace would no doubt cause the likes of Sean Morrison, Sol Bamba or Aden Flint plenty of problems, although Cardiff’s physical nature would make life difficult for him.

He may be better suited to coming off the bench in the second half when the Bluebirds have started to tire.

* Many thanks to Ian Mitchelmore for his insight into Brewster’s loan move, follow him on Twitter @IanMitchelmore.