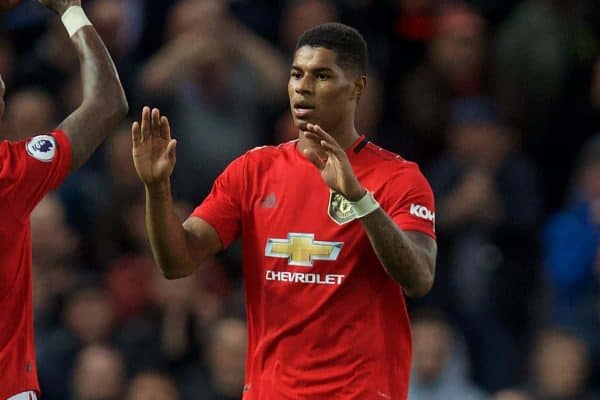 Ole Gunnar Solskjaer’s update on an injury to Marcus Rashford will seem familiar to Jurgen Klopp, after his attempt at mind games back in October.

Liverpool’s trip to Old Trafford earlier in the season saw Solskjaer cast doubt over the involvement of David de Gea due to an injury suffered on international duty.

The Man United manager claimed he didn’t “expect him play,” but as kickoff arrived in Manchester the Spaniard took his place between the sticks.

It was a move telegraphed by Klopp in his pre-match press conference, telling reporters that “that’s how all these games are played,” and they are “part of the preparation.”

Klopp is now faced with a similar situation as Solskjaer insisted on Friday that due to a back injury for Rashford he “would probably think that he wouldn’t be ready.”

“As I said with Harry [Maguire] a few weeks ago, of course we’re going to give him the absolute amount of time to find out,” he explained.

“We’re going to do some more checks and treatment with him today. Yesterday of course was just a recovery day anyway and some treatment for him.

“I haven’t seen him this morning, but I’m not going to hold my breath.

“I would probably think that he wouldn’t be ready, but let’s see. There’s still 48 hours, more than that, so let’s see.”

Solskjaer’s reference to Maguire is telling, after a report emerged in the Telegraph earlier this month that he faced a “sustained spell” out with a “torn hip muscle.”

Despite being funnelled through a journalist who writes almost exclusively on United it proved false, as Maguire was fit to play the next game, playing the full 90 minutes in the 4-0 win over Norwich.

It seemed a classic case of United using the media in attempt to dumbfound their rivals, which should not develop this time given Klopp is wary of “all these games.”

Liverpool should fully expect Rashford to start at Anfield—a stadium Solskjaer described as “intimidating”—which would of course provide United with a key threat as the 22-year-old is their top scorer this season, with 14 in the league and 19 in all competitions.

It is more likely United are without Paul Pogba, Marcos Rojo, Scott McTominay, Luke Shaw and Axel Tuanzebe, however, though Solskjaer has claimed Eric Bailly and Timothy Fosu-Mensah are “fit and available.”

Naturally, it should not be of a major concern to Liverpool which 11 United players take to the field on Sunday, as 27-point gap between the two sides should attest.