Liverpool’s 2-0 win away to West Ham was rarely in doubt, with Alisson and Mohamed Salah among the star performers for the Reds.

Jurgen Klopp‘s side made the trip to the London Stadium on Wednesday looking to go 19 points clear of Man City in the title ‘race’.

It took a while for Liverpool to get going, but they dominated possession and Salah fired his team in front from the penalty spot.

Alex Oxlade-Chamberlain doubled the lead after the interval, getting on the end of Salah’s inch-perfect pass and finishing with aplomb.

It means Liverpool have 70 points from a possible 72 this season, as this astonishing campaign continues.

Here we compare our player ratings with those from the Liverpool Echo, the Mirror, The Independent, FotMob and the TIA readers. 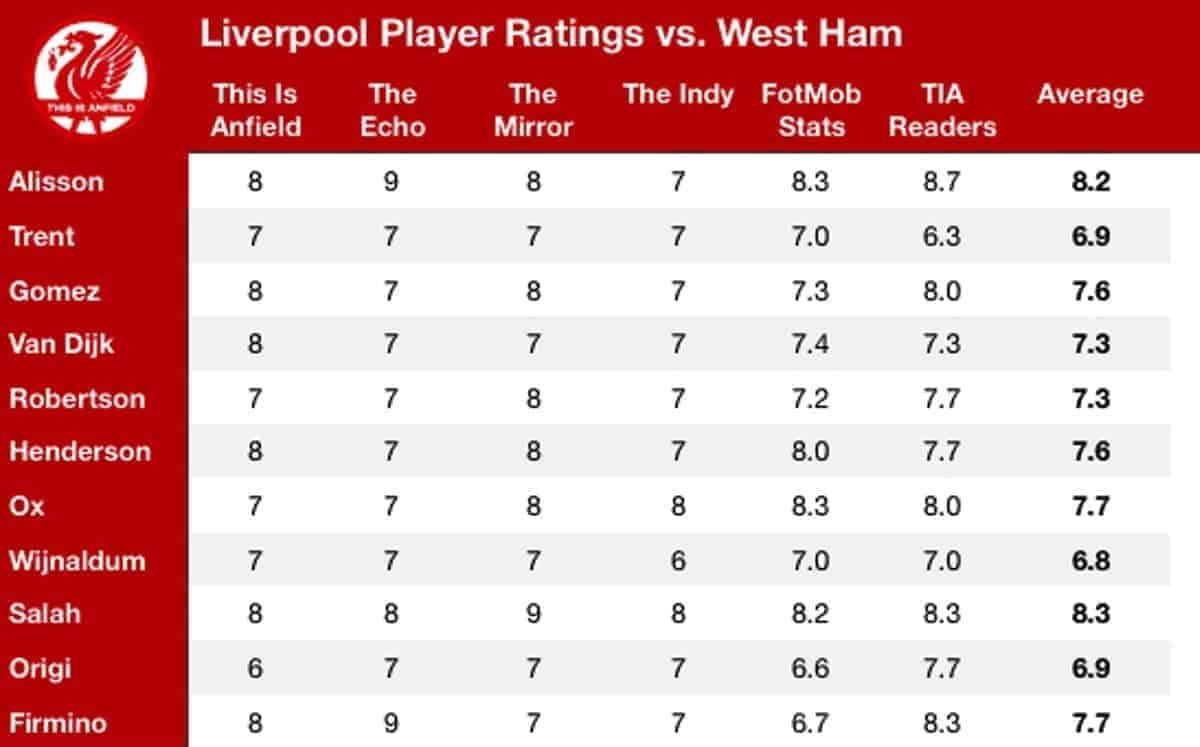 Salah (8.3) took the highest average on the night, following a much-improved performance that culminated in a goal and an assist.

With Sadio Mane absent through injury, Liverpool’s No. 11 stepped up hugely, putting in one of his most decisive displays of the season.

This Is Anfield’s Henry Jackson felt the 27-year-old was a “constant danger,” waxing lyrical about his “gorgeous outside-of-the-boot pass to tee up Oxlade-Chamberlain.”

Next up was Alisson (8.2), who once again showed why many consider him the world’s best goalkeeper.

Although untested in the first half, the Brazilian made several big saves after the break, earning yet another clean sheet in the process.

The Echo‘s Ian Doyle described Alisson as “very, very solid,” while Darren Lewis of the Mirror lauded a “fine second-half save” to deny Robert Snodgrass.

In joint-third place were Oxlade-Chamberlain (7.7) and Roberto Firmino (7.7), both of whom shone.

Lewis thought Oxlade-Chamberlain’s performance was a “fine answer to his critics” and FotMob highlighted that he won five of his seven duels, also making six ball recoveries.

Firmino, meanwhile, produced a “superb all-round display,” according to Jackson, and Doyle said he was “otherworldly at times.”

Trent Alexander-Arnold (6.9) and Divock Origi (6.9) shared the lowest average, but both were still a long way from poor.

Next up for Liverpool is Saturday’s visit of an in-form Southampton at Anfield.

A win would for the Reds would put them an incredible 22 points ahead of City, who face a trip to Tottenham on Sunday afternoon.