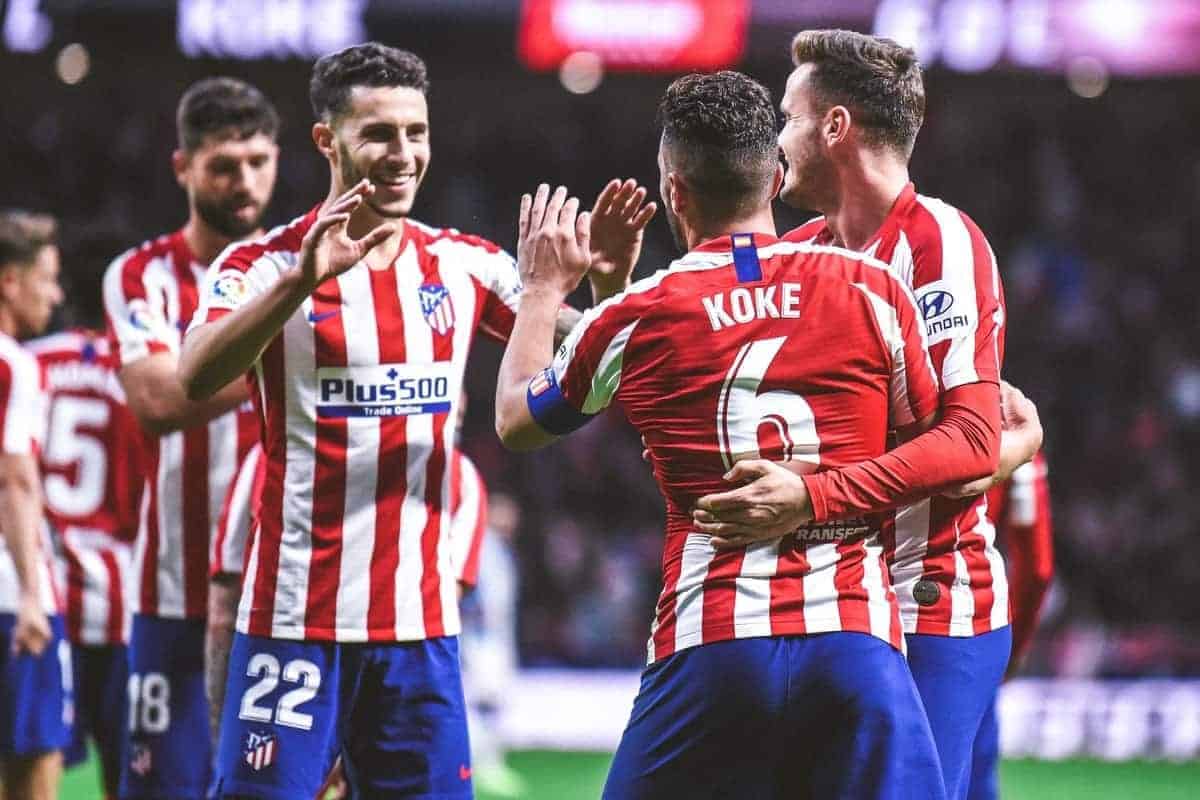 It’s been a busy start to the new year for the European champions, and Liverpool would be forgiven for not dwelling on their Champions League last-16 draw against Atletico Madrid. Thomas Bolton provides an in-depth guide to the Spaniards.

Now Jurgen Klopp’s men have a bit of breathing room they will be starting to cast their eye forward and considering what it’s going to take to defend their European crown.

Football has an odd habit of repeating itself and Liverpool’s upcoming assignment has proved no exception. The Reds’ trip to Atletico will ensure their growing connection with the city of Madrid will continue into 2020.

Bizarrely, four of Liverpool’s five forays into the Champions League this decade had seen them playing either in Madrid or a team from Madrid. The only exception to this came in 2009/10 when Rafa Benitez’s side dropped out of the group stage and subsequently lost a Europa League semi-final to Atletico.

However, despite the history, the Reds’ upcoming trip to the Wanda Metropolitano promises to be far different to their last one.

Diego Simeone’s Atletico are European stalwarts, and while Liverpool should rightly fear no one, the draw was largely met with a degree of apprehension. 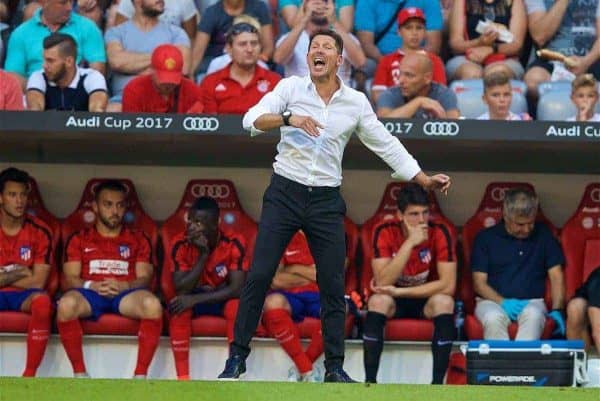 The commonly voiced concern is that Simeone’s men are a notoriously brutal and tenacious team to play against that break forward quickly.

This Atleti is the same club that rode an infuriating ‘win at all costs’ playing style to a shock LaLiga title, two Champions League finals and a Europa League triumph, all in the last six seasons.

But is this still the same team? The answer is quite clearly no. Yes, Simeone is still the architect, but the foundations upon which that Atletico Madrid were built on has crumbled, or in Antoine Griezmann’s case, fallen away.

Between them, the names that were synonymous with Cholo’s Atleti—Diego Godin (277), Gabi (297), Juanfran (243), Griezmann (180), Fernando Torres (107 in his second spell) and one-time Chelsea left-back Filipe Luis (240)—played a joint 1,558 games for the club. Now they, along with promising talents Rodri and Lucas Hernandez, have left.

Simeone has had it all to do. He has needed to both re-establish an imperious backline and, perhaps more importantly, also regain the fluency going forward that Griezmann provided so naturally.

The high-profile recruitment of teenage phenomenon Joao Felix has been one method, while bringing Marcos Llorente in to fill a Rodri-shaped hole at the base of midfield has been another. 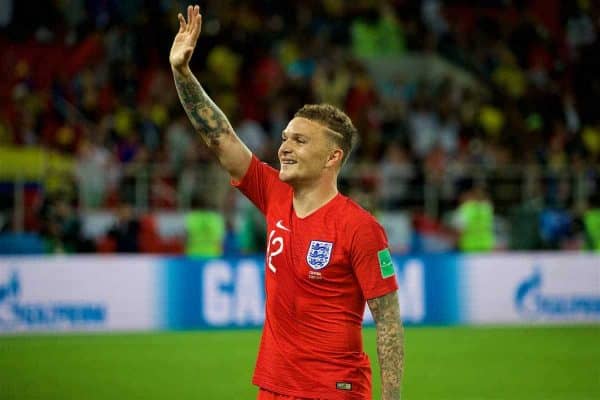 Perhaps most surprisingly has been Simeone’s move to sign a set of high-flying, overlapping full-backs in Renan Lodi and, astonishingly, Kieran Trippier.

So has the rebuild worked? Is this the same Atletico? What can Liverpool expect?

Significant arrivals in the summer, in particular Felix and Llorente, brought a significant sense of optimism to the Wanda Metropolitano.

However, now in the latter half of the season, a different mood is tangible. Underwhelming Liga results, recurrent injuries and wavering form, both domestically and in continental competition, have underscored that Atleti are a team in that dreaded phase: transition. 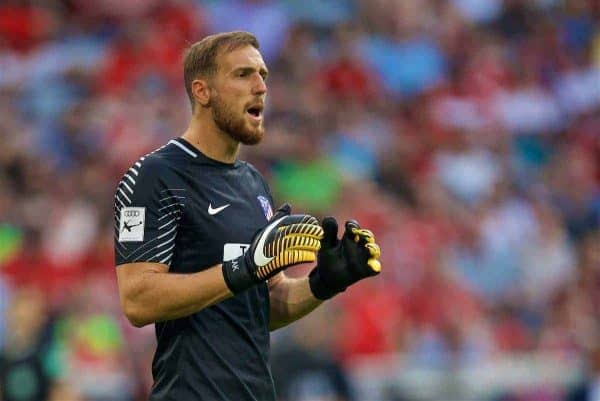 Predictably from a Simeone team, they’ve still been defensively tight and tough to play against.

Only leaders Real Madrid have conceded fewer goals than Atletico (17 in 24 games) in LaLiga this season. While Jan Oblak’s ever-presence has clearly been significant, the defence has been impressive despite significant injury setbacks to Stefan Savic and Jose Gimenez.

Felipe and Mario Hermoso, both brought in during last summer, have deputised solidly at centre-back. With Savic now returning from a hamstring injury however, one, potentially the slighter and younger Hermoso, will likely be replaced for the Liverpool clash; Gimenez could also feature.

Given this solidarity, the main area Liverpool will be looking to exploit is the space left behind both full-backs.

Injury woes at right-back will mean Simeone’s first-choice option, Trippier, will miss the first leg with injury, leaving a returning Santiago Arias to play across from Renan Lodi, with the rusty Sime Vrsaljko in reserve.

Trippier and Lodi’s ability to overlap and deliver into the box has been integral to the good Atleti moments this season, but if Simeone seeks to play the same way with Arias, Andy Robertson and a fit-again Sadio Mane could be relishing the opportunity to run at and past the Colombian. 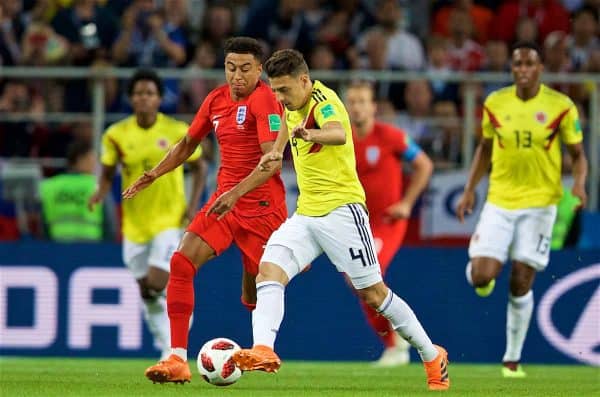 How well Arias can manage their pace in the first leg and how sharp Trippier is on returning in the second leg should ultimately prove the first of three crucial areas where the tie will be won or lost.

One element that does bear mentioning is the grit and determination of Atleti’s whole defensive unit. All of these players are very capable of slowing the game down, using tactical fouls and aggravating the opponent.

Liverpool have become accustomed to having to work to break teams down, but if Atleti are protecting a lead they will become an incredibly frustrating team to crack.

Simeone has deployed a 4-4-2 diamond for big clashes against Real Madrid and Juventus this season, although recently he seems to prefer a flat 4-4-2, with the full-backs potentially pushing up to overwhelm Liverpool’s three-man midfield.

Key to Atleti’s defensive success this season has been Thomas Partey. Playing at the base of a diamond or in the middle of a flat 4-4-2, Thomas has completely marginalised big-money signing Llorente.

A mixture of Fabinho-style disruption to shield the centre-backs with an incredible ability to play longer, diagonal passes, similar to some of Jordan Henderson’s best balls, has made him integral to Atletico’s play.

More than any other midfielder’s influence, how much Thomas can play this role against Liverpool’s press, especially that of Henderson, will be the second crucial area of the game.

On the left and right, Koke and Saul Niguez remain Simeone midfield royalty, while the manager has also built depth in the wide positions by re-signing Yannick Carrasco to deputise. 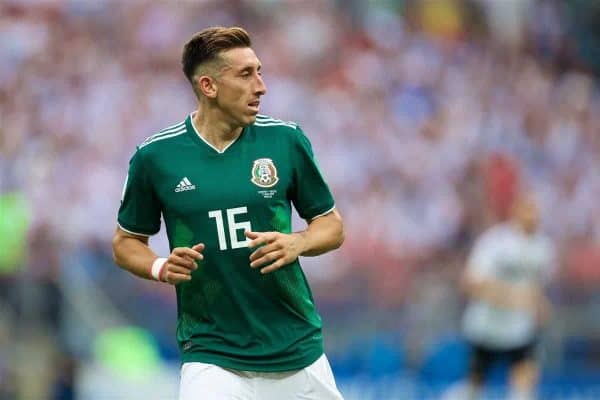 On Tuesday night, we can expect to see one of the defensive-minded Llorente or the more attacking box-to-box midfielder Hector Herrera (who has previous experience against Liverpool, with Porto) playing alongside Thomas in a flat formation.

The luxury of choice in the flat 4-4-2 will appeal to Simeone, but far more significant will be his uncertainty as to who should play at the tip if he opts for a diamond.

Both Vitolo and the incredibly disappointing Thomas Lemar have been tried this season to underwhelming results, while the impressive Angel Correa has been pressed into playing up front due to injury issues upfield.

Henderson, in the form of his life, hopefully partnered by a fit-and-firing Fabinho, will be a mighty tough ask for this Atleti midfield to play through, and again it is likely Atleti will look to the wings for creativity. 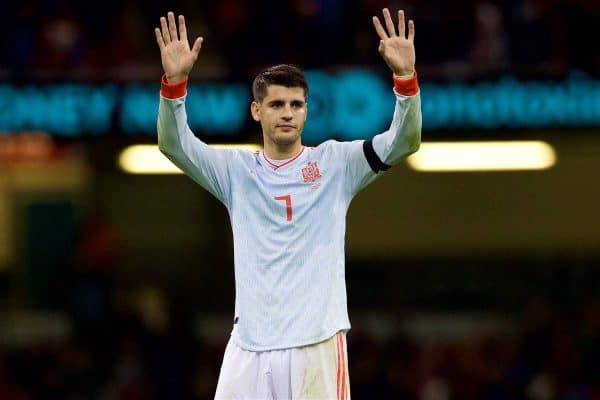 Currently, their points in the league are their lowest at this stage since Gregorio Manzano was sacked in 2011 and they sit below Getafe in the table. Twenty-five goals from these first 24 games, their fewest under Simeone, is telling as to where the problem lies.

Atleti are currently experiencing an injury crisis up front with Felix, Alvaro Morata and Diego Costa all doubts for the first leg, in some capacity.

However, these issues only tell half the story, as the three forwards between them average just one goal every 312 minutes in LaLiga. Costa has appeared absolutely finished at the top level, while too often Felix has seemed to require more time to grow into his role this season.

While his dribbling has been impressive, his shot conversion has left a lot to be desired, and his profligacy has been a frustrating watch for Atletico fans.

Morata, a lightning rod for criticism given his record at Chelsea, is actually Atleti’s top scorer by some distance with seven goals.

Correa, almost the last man standing in terms of viable striker options, has then chosen a timely period to come into a patch of form.

More comfortable when attacking from a wider position, Correa will likely be the main attacking threat that Peter Krawietz and Pepijn Linders will have been discussing with Klopp.

In particular, his ability to drive quickly into areas of space on the edge of the box and cut balls back across the face will likely have been identified as a danger.

How Virgil van Dijk and Joe Gomez can shackle Correa and stop him from doing just that looks to be the third key battleground across the two legs, particularly if Morata makes a return for the Anfield trip.

Gomez, who looks to have settled well beside Van Dijk, will have to be especially alert to stopping Correa from going past him and ensuring he doesn’t switch off to late runs when Atleti have the ball on the wide edges of the box.

Getting Ready for a Fight

This Atletico Madrid side is feeling the pressure. The last month saw them lose the Super Cup final, the Madrid derby, crash out of the Copa del Rey and get outgunned by 16th-placed Eibar.

Simeone has, perhaps for the first time since he took the job, been facing the possibility of the sack, as he approaches a decade in charge.

While this might seem an ideal time to play a walking-wounded, woefully out-of-form Atletico, Reds fans need to be wary. They are perhaps forgetting the essence Simeone built this team upon.

Each Atleti player, particularly older hands such as Koke, Saul and Costa (if he plays) will be told to go out and fight for the shirt, fight for respect and fight to progress.

Liverpool, who so often this season have been calm and collected in the face of adversity, will need their senior players such as Henderson, Van Dijk and Gini Wijnaldum to keep the team cool and focused.

Failure to do so could so easily allow Liverpool to fall at what will become an increasingly common challenge: beating elite teams who are no longer on their level.

* This is a guest article for This Is Anfield by Thomas Bolton. Follow Thomas on Twitter, @thomasboltoff.