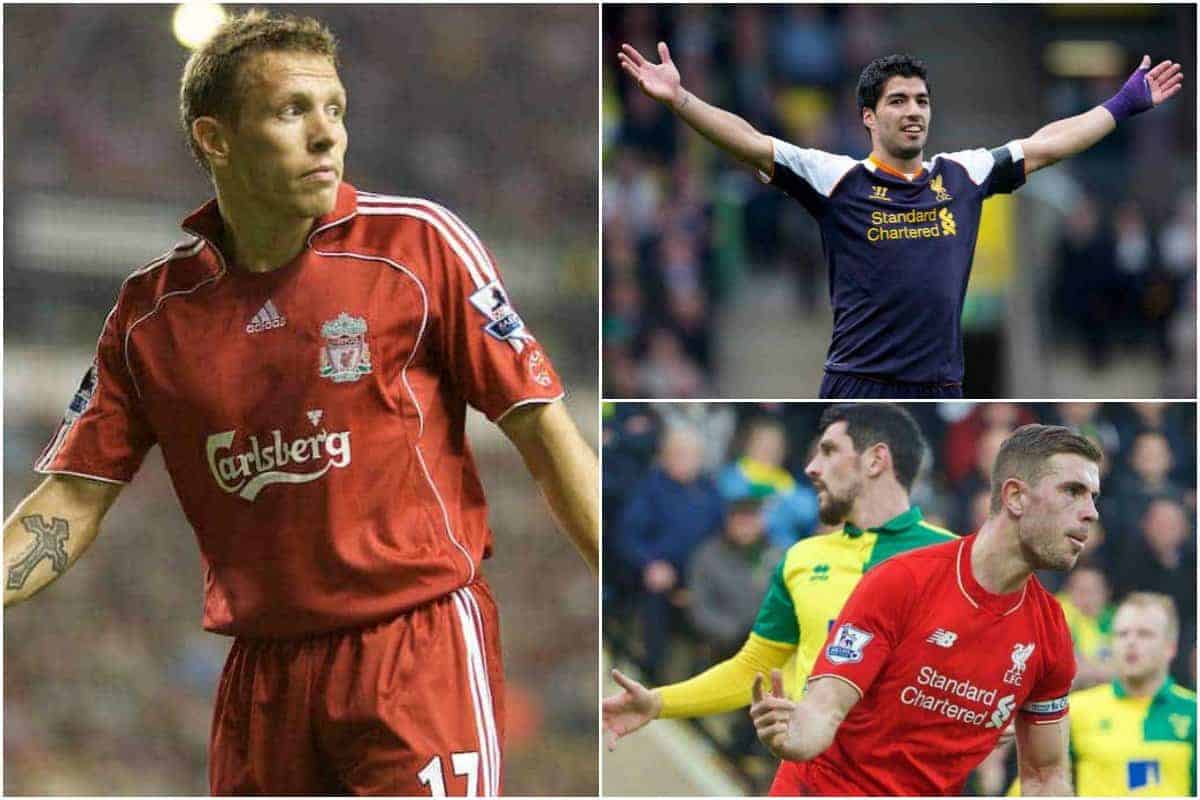 At first glance, Liverpool and Norwich City don’t have too much in common—other than currently bookending the Premier League table. But there’s plenty of connection there throughout the history of both clubs.

The Reds return to action after a winter break which made headlines for many strange reasons and their first opponents back are Norwich.

Back on the opening night of the season, Jurgen Klopp‘s outfit triumphed over the Canaries and haven’t lost a league game between now and then, while Daniel Farke’s team, impressive at Anfield, went on to beat Man City soon after—before sinking to 20th in the league.

They’re fighting relegation while the Reds chase the title, pointing to the obvious differences in size and standing, but the two clubs have also shared moments in history and football personnel of some note through the years.

Here’s a look at how the two have become strangely linked, often with long gaps in between but always with notable results when they collide.

The Spion Kop, the most famous stand in English football, the most storied and historical end of a ground at which many a memorable goal has been scored.

And yet, the last goal scored at the old Spion Kop end, before it was made all-seater, was not netted by a Liverpool player, but against the team.

Norwich were the visitors and Jeremy Goss the goalscorer, a thunderbolt into the top corner in a dismal 1-0 defeat on an emotional occasion in the early 90s.

That the Reds’ best second-half chances to change that piece of history fell to the likes of Neil Ruddock, Julian Dicks and Don Hutchison, rather than others who played including John Barnes, Ian Rush or Robbie Fowler, says much about the time and the state that the club was in.

Transfers directly between the Reds and the Canaries have been few and far between, with just four taking place across the entirety of both teams’ histories.

Anyone remember Doug Livermore? He was one of the four, and played a notable role at both clubs…on and off the pitch.

A local-born player who broke through in the late 60s, Livermore made a handful of appearances for the Reds before transferring to Norwich to continue his career. There he reached a cup final and won a Second Division title, playing well over 100 times for the club.

Later, after retiring, he coached the reserves at Norwich and worked his way back up to what was, by now, the Premier League—and in 1994 became Roy Evans’ assistant when he was manager at Liverpool.

Livermore remained with the Reds until Gerard Houllier took over sole charge, departing with Evans, before once more returning to Norwich as assistant to four managers in succession: Bruce Rioch, Bryan Hamilton, Nigel Worthington and Peter Grant.

Maybe not a personality remembered by too many, but one who served both clubs in significant ways behind the scenes.

Of course, even those who aren’t managers and players are in the limelight these days—such as Michael Edwards, Liverpool’s transfer guru, laptop owner and air conditioning lover, the absolute hero.

Norwich have their own version: Stuart Webber, a highly respected sporting director who uses data analytics and his own knowledge of the game to sign under the radar players of the type who helped Norwich progress back to the top flight.

Want to hazard a guess at which big club Webber first made his name? That’s right, Liverpool.

The Reds took him from Wrexham when he was still in his 20s and made him Director of Recruitment at Academy level, responsible for bringing in young talent when the likes of Kenny Dalglish and Rafa Benitez were manager.

One of the players Webber helped bring to the Reds was Raheem Sterling.

It’s reasonably incredible, then, that one of those trophies brought to an end a quite remarkable dominant run by one team in particular…Liverpool.

Back in the 80s, as the Reds regularly racked up visits to Wembley, we won four consecutive League Cup finals between ’81 and ’84. No team has ever matched that feat.

But in 1985, the run was ended as a new team won the trophy…Norwich, who hadn’t won a single cup in 23 years at that point…and haven’t won another one since.

Oh, remember about only four players transferring between the clubs? Another one of the quartet went by the name of Dave Watson; he was an academy player for the Reds who never played a game and later played well over 400 matches for Everton.

In between (and in his entire career), he played for only one other club, Norwich. Guess who was their captain in 1985 to lift the trophy and end Liverpool’s four-year win streak?

It’s not even football 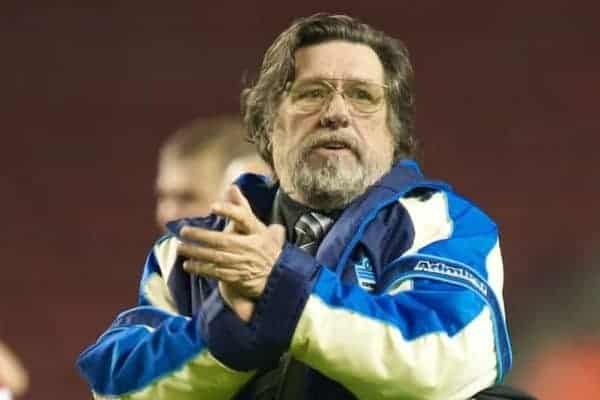 Like a defender sent for some chips by a Roberto Firmino piece of skill, we’re suddenly miles away from real football and into the world of pop culture.

Actor Ricky Tomlinson is a massive Red, as many tend to be.

Two particular, albeit exceedingly different, roles come to mind when he is spoken about: his portrayal of a father whose son is lost in the 1989 stadium disaster, in Hillsborough, and his career as a football coach in Mike Bassett, England manager.

The former is of course entirely linked with Liverpool; the second sees Tomlinson take over the national team after success with a lower-league outfit—Norwich.

How they hated Suarez

Well, we could hardly let this piece pass without a mention for the nightmare himself for all people of a yellow persuasion, could we?

The absolute lunatic knocked in a frankly outrageous 12 goals in just six games against them, including a record-breaking hat-trick of hat-tricks.

Three at the end of 11/12 gave the Reds a 3-0 win at Carrow Road, then five months later he did exactly the same again, at the same ground, as the Reds won 5-2.

Goals from the halfway line, free-kicks, individual brilliance, outrageous lobs…he could, and did, do it all against John Ruddy and Co. 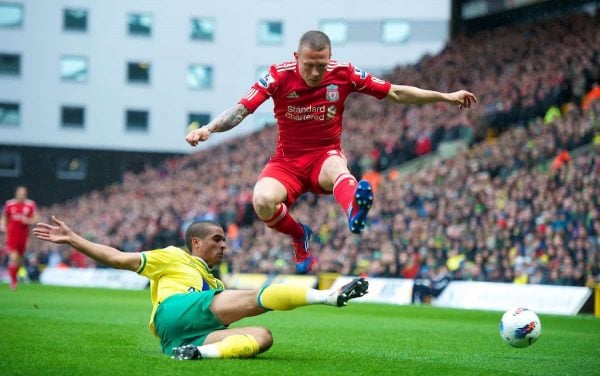 As mentioned, direct transfers between the clubs have been few and far between. In the modern era, only two young Reds prospects have made the switch: defender Dani Ayala, now with Middlesbrough, and Sergi Canos, now at Brentford.

But there have been a host of players, old and recent, who have played for both clubs along their respective career paths.

The most notable is probably Craig Bellamy, who came through the academy at Norwich and went on to have two separate spells with Liverpool, while another forward of the same era, Peter Crouch, had a loan spell at the Canaries early in his career, well before moving to Anfield.

Then there have been the young talents loaned to Carrow Road to aid their game time, which include Dani Pacheco, Andre Wisdom and Nick Tanner.

At the other end of the scale, Jan Molby had a brief loan at Norwich from the Reds towards the end of his career, while even more have found a home in East Anglia further down the road after departing Anfield. David Fairclough, Zak Whitbread and Jon Otsemobor all fall in this category.

Finally, the game which probably made most people realise that Liverpool under Jurgen Klopp was going to be one hell of a mad ride.

A back-and-forth game at Carrow Road in January 2016 saw the Reds lead, fall behind, retake the lead and give up a last-minute equaliser—only for Adam Lallana to go and notch a winner deep into stoppage time.

Cue bedlam in the away end, broken glasses making headlines for days afterwards and a fair few very, very irate members of staff and stewards for Norwich who had muttered all game long about how poor and annoying Liverpool were, right behind the press box.

Now, what might this upcoming fixture add to the annuls of history between the sides…