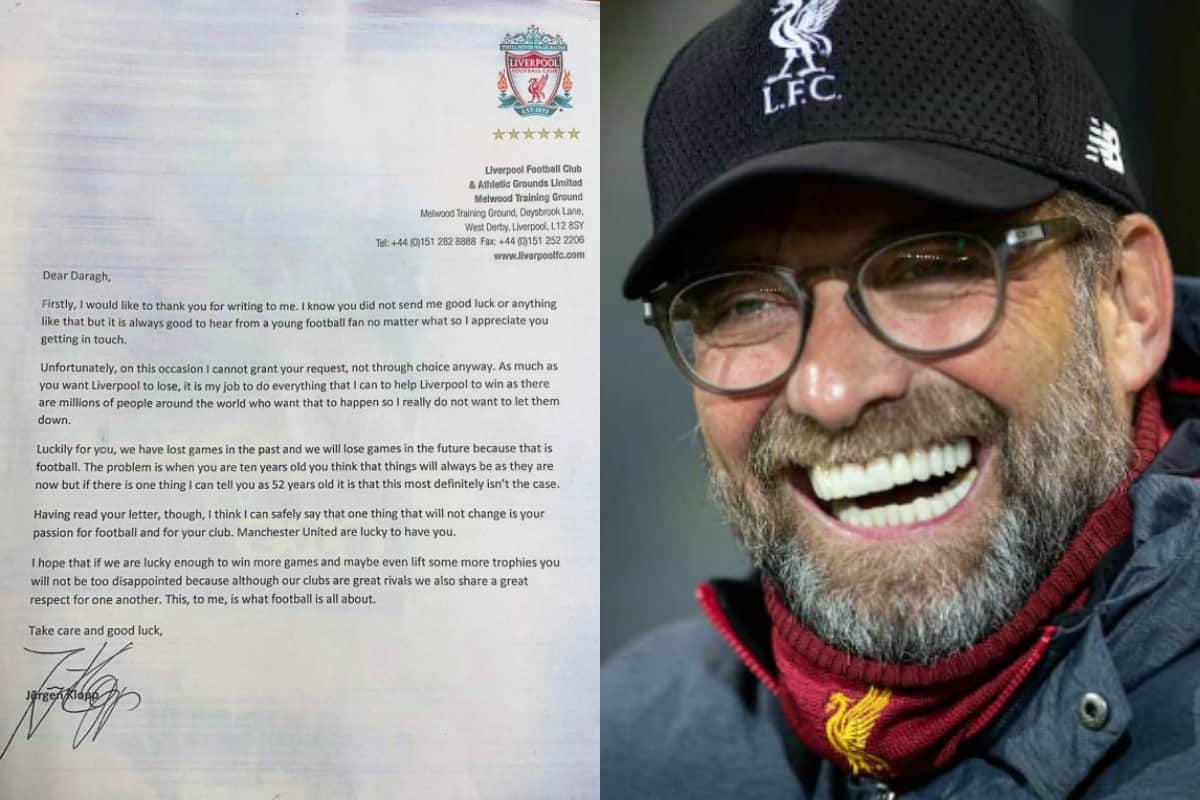 Liverpool’s inevitable title triumph has not been mutually celebrated outside of the club’s walls and Jurgen Klopp has provided a heartwarming response to one young objector.

The Reds are currently positioned 22 points ahead of the pack in the Premier League table, ensuring it is simply a case of when Liverpool are crowned champions as just five more wins are needed to do so.

The end of a 30-year wait for a title is upon us in part thanks to a run of 43 league games without defeat.

And while those of the Liverpool persuasion are starting to allow the inevitable to settle in their minds, one 10-year-old Manchester United fan has gone straight to the source to stop Liverpool in their tracks.

Daragh Curley, from Donegal, sent a letter to Klopp to ask him not to “win the league or any other match again” as part of a school assignment.

In the letter, he wrote: “Liverpool are winning too many games. If you win nine more games then you have the best unbeaten run in English football. Being a United fan that is very sad.

Klopp wrote a personal letter back and it's brilliant! pic.twitter.com/MzsWY346U7

“So the next time Liverpool play please make them lose. You should just let the other team score. I hope I have convinced you to not win the league or any other match again.”

And while he could not grant his wish, Klopp did get back in touch with a heartwarming reply which praised Daragh for his passion for the game and his club which, at the end of the day, is what football is all about.

Klopp did look to comfort the youngster by acknowledging that the unpredictability of the sport will at one point see his side lose, but conceded his hands were tied as his job is to ensure Liverpool win as often as possible.

“Unfortunately, on this occasion, I cannot grant your request, not through choice anyway,” Klopp wrote in his reply.

“As much as you want Liverpool to lose it is my job to do everything that I can to help Liverpool to win as there are millions of people around the world who want that to happen so I really do not want to let them down.

“Luckily for you, we have lost games in the past and we will lose games in the future because that is football.

“I can safely say that one thing that will not change is your passion for football and for your club. Manchester United are lucky to have you.

“I hope that if we are lucky enough to win more games and maybe even lift some more trophies you will not be too disappointed because although our clubs are great rivals we also share a great respect for one another.

“This, to me, is what football is all about. Take care and good luck, Jurgen.”

Klopp’s reply, which left Daragh’s family shocked, was a brilliant gesture and one which epitomises the character he is.