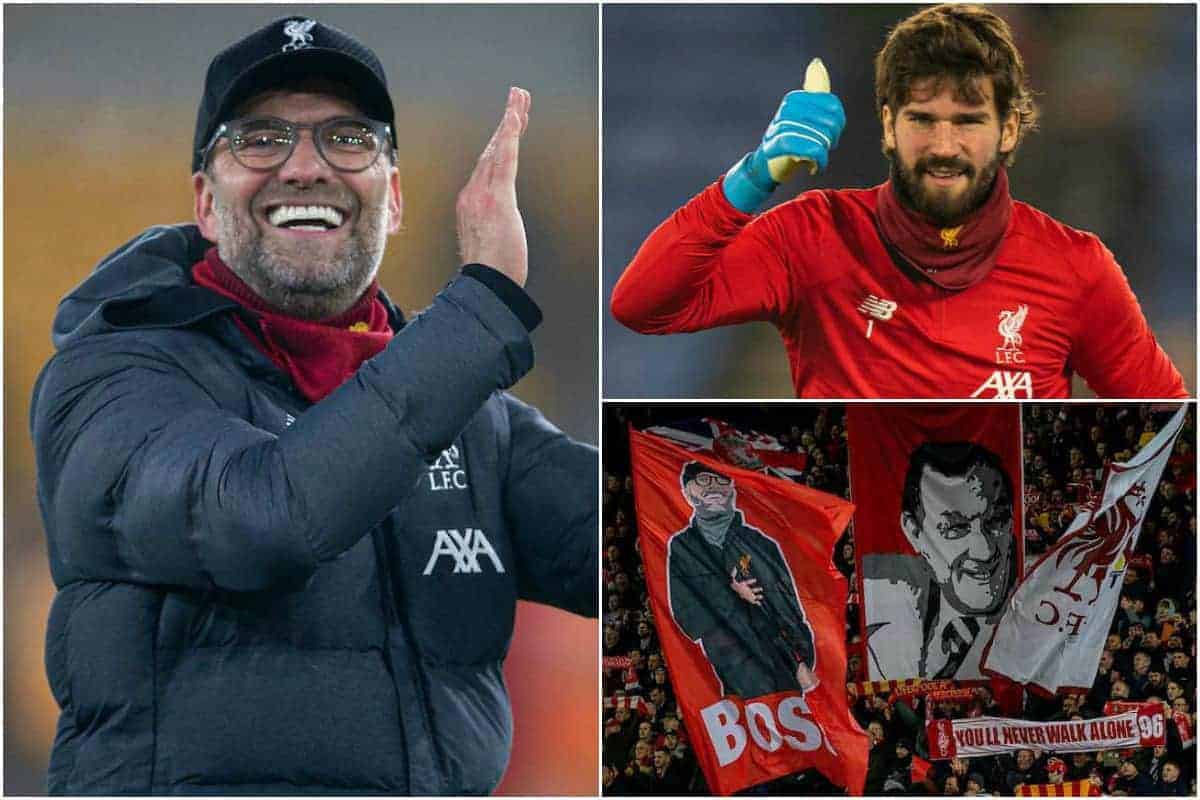 Since arriving at the club in 2015, Jurgen Klopp has preached the need to develop togetherness and harmony; Alisson explains how that is very much the case, on and off the pitch.

The boss is a massive believer in having everyone pulling in the same direction and working together on the same cause.

That’s not just restricted to the coaches and players, but with the stars of the show acknowledging the work put in by admin staff, by Academy personnel, by data providers, senior management, kitchen workers and everyone in between. And the fans, of course.

Right now the atmosphere around the club and the happiness at the direction being taken is a complete 180-degree turn from the infighting and despair seen toward the end of the Rafa Benitez era, the apathetic Roy Hodgson reign and even, in smaller amounts, during Brendan Rodgers’ stay after Kenny Dalglish‘s departure.

An awful lot of that was down to inept ownership, but there was also a lack of linear co-working between the different hierarchical levels of the club.

All that has changed now, with board and management working in harmony, players and fans having a tremendous relationship and every aspect of club life geared toward success on the pitch—which everybody wants.

Speaking with Premier League Productions, Reds ‘keeper Alisson Becker has insinuated that it’s this very approach which has led to improvements being made. Specifically with players all working for each other, filling in for each other and pushing each other to progress.

“We want to win the title and for winning the title, you need to win everything,” he said. “We are just looking for our main goal and what is behind is behind.

“We have to focus on our quality. We have an amazing group with amazing players – one goes out, the other comes in.

“Adrian, for example, when I got injured, he comes in and performed really, really good. An example of the other boys, Fab goes out and another one comes in and it’s the same. Everybody helps a lot on the pitch.”

But it’s not just about being good and working hard, and that’s where Klopp’s single-entity approach comes into play.

If the fans are the lifeblood of a club, it’s their own mindset and mentality which should be mirrored throughout—and it certainly seems to be the case right now.

Anyone would be hard-pushed to find a Liverpool supporter who was not enjoying themselves right now when it comes to the Reds; top of the league, champions of the world, Europe and soon the Premier League, unbeaten and breaking records right, left and centre.

Add in having a fantastic team to watch and performance levels as good as anything seen before in the entire history of the club and the word which should sum it up best is a simple one: enjoyment.

Alisson says that’s exactly what the players feel, too, and it’s because of that feeling that they’re able to perform at their ridiculously high levels on a regular basis.

“In Brazil we always say that you need to enjoy the game to be happy playing football because football is happiness.

“Of course you need to be serious because you are in a competition of a high level, but you need to enjoy.”

There are few smiles in the league as big as those possessed by the likes of Alisson, Bobby Firmino, Sadio Mane and Klopp right now.

But they are certainly matched by those in the stands and watching from afar, as the Reds power toward a long-awaited Premier League title. Enjoy it, Reds.