Liverpool survived a surprisingly tough night at Anfield as they fought back from 2-1 down to secure a 3-2 victory over West Ham, to edge closer to the title.

On a night when West Ham fans released black balloons as a marker of their discontent at the club’s current ownership, Liverpool produced a display that showed the fighting spirit of their own, more successful regime.

Naby Keita was the only change for the Reds, and it was his driving run, with a pair of one-twos, which unsettled the Hammers’ defence and ultimately allowed Trent Alexander-Arnold to spin a cross in for Gini Wijnaldum to head home, Barca style.

The celebrations had only just calmed when the visitors were level, however, and it came through another header, as Issa Diop powered in Robert Snodgrass’ corner.

It was certainly an agricultural affair in the first half, with both sides trading corners throughout, Snodgrass enjoying a running battle with Andy Robertson, and Michail Antonio serving as West Ham‘s linchpin.

Liverpool’s next-best chance came, fittingly, from a corner, with Virgil van Dijk finding the roof of the net with a header from the edge of the six-yard box, as the Reds aimed to fight fire with fire. 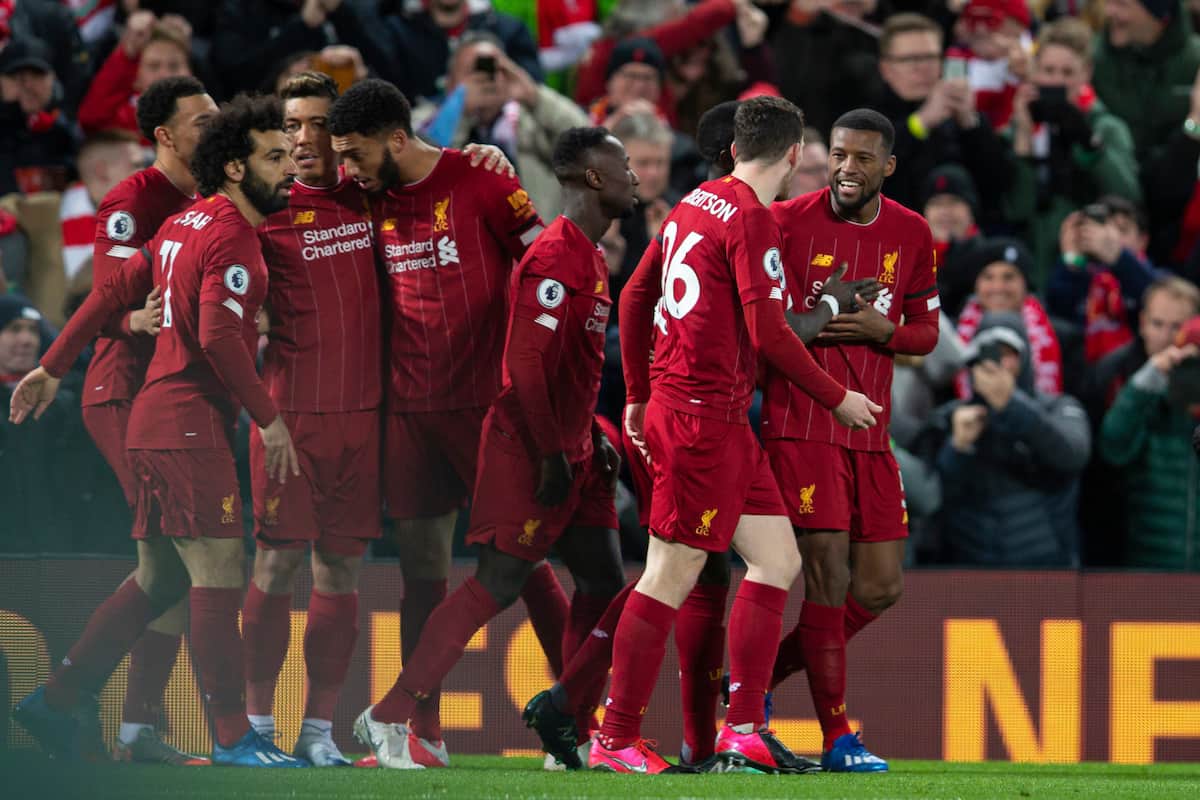 A yard off from midway through the first half, the Reds continued in that vein in the second, and were punished early on as substitute Pablo Fornals turned in Declan Rice’s cross for 2-1.

Klopp responded by replacing Keita, who had faded worryingly after a bright start, with Alex Oxlade-Chamberlain, and soon after the tempo lifted as Anfield found their voice.

It took a measure of fortune to find their equaliser, but it didn’t take long, as Mohamed Salah swept in Andy Robertson‘s cutback cross, via the weak wrists of Lukasz Fabianski.

And Liverpool made their quality pay with time to spare, as Joe Gomez‘s deflected shot landed for Alexander-Arnold in the box, and with the right-back lifting the ball over Fabianski, Sadio Mane was there to finish.

Mane had the ball in the back of the net from another Alexander-Arnold delivery soon after, only to be ruled out for offside, with the Reds forced to hold on to a one-goal lead for the three points as the win requirement dropped to four.