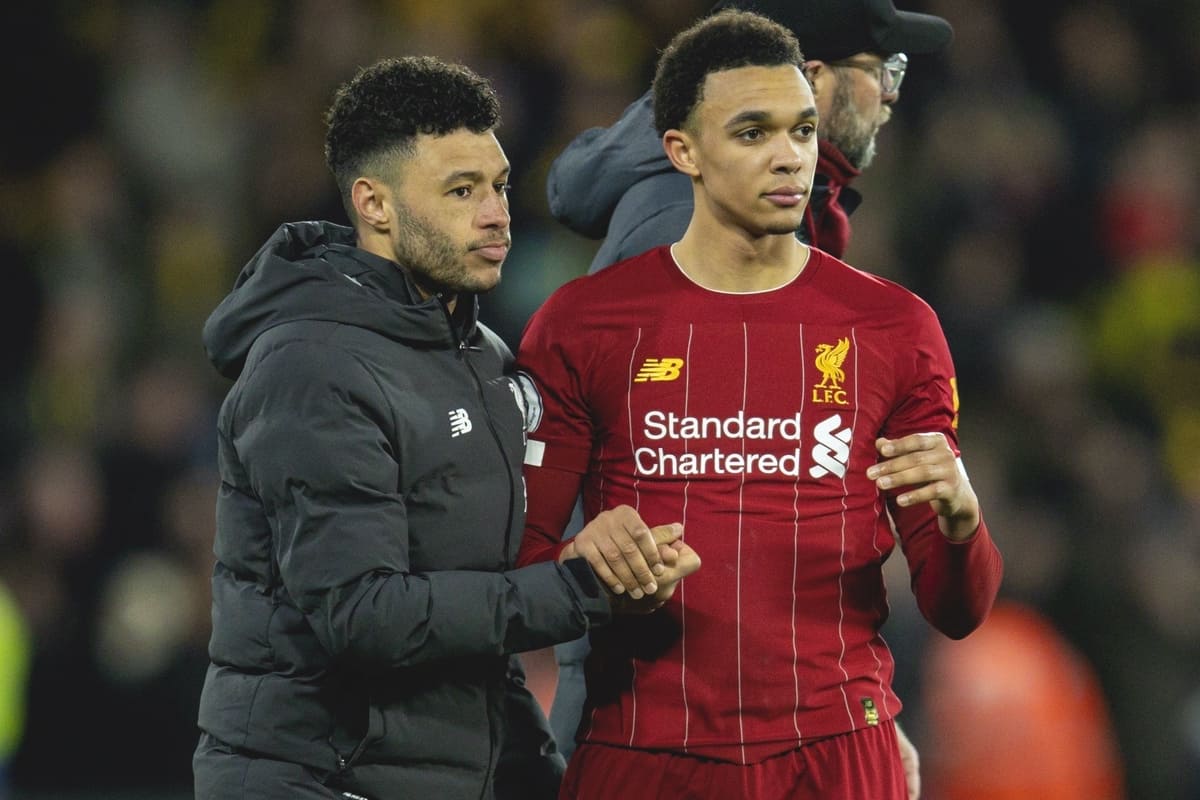 Liverpool produced one of the worst performances of the Jurgen Klopp era on Saturday, losing 3-0 at Watford and seeing their unbeaten run go up in smoke.

The end of Lovren’s Liverpool career?

When the starting lineups were announced before kickoff, there was understandable trepidation surrounding Dejan Lovren‘s inclusion in place of the injured Joe Gomez.

Perhaps this seemed harsh, but in the 90 minutes that followed, the Croatian showed precisely why that concern was merited.

In a career littered with forgettable displays, Lovren put in one of his worst in a Liverpool shirt, finding himself bullied by Troy Deeney all evening.

Not only that, that 30-year-old was woeful in a positional sense, poor on the ball and making everyone around him appear nervous.

He played a negative role in Watford‘s first two goals, not being strong enough against Deeney and showing a lack of pace and awareness for Ismaila Sarr’s second of the night, and he got worse as the minutes ticked by.

You have to wonder if that’s put the final nail in Lovren’s coffin at Anfield.

It is worth noting that Virgil van Dijk was also very poor, and it would be harsh to blame Lovren solely for the appalling team performance, but it is no coincidence that Liverpool finally lost with him starting.

Fabinho a shadow of himself 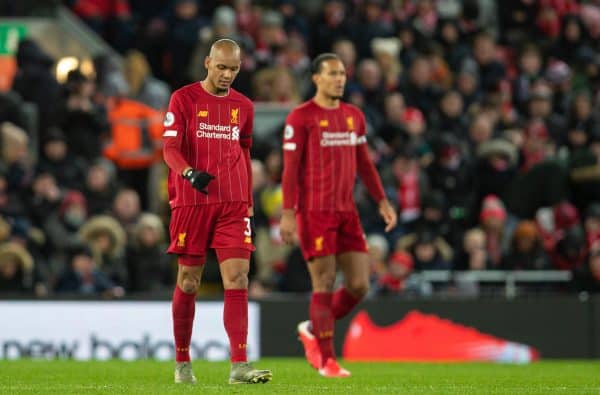 Fabinho‘s injury back in November was widely considered a major blow, with the Brazilian a truly colossal influence for the Reds.

Klopp’s men excelled without him, however, winning every Premier League game, not to mention Jordan Henderson finding arguably his best-ever form back in the No. 6 role.

Since his comeback from injury, however, Fabinho has been a shadow of that player, and he was wretched against an inspired Watford side.

His pre-Christmas physicality, quality in possession and masterful reading of play were nowhere to be seen, and the likes of Etienne Capoue and Abdoulaye Doucoure comfortably got the better of him.

At times, the Brazilian appeared to be running in treacle, and along with the infuriatingly ineffective Gini Wijnaldum he offered nothing.

Fabinho will return to his best eventually—he is far too good not to—but at the moment he is miles off the pace by his high standards.

Henderson’s absence has hurt this time while Fabinho has returned, in an ironic twist. 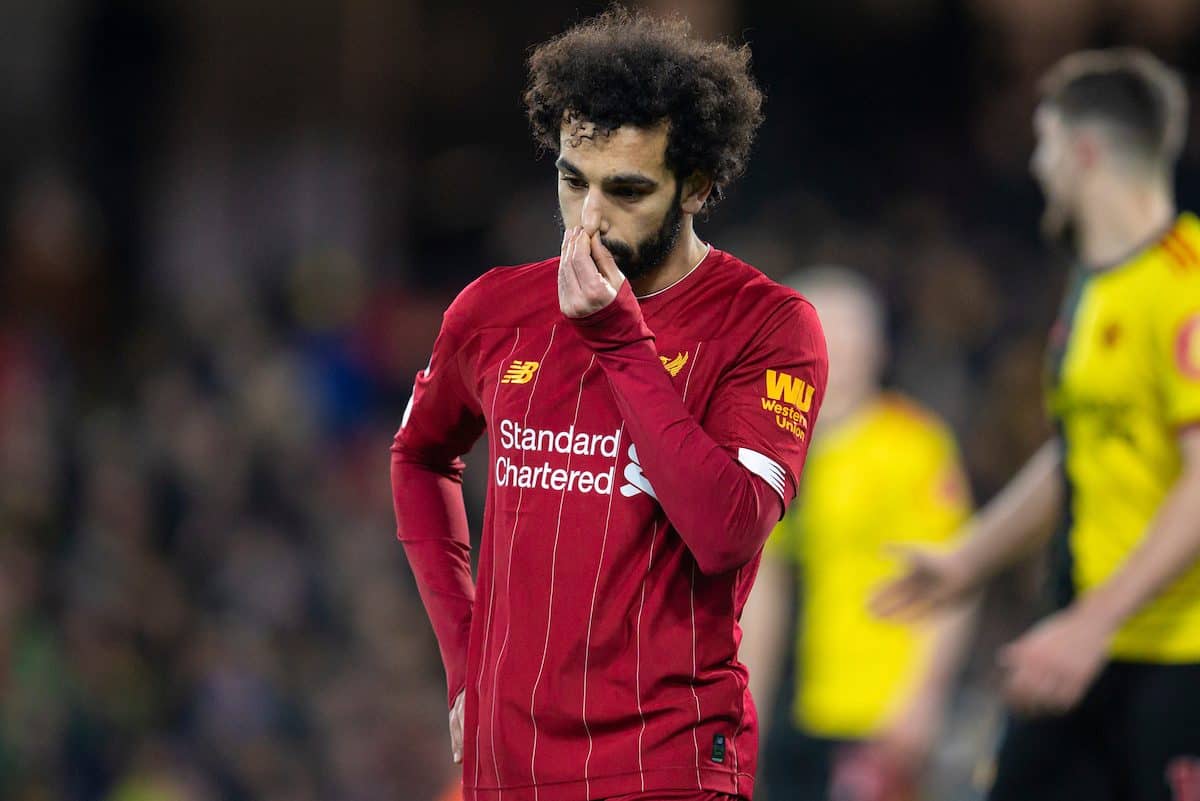 Can you ever remember Mohamed Salah, Sadio Mane and Roberto Firmino all being so poor in the same game?

On a night when Liverpool were almost unfathomably poor, their much-famed front three played like reincarnations of Andriy Voronin, Milan Jovanovic and David N’Gog.

Salah’s use of the ball was bordering on laughable, averaging just a 58 percent pass completion rate, and he never looked like making anything happen.

Forgetting the goalscoring statistics for one second, this has been a negative hallmark of the 27-year-old’s game all season.

Mane and Firmino were no better, running into brick walls, proving loose in possession and simply never providing their usual energy levels.

Footballers aren’t robots and sometimes it just all goes wrong—that being said, for three genuinely world-class players to be so bad was not good enough.

The trio haven’t been as devastating together in 2019/20 compared to the previous two years, despite Liverpool’s remarkable run, and this was their worst outing by far.

Can we never have a mid-season break of any kind ever again, please?

Liverpool’s winter break was seen as a great chance to recharge the batteries, returning in peak shape and ready for an onslaught across three competitions.

Instead, the Reds’ rhythm has completely evaded them and they have been below-par in every match since reconvening.

If the Norwich, Atletico Madrid and West Ham games were sloppy, this was another level, with passes going astray, legs looking heavy and cohesion at a premium.

This happened last season, too, with the insipid goalless draw at Man United coming straight after a training camp—it is a frustrating trend that is worrying.

The main concern is that Liverpool don’t return to their top level again this season, especially with Atletico to come in less than two weeks.

This has not been the record-breaking team we were accustomed to watching prior to the players enjoying a holiday.

At half-time, there was a feeling that Klopp’s team talk would have burst his side into life, especially after they returned to the pitch early.

As it turned out, they got even worse.

The Liverpool manager is likely to be raging with what he saw from his players, especially considering his team selection was spot on.

A huge response is now required, starting on Tuesday evening away to Chelsea in the FA Cup, regardless of the team Klopp fields.

If Liverpool don’t go up a significant gear in the coming weeks, they can wave their chances of back-to-back Champions League crowns goodbye, and make harder work of winning the title than they should.