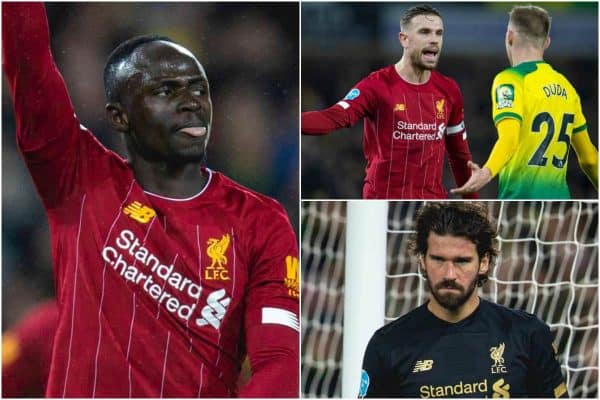 The good, the bad and how many changes for Atletico? – Debating Norwich 0-1 Liverpool

Liverpool’s 1-0 win at Norwich took us a step closer to the Premier League title, but it’s just the start of a busy week for the Reds.

After the winter break gave the chance to rest bodies and recuperate injuries, it was straight back to winning ways for Jurgen Klopp‘s Reds.

Sadio Mane scored the winner and each of Naby Keita, Roberto Firmino and—for Norwich—Alex Tettey went close, but the single goal was enough to secure the three points.

It’s now only five wins needed to secure the title, while attentions also turn to the Champions League last 16 and our trip to Atletico Madrid.

This Is Anfield’s Karl Matchett (@karlmatchett) spoke to Anfield Index podcaster Guy Drinkel (@guydrinkel) and match-goer Chris Prodromou (@chrisprodromou) to get their takes on the afternoon’s events at Carrow Road and what the manager should be looking to change in Madrid.

GUY: Although it was undoubtedly a dominant performance it’s tough to pick out particular good traits from the game, so I’ll start with the obvious.

Sadio Mane! It’s so good to have him back, for me he’s who should win PFA Player of the year and yesterday he proved why, he continues to be such a ‘clutch’ player for us. It was a problem for us whilst he was out as our forward depth is probably one of, if not our only, remaining weakness and you could see the issue in this game: Ox is simply not a winger, and the other options have such as Origi failed to make any starting impact.

My other good, or probably more interesting, point from yesterday was the midfield we had after the first batch of substitutions. For me, Fabinho, Naby and Hendo is a really well-balanced midfield and has all the attributes you’d want in a Liverpool three.

My final good point is just Alisson, look at the majestic man, it’s like having a tamed bear in goal, no wonder Rupp tried to pass it!

CHRIS: Performance levels and points speak for themselves.

Instead I’ll look at the mental strength of this team which is unreal and that’s off the field as well as during matches.

They are not just team-mates, they look like mates off the field as well and I put a lot of that down to Jordan Henderson.

He’s a leader on and off the field and we’ve seen lots of examples of the camaraderie in the squad in videos and social media.

Also I love the way the players appreciate our support and come over to us after every game!

KARL: Both Guy and Chris point out important factors and the best bit is that it’s not just about on-pitch stuff.

The club is very much as one right now and tough games where we have to go the distance just continue to show it.

Specifically from the Norwich game, that Alisson two-on-one save was just outrageous and I thought Keita, while not perfect and definitely should have scored, showed plenty of positives on his first start back.

I also think Klopp used the squad really well here – we need returning players to get minutes and fitness as we’ll need them to go deep in Europe once more, so the changes to lineup and subs were pleasing to see.

GUY: Again similarly to the good, it’s tough to pick out bad points from the game, but I’ll start with a player who got subbed quite early on—especially for Klopp who loves a late sub!

Gini Wijnaldum is possibly the best and most annoying-to-watch player in our squad, as he can be brilliant but he can also be absolutely anonymous.

Unfortunately he was the latter against Norwich. In a tight game in tough circumstances you want a player with undeniable quality to at least get involved and he didn’t at all really. You could see the change in midfield when we brought on Fabinho, Naby and Henderson played higher and got more involved.

Other bad points would probably just be our continued struggles after a break, seems regardless of opponents we, as a squad, rust-up quicker than a bike in a scrapyard.

CHRIS: To be fair I’m struggling to find any negatives at the moment.

With every game being a win that’s as it should be! The club is being run superbly from top to bottom.

Maybe the only worry is if any of the top players may be tempted away for a new challenge after achieving everything with us, but I’m trying not to think about that right now and enjoying the moment.

KARL: Missing a few chances which should be buried, a couple of under-performers and that sort of small issue…they are the ‘bad’ points but as both point out above, it’s rather scraping the barrel.

In fact, it’s more like things which can still be improved further, rather than outright negatives.

I’d imagine that within the squad, the biggest bad points came for the players who can count themselves unfortunate to be left out of the matchday 18 entirely: Matip, Minamino, Curtis Jones, Neco Williams.

They would mostly feel they could or should be involved, but we have such a strong squad and suddenly everyone is fit, which is great for the team and should promote even further competition for places.

Rotation will come once we’ve wrapped up the league, I’m sure!

…and how many changes against Atletico Madrid in midweek?

GUY: I’d make a couple changes for the Atletico game and they’re probably quite obvious ones.

I’d personally like us to start with the midfield I previously mentioned of Nab-Fab-Hendo too, as against Atletico we know it’ll be a defence-first approach from them, and having Fabinho allows more control from one player and you can have Hendo and Naby somewhat unleashed to break them down.

I do think Klopp will keep to his go-to midfield though, which includes Gini, especially in a two-legged tie. Other than that I think it’ll be quite obvious with regards to the 11.

CHRIS: I’d bring in Mane back upfront obviously, and make one change in midfield.

I’d be tempted to go with either Oxlade-Chamberlain or James Milner in midfield, ahead of Naby Keita.

But whatever the boss decides, who am I to argue with who he picks? He’s quite good at his job!

KARL: I think Mane in, Fabinho in; Ox out, Keita out. Both of those can be explosive, important players for us away from home and off the bench.

Add in the choices of Origi or Milner as the game flow dictates, and we’re in a nice, strong position—but it has to be the strongest lineup in terms of tactical control and physical prowess, and that for me means a Fab-Gini-Hendo midfield.

Atletico aren’t as fantastic and defensively perfect as they have been in previous years, so I’d like to see us take the game to them—and that team, with Mane on the pitch for maybe 60 or 70 minutes, should be able to do exactly that.