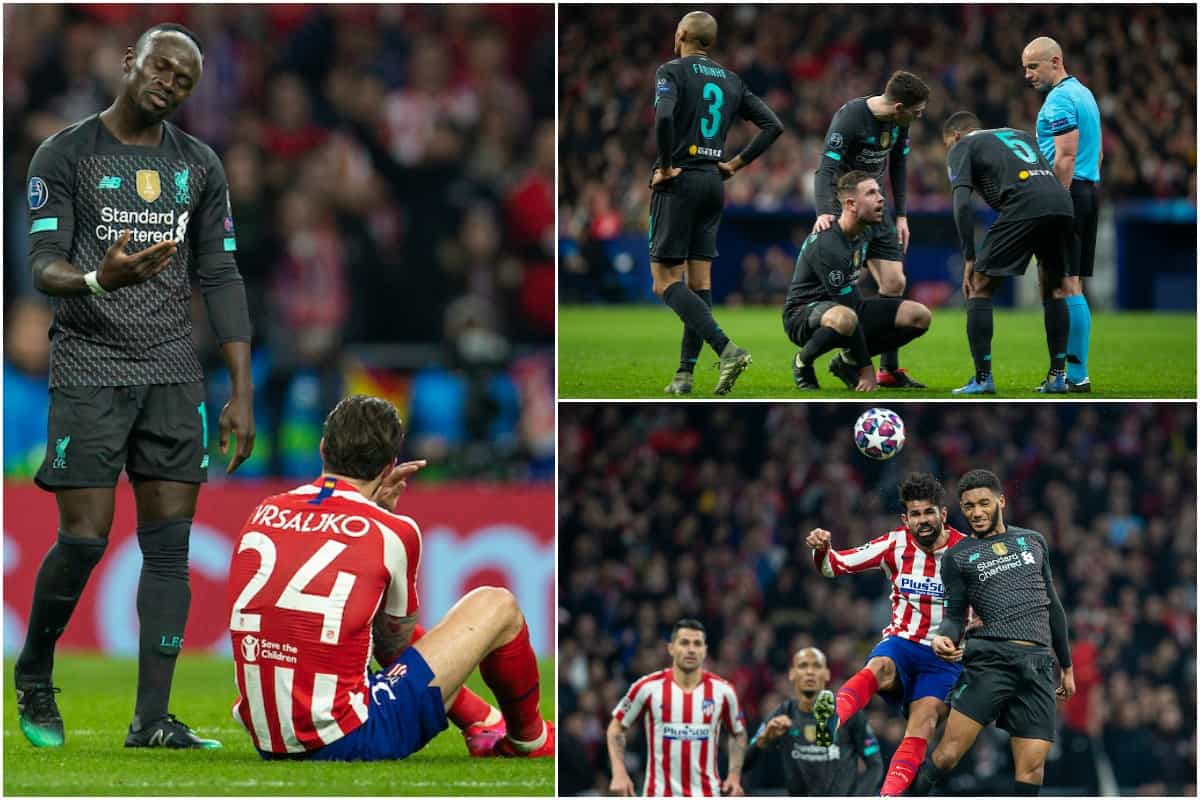 A rare defeat was handed to Liverpool after Atletico Madrid struck early on and held firm, ensuring everything is to play for in the second leg at Anfield.

A return to the Wanda Metropolitano did not replicate similar scenes of celebration for Jurgen Klopp’s men on Tuesday night as Saul Niguez’s early goal left the Reds with it all to do in the last-16 tie.

With Diego Simeone’s side dropping into a defensive wall, Liverpool took ownership of the ball but could do little penetrate the hosts’ line and secure an invaluable away goal.

Frustration simmered among the ranks as Atletico enjoyed a flair for the dramatics and had the referee in the palm of their hands.

It is not foreign territory for Liverpool in the Champions League, however, and the tie now heads to Anfield on March 11 with a place in the quarter-finals on the line.

Here, This Is Anfield’s Joanna Durkan (@JoannaDurkan_) is joined by Jay (@jaytothelo), who was at the Wanda Metropolitano, and David Comerford (@Dave_Comerford) to delve into the positives and negatives from the defeat and discuss the second leg at Anfield.

JAY: It was a good trip to relive some of those memories from the CL Final.

Just walking around it was nice to walk past areas you had memorable moments without 100,000 people hovering around you.

Atlético has an incredible atmosphere, the stadium is great architecturally but also keeps the atmosphere and sound in which is great.

And it goes without saying, but they defended well.

DAVID: Well, without an away goal, it’s difficult to take too many positives, but I thought it was an okay performance overall.

Let’s remember that Atletico are probably the best in the business when it comes to rigid defensive organisation. It’s what Simeone has built his reputation on.

We stayed patient and created two really good chances – first the Salah header and then Henderson’s half-volley. They both went agonisingly wide.

So it was a reasonable effort to break them down, and with such a narrow deficit we’re definitely still favourites.

At the individual level, I thought Joe Gomez was probably our best player – another solid display from him. I also quite liked Fabinho‘s performance, particularly his role in the counter-press and in shifting the ball into dangerous areas.

JOANNA: The tie is very much alive and 1-0 is more than manageable heading back to Anfield.

I have to agree with David, I thought Gomez was the clear standout on the night both on and off the ball, one of the more composed figures and provided, arguably, the ball of the night into the box for Salah.

It’s weird to be talking about a defeat and a game with limited positives, but lessons are learned from these such experiences and this side have proved time and time again that they can bounce back. 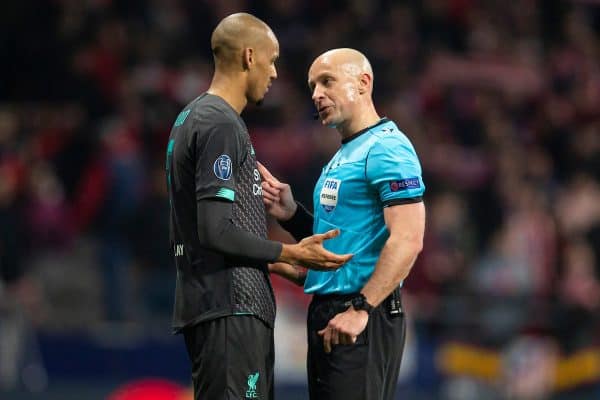 JAY: They were difficult to break down, the referee once again (following PSG) proved to be unable to not be tricked by the opposition.

And the atmosphere was pretty poor in the away end.

DAVID: Ultimately, Liverpool didn’t really deserve anything from the game, but they weren’t helped whatsoever by the referee.

Like Jay, it reminded me of PSG away last year in some respects, because every time he blew he legitimised their dirty tricks. Any significant contact and they were hurling themselves down, with 70,000 screams for a foul.

But I suppose we knew what to expect on that front, particularly after conceding such a poor goal.

As we looked for the equaliser, Salah and Mane couldn’t have an impact on the game. Mane spent the first half on the periphery, and his replacement Origi surpassed his contribution with that ball in for Henderson.

You can forgive Salah for missing the header but that first touch after Oblak fumbled his kick-out was excruciatingly heavy.

Obviously the final point is that the Henderson injury is a real concern. Hamstring apparently – the potential for a few weeks out there. He’s been excellent recently.

JOANNA: The referee takes the headlines in the immediate aftermath. What a shambolic display.

Rewarding play-acting and handing out fouls against us left, right and centre – he had no control and the fact Klopp felt he needed to take Mane off in fear of him seeing red for the smallest of issue says it all.

Aside from that, across the board Liverpool were all just off the pace and far too reactive to the situation – Van Dijk having an obvious off night pretty much sums it up.

The opener was part sloppy defending and part luck for Atletico – their dream scenario and our nightmare as you knew instantly it was then going to be 85+ minutes of attempting to break down the most stubborn defensive unit in Europe.

And Atletico did what they do best, not the style of football many enjoy watching but they get the job done, and they deserve a degree of credit for that but Klopp’s substitutions were questionable – Naby Keita was ideal for the situation we found ourselves in.

And Klopp was quick to say “it’s not over yet,” what are you expecting from the second leg?

They will have another 90 minutes to defend and do theatrics for fouls. We’ll be up for it because of their antics and we can definitely get a good result at home.

It’ll be hard for them not to concede!

DAVID: I think Anfield will be properly up for it, and there’s no doubt that frustration with their playacting will be channelled into extra motivation for the players and fans.

We can’t bank on the atmosphere alone to see us through. In the past, it’s been the decisive factor but I think this time it’s a tactical issue of how to get in-behind a defence which will be halfway up the Kop.

I agree that Keita should start this time. Klopp’s conservative selection is understandable for a European away game but it left us with only one avenue of attack – the wide areas – which they successfully neutralised.

With Keita, we can create from the middle and generally have more variety about our play.

He might naturally slot in for Henderson depending on the injury.

JOANNA: I’m fired up and ready to get to Anfield. It’s got another hair pulling feel to it over the antics they’ll get up to and players and fans alike will need to keep their patience – harder said than done sometimes!

The lack of an away goal is a source of frustration but unless it’s a clanger from us, I don’t seem them scoring.

I’m with David, I think Keita could be key to the second leg – adding a central element to our play which was severely lacking on Tuesday as we played into their hands with both Hendo and Gini shifting wide in midfield.

With the league all tied up, in some way, it’s nice to have this tie balanced in the way it is and after the reaction in their ground, it is fair to say Anfield will be primed and ready for another European showing.