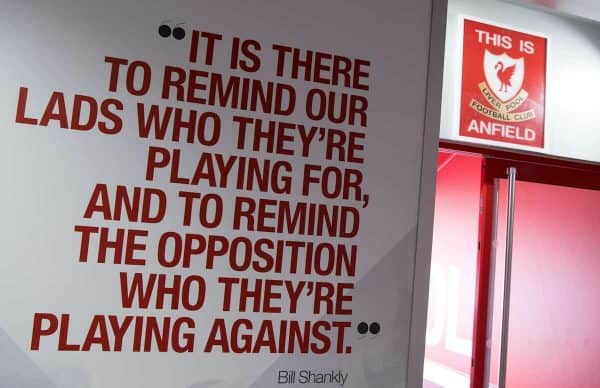 This Is Anfield – The history of Liverpool’s famous sign

Three different versions throughout Liverpool’s history have adorned the Anfield walls, but all held the same message: This Is Anfield.

The words are synonymous with Liverpool Football Club and its place inside the Reds’ spiritual home holds significance across world football.

It is not just a casual motto nor is it a marketing ploy, the words resonate to both players and fans alike and have done so for over half a century.

The ‘This Is Anfield’ sign was first installed by Bill Shankly, but the concept was not one of his own making.

“It was actually recommended to him by a groundsman. The groundsman then went to our then-secretary Peter Robinson and said, ‘listen, let’s put a sign up in the players’ tunnel’,” Danny Dwyer, Liverpool FC Stadium Tour Guide, told This Is Anfield.

“And then Shankly approved it, but the original sign which was recommended said, ‘Welcome to Anfield’.

And so the sign was born and it is one which will forever define the club’s past, present and future.

But the very sign introduced by Shankly no longer takes its place at Anfield and has not done so since before 1974—it instead resides behind the bar at a bed and breakfast in the Isle of Man.

A surprising location for a piece of the club’s history, but it was the first of three versions to be used up until present day.

The second took its rightful place in 1974, the year Bob Paisley succeeded Shankly, and remained in the old Anfield tunnel until 1998.

It bore witness to a prestigious era in the Reds’ history, where 10 league titles, five League Cups, four European Cups, three FA Cups, two UEFA Cups and a Super Cup were all added to the honours board.

Paisley, Joe Fagan, Kenny Dalglish, Ronnie Moran, Graeme Souness and Roy Evans all led their sides out with the sign proudly displayed as the last image seen before the teams walked out onto the Anfield turf.

But it was then taken down in 1998 and would not return until 2012, with the third sign then taking up its position in the intermittent years.

Brendan Rodgers was the man to restore the second sign back at Anfield after digging it “out of a storeroom” merely weeks into the job, before reinstalling it as he looked to it as “a mark of the Anfield of old.”

While the success Rodgers was looking to revive at Anfield did not come during his time at the helm, it has now been present for a new chapter in Liverpool’s history books as Jurgen Klopp’s Red juggernaut ushers in a new era of success.

The Reds’ sixth European Cup, fourth Super Cup and first Club World Cup have all been secured and a long-awaited league title is on its way.

It means the current crop of players can now touch the This Is Anfield sign as they make their way onto the field, having earned the right after adding to the club’s honours board.

It was a condition set by Klopp early in his reign, as he revealed: “I’ve told my players not to touch the ‘This Is Anfield’ sign until they win something. It’s a sign of respect.”

Jordan Henderson was the only player of his current batch of players who was entitled to do so after helping to clinch the League Cup in 2012, but he resisted out of respect for his team-mates and the desire to again achieve success.

Boss wouldn’t let us touch the sign until we won a trophy… now is the time. #ThisIsAnfield ? pic.twitter.com/JxNIKmy1oG

To this day, nearly a year after their triumph in Madrid, only a handful of players have regularly taken up their newfound freedom, with Henderson, Trent Alexander-Arnold, Virgil van Dijk and Gini Wijnaldum headlining the list.

The sign is one which holds a significant place in Liverpool’s history and while opposing managers, players and even Spanish newspaper Marca have claimed “This is Anfield – so what?” over the years, the Reds have more often than not left them eating their own words.

Klopp’s actions showed the significance of the sign and the symbolism of interacting with it.

It is a continued statement of intent first made under Shankly, which has transcended over 50 years, 13 managers, countless players and well over 40 honours—with many more in the pipeline.