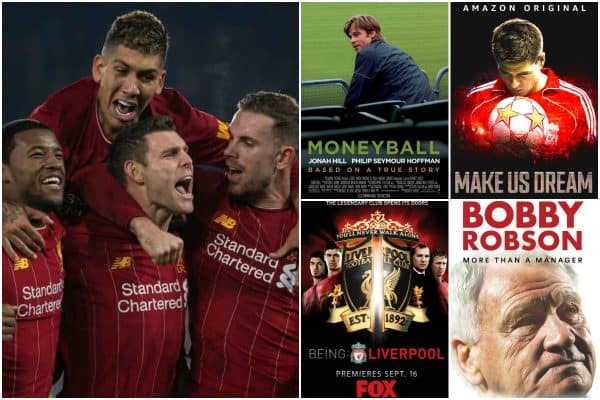 10 Liverpool and football shows to stream on Netflix & Amazon Prime

Liverpool fans are lacking a certain something in their lives right now: that regular fix of watching Jurgen Klopp‘s Reds smash rivals all over the park. Thankfully, the era of streaming means a whole load of memories are at our fingertips.

With many families and individuals restricted to quarantine or safety in staying home right now, a natural alternative for some is to watch football-related shows—and there are plenty to enjoy.

We’ve put together 10 films, documentaries or series for your enjoyment, either directly Liverpool-related or with a football focus in general.

They are split across Amazon Prime, which you can join here, or Netflix, accessible here.

We all remember this one, right? A groundbreaking, behind-the-scenes look at a football club which set the standard for many to follow suit.

Brendan Rodgers had just taken over when the Reds opened their doors and allowed the cameras in.

We saw the start of the regeneration of the club after a tough period, the emergence of youngsters such as Suso and Raheem Sterling, and a much closer look inside the modern-day Reds than had ever been allowed before.

Steven Gerrard, an iconic player and a legendary captain.

This feature lays out how he shouldered the responsibility of lifting the club when those around him perhaps lacked the desired class and made himself one of the all-time greats.

A must-watch for fans!

Nobody needs too much reminding of just how epic the 2018/19 campaign was—which doesn’t mean we don’t need to watch it back again!

The run to the Champions League final, vanquishing memories of the previous year when we lost, and the brilliant domestic run to almost land the title which arguably set the tone for this term.

It was an unforgettable campaign, topped by No. 6 in Madrid.

One Night In Istanbul

In fact, none can!

This version doesn’t focus on the pitch though, so much as the travels and fortunes of two fans who are desperate to get to the game in Turkey. Hilarious and brilliant!

The formative years of our legendary manager, how he became one of the greatest bosses of all time and his story at Liverpool.

Here, we have a great look at an overlooked aspect of his life and it’s a nice switch from looking at recent on-pitch events, too.

Less LFC-centred this time, though the club features at times.

This Is Football is an emotional look at the game around the world across a documentary series, from Delhi to Rwanda to the elite level of the sport.

Ok, so we know Moneyball isn’t precisely football-related—in fact, it centres around the rather different sport of baseball.

It’s based on a true story and the approach, which led to sporting success, was widely compared to the route intended to be taken by then-new Liverpool owners NESV (now FSG) with regards to finding recruitment value through player data.

Bobby Robson – More Than a Manager

One of the most charismatic, memorable and influential football managers from Britain of all time.

Bobby Robson’s story is brought to life in this feature film, speaking to those who knew him best and worked alongside him throughout his career.

A multi-part documentary which examines some of the finest international teams in footballing history, from back in the 1950s to the modern-day greats.

It’s not just the technical qualities which matter, but the team-building, the individuals within the group and the leadership which really shines through.

Finally, a look at the origins of street football and its influence on French football in particular.

These are all very different shows which fans might enjoy; stick one or two on and enjoy the isolation with a little more football!