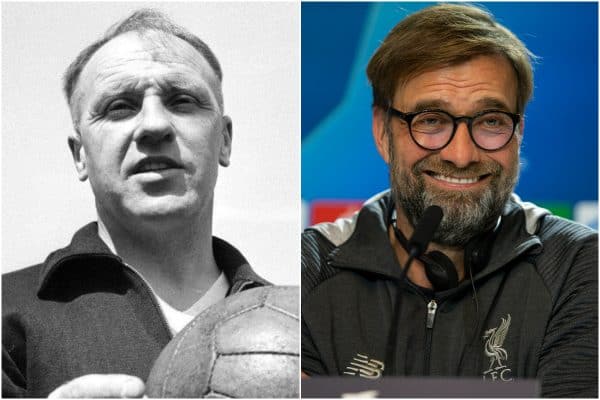 Bill Shankly’s Hungary lesson and a cautionary tale for Liverpool vs. Atleti

Liverpool find themselves in a similar situation to one under Bill Shankly almost 40 years ago, and Jurgen Klopp‘s side must avoid the same over-confident approach.

In January 1968, Liverpool braced themselves for yet another spectacular Anfield showdown in Europe.

It was a cold, blustery evening. Liverpool had experienced a heavy, wintry storm the night before and the Anfield turf was blanketed by thick, ankle-deep snow. Conditions were rugged.

But Liverpool and Bill Shankly were determined to play. The Reds had waited months for this game.

Their opponents were the Hungarian champions, Ferencvaros. Shankly and his side lost the first leg 1-0 in Budapest all the way back in November.

It had come as an unexpected defeat to a Liverpool side who were desperate to succeed in Europe; Ron Yeats declared after the game that in the second leg they would equalise “within the first 20 minutes.”

The Reds certainly had cause for optimism. They welcomed Ferencvaros in red-hot form, having beaten West Brom 4-1 three days previous thanks to a hat-trick from Roger Hunt.

Meanwhile, Ferencvaros were without their star player and the current Ballon D’or winner in Florian Albert, who was ruled out of the game with an injury.

Nonetheless the Hungarians were not the minnows they are now. They had a strong side and it promised to be a feisty encounter.

Shankly opted to drop the club’s record signing at the time, Tony Hateley, for the more experienced Geoff Strong—who scored against West Brom playing alongside Hunt.

Liverpool were confident and they had every right to be: Anfield was a shrine, the atmosphere had wilted many of Europe’s elite sides in the past.

The expectation was that Ferencvaros would be just the same as Inter Milan or Ajax.

The conditions made it difficult to play football. The snow was heavy and the ball moved idly on the field. It would stumble and fall awkwardly against the piles of snow which blotted the surface of the pitch.

Liverpool struggled with the conditions and the confidence which they had anticipated the tie quickly abated, as Ferencvaros capitalised on the Reds’ faltering form.

They withstood the initial Liverpool barrage, and with a quick clever passing move in the 19th minute Zoltan Varga slipped in the 18-year-old Laszlo Branikovits, who slotted the ball calmly into the back of the net under the arms of Tommy Lawrence.

The Anfield atmosphere which by now had become famous for You’ll Never Walk Alone and the sounds of the Merseybeat had turned silent.

The Daily Mirror had claimed after the game that after Branikovits had scored the tie had been “decided.”

With the pressure mounting, Liverpool’s players were slipping and stumbling in the snow. The Anfield crowd could not believe what they were witnessing.

Shankly and his side were outclassed and tactically beaten.

Anfield was eerily quiet in the proceeding 70 minutes despite the desperate attempts of Ian Callaghan, Ian St John and Peter Thompson to conjure up chances against a resolute Ferencvaros defence.

The defeat was a major shock. Liverpool, especially at Anfield, were regarded as invincible during that era. Ferencvaros, who were far from European royalty, humbled Shankly and the players.

When Liverpool welcome Atletico Madrid to Anfield on Wednesday night, the history lesson of Ferencvaros must bear in their minds.

Atletico are not quite ‘giants’ of European football; in many ways they are like Ferencvaros in the 1960s.

The Madrid side are a strong and competent team. They outclassed Liverpool in the first leg with an almost-perfect performance.

They will no doubt look to do the same at Anfield. The atmosphere will be electric but the Reds’ players cannot solely rely on the fans.

In 1968 against Ferencvaros, Liverpool were confident of the victory because of past Anfield European nights. After the loss at Atletico, there was the same sense of confidence with which the Liverpool players anticipated the return leg at Anfield.

Andy Robertson declared after the game: “They’re coming back to Anfield. We know our fans will be there, we’ll be there, so it’s up to them to come as well.”

That spectacular night against Barcelona in May still lingers in the memory, and you could hardly blame Robertson and his team-mates, but they cannot afford to be swept up by the past.

Atletico’s visit will be a new challenge. It is something the Reds have rarely faced in the past. The Madrid side, under the leadership of Diego Simeone, are one of the best defensive teams in Europe.

Liverpool will need to up their game. The Anfield atmosphere will not be enough.

Atletico could be the Reds’ toughest test in Europe under Jurgen Klopp.

* This is a guest article for This Is Anfield by Ben Bocsak. Follow Ben on Twitter, @benbocsak.