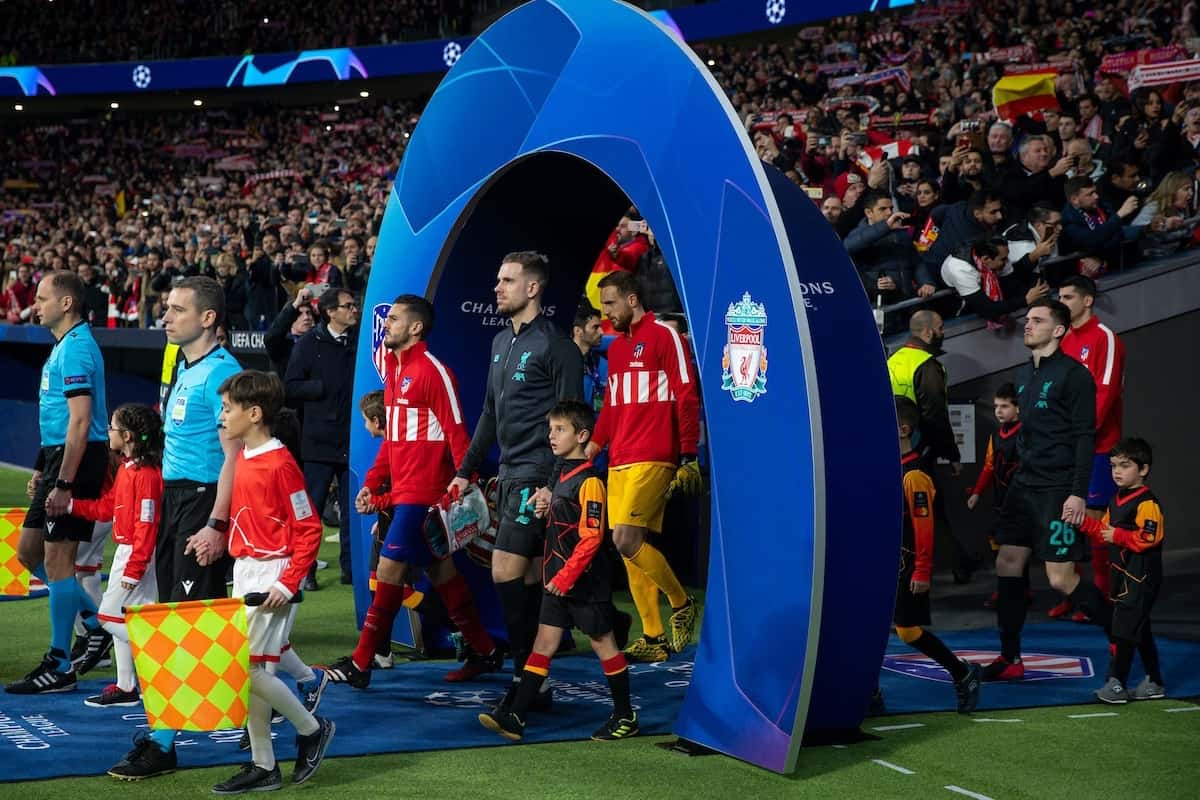 A place in the quarter-finals of the Champions League is on the line as Liverpool look to overturn a first-leg deficit to Atletico Madrid at Anfield.

It’s back to Anfield for a European night. An evening where nothing but a win will be enough to seal their passage into the last eight and the Liverpool faithful will be more than up for it.

Jurgen Klopp’s Reds have been off the boil since their 1-0 defeat in Madrid, struggling to re-discover their momentum and rhythm across all departments.

But on nights like these, form can go out of the window and if any team knows how to navigate the complexities of European ties, it is this one.

The comeback win over Bournemouth over the weekend was a needed reprieve from the external gloom looming large and now all attention is on Atletico’s visit, while the league seemingly takes care of itself after Man City’s defeat saw the points needed dwindle to just six.

And while Liverpool moves to the cusp of the Premier League title, Atletico’s hopes for finishing in the top four in La Liga and securing a place in the Champions League next season were given a setback by two successive draws.

They head to Merseyside off the back of draws against Espanyol and Sevilla and, like the Reds, have failed to keep a clean sheet since the two teams met in the first leg.

Another evening of frustrating tactics is likely to be on the cards but the Reds have climbed the mountain before and there is no reason they cannot do it again and secure their place in the quarter-finals. 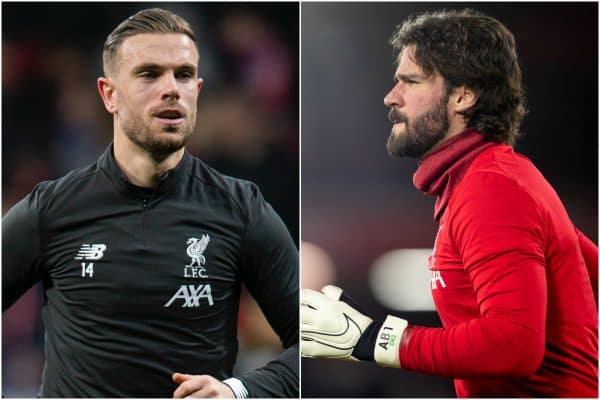 The return of Jordan Henderson after a spell in the medical room since the two teams last met was coupled with news that Alisson will not feature against Everton on Monday evening.

The Brazilian’s hip injury is one which will be “too early” for an appearance in the potential title-winning game at Goodison, with the boss clear and to the point that he “will not be ready.”

Liverpool’s No. 14, however, is “ready” to be thrown back into the mix but Klopp kept his cards close to his chance as to Henderson’s involvement in proceedings.

Other than Alisson and the continued absence of Xherdan Shaqiri the squad is in a healthy state heading into the clash, with Andy Robertson primed to return after sitting out against Bournemouth having strained his hamstring in training in the days leading up to the game.

It leaves an abundance of options for Klopp in all departments, but the back four of Robertson, Joe Gomez, Virgil van Dijk and Trent Alexander-Arnold all but picks itself, as does the front three of Mohamed Salah, Roberto Firmino and Sadio Mane.

But places in midfield are up for grabs, with the likes of Fabinho, James Milner, Gini Wijnaldum, Naby Keita and Alex Oxlade-Chamberlain all vying for a spot.

On the other hand, Kieran Trippier is in the mix for the visitors having been named in Atletico’s 24-man squad alongside both Thomas Lemar and Alvaro Morata – who were both under an injury cloud in the lead up to the game.

And Joao Felix is fit and available for the Anfield clash having missed the first leg through injury.

Last 5 to Atletico Madrid (All Competitions)

From the 14 European ties Liverpool have found themselves with a first leg 1-0 deficit away from home, they have progressed nine times.

The most recent example was against another Spanish outfit in Villarreal in the 2015/16 Europa League semi-finals, where a 3-0 win in favour of the Reds followed at Anfield to secure a place in the final.

The power of Anfield is one not to be underestimated and Atletico will need to be at their best as in European competition the Reds are unbeaten in their last 25 games – a run which dates back to October 2014.

Atletico will be expected to dig their heels in but they are yet to win a game on the road since the turn of the year and have one just one of their last 13 aways games in all competitions.

While the visitors would be more than happy to settle for a draw, Liverpool, of course, need a win to progress and recent history suggests they can do just that.

Speaking in his pre-match press conference, Klopp was eager to reiterate that it is only “half-time” in the tie whilst also recognising the need to be unpredictable to unlock Atletico’s defensive wall:

“[Atletico are a] very experienced team, played in these competitions for a long time and they know how to deal with different situations, that’s all clear.

“But I don’t think a lot of them played in a stadium like Anfield before, in an atmosphere like we can create.

“That’s something we want to use, and hopefully we can.

“We need higher speed in different moments, we need better switches, need braver football, to play around, in-behind and through the gaps of the formation.

“If you play predictable Atletico defends you for the next six months without rest.”

Liverpool’s must-win meeting with Atletico will be shown live in the UK on BT Sport 2 and BT Sport Ultimate, with coverage starting at 7pm (GMT) ahead of the 8pm kickoff.

Ben Twelves will be keeping you entertained with the usual biased coverage of all the action on This Is Anfield’s matchday liveblog, starting from 7.15pm (GMT).