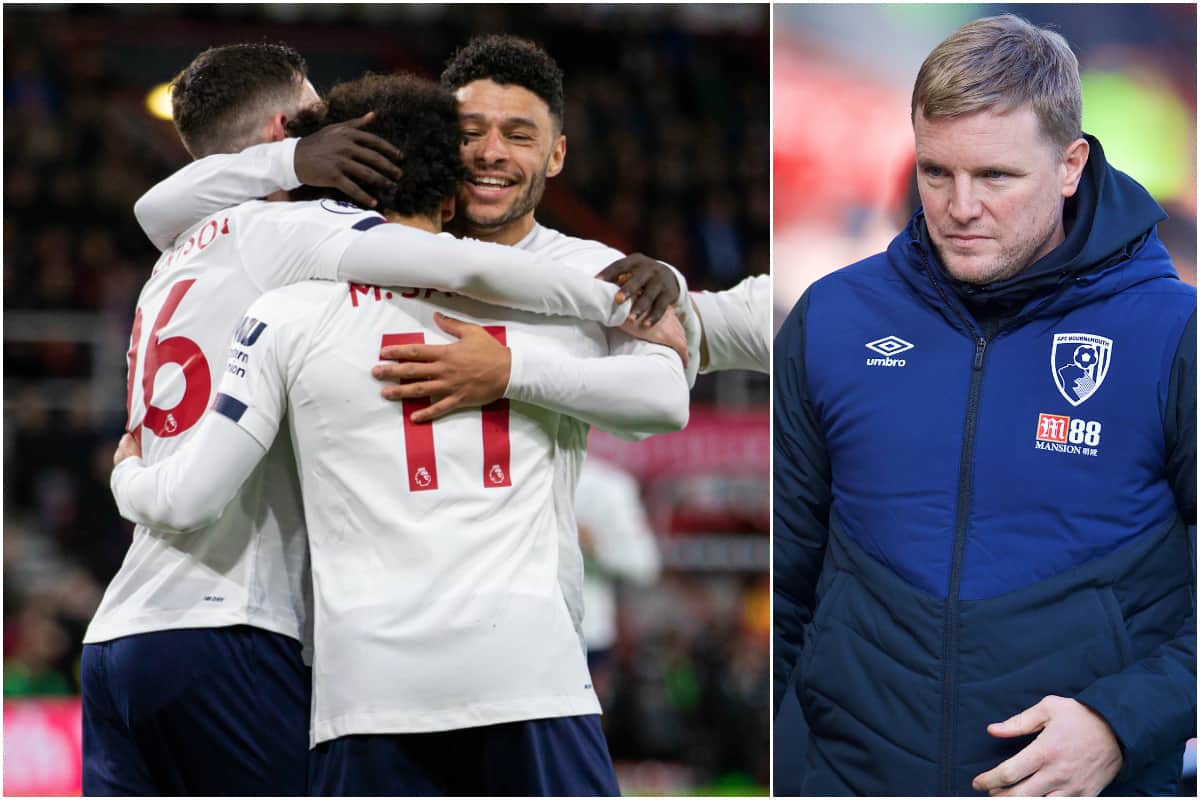 With Liverpool preparing to host Bournemouth this weekend, we get the view from the Cherries, as they look to complete a miserable week for the Reds.

Having won relentlessly throughout the season, Liverpool have a suffered mini-slump after the winter break.

Back-to-back defeats away to Watford and Chelsea have killed momentum for Jurgen Klopp‘s side, robbing them of going unbeaten and winning the treble in the process.

On Saturday, the Reds have an ideal opportunity to respond, welcoming a relegation-battling Bournemouth side to Anfield.

Ahead of the game, we spoke to Peter Bell (@CherryChimes) from Cherry Chimes to get his thoughts on both sides’ season and how Saturday’s match could play out.

Bournemouth are 18th in the Premier League – what has gone wrong?

Rather a lot has gone wrong, to be honest. The injuries have been long-term ones and they have kept key players out for important games.

Charlie Daniels won’t be back this season and it could be touch-and-go whether Arnaut Danjuma and Chris Mepham make it back, while we are still waiting for David Brooks to return after two operations this season.

But other players have missed several games, such as Callum Wilson, Josh King and Nathan Ake—the list goes on.

I think it was a mistake to sell Lys Mousset to Sheffield United, too, as it left us with just three recognised strikers. Dominic Solanke hasn’t exactly hit any form.

Add to this the team’s inability to score more than a goal a game, coupled with a porous defence, and you can quickly see why Bournemouth are at the wrong end of the table.

Do you think the Cherries will beat the drop?

When we lost to Watford and Norwich in January, I didn’t see the team have the fight to beat the drop.

Now we have players coming back but we have to play the top sides in the Premier League, so it isn’t going to be easy.

I did feel like the confidence returned against Chelsea in our last match and at home we seem back to our best.

It is away from home where the worry is—we haven’t picked up a point away in 2020 and that’s not good enough.

There might be three worse teams, but it’s hard to see Bournemouth not being involved in the drama on the last day of the season.

Which player has stood out most this season? 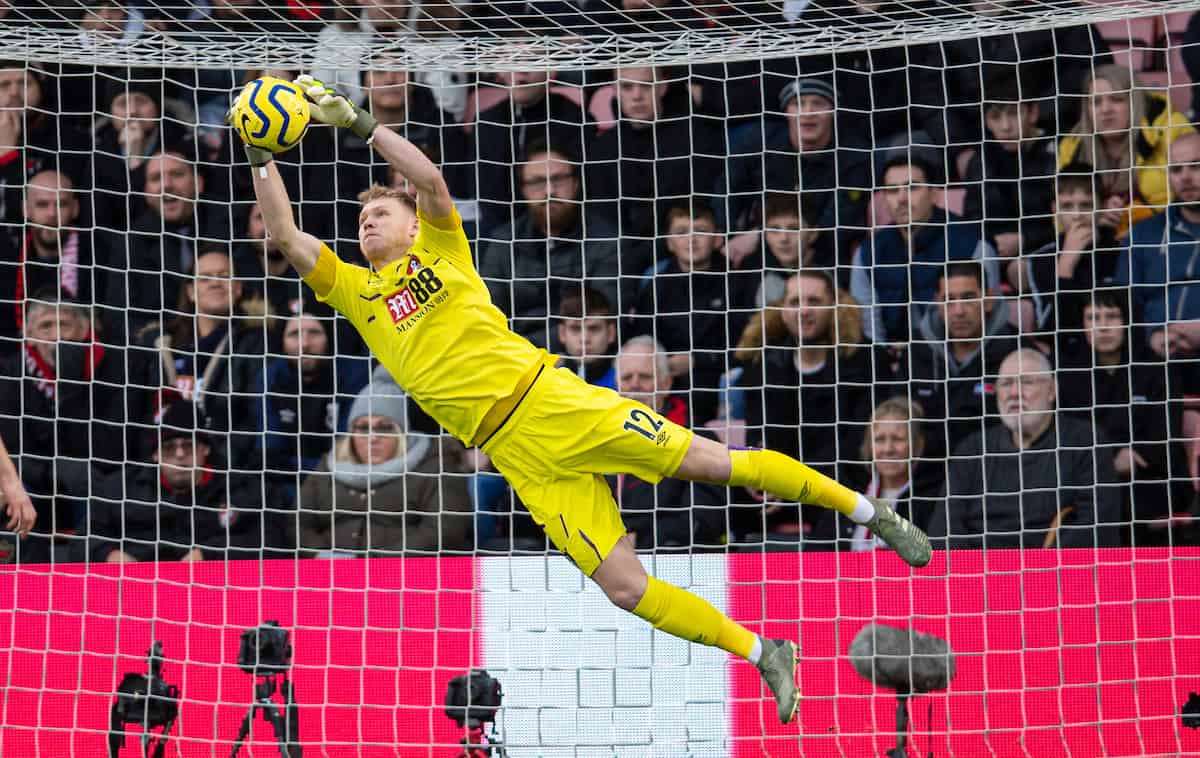 Aaron Ramsdale in goal is the main standout; he has been outstanding. He has such a great connection with the fans and it has been a real pleasure to see him play so well.

He has been keeping the team in games and he enjoys his football so much. I can’t see anyone else picking up any of the awards at the end of the season—Ramsdale deserves them all.

He has been involved in relegation battles for the last three seasons at Chesterfield and AFC Wimbledon, where he was on loan, and now at Bournemouth.

Ramsdale kept his previous teams up and we hope he is a good omen to keep the Cherries in the Premier League, too.

How has Harry Wilson fared on loan?

He’s has been one of the players that has performed well. He is a superb free-kick specialist and he has no fear in taking on a shot anywhere in and around the box.

He will be a great addition to Liverpool’s squad if Klopp chooses to include him next season.

Wilson may have a bit to learn in his defensive duties, but he is fully committed to Bournemouth at the moment and we couldn’t have expected anything better than what he has provided, scoring seven goals.

Who do you fear most for Liverpool on Saturday?

Playing at Anfield is the worst problem. I hope your crowd has an off-day and lose their voices for a bit. The Anfield roar gives you a one-goal head-start.

After that you can almost take your pick as to who is going to score against us. Last time it was the ex-Southampton player Alex Oxlade-Chamberlain—it is always a worrying prospect when a former Saint is on the pitch.

The player who I think has been best for you though is Sadio Mane—perhaps he can be rested ahead of Atletico Madrid!

Actually, please have a word with Klopp and tell him to play your under-21 side.

I know they would still be good enough to give us a very good game, and might even be favourites to win, so why risk playing your best players with such an important European night to come…?

It will probably be a fight between Ramsdale’s gloves and a lot of shots from those in red shirts.

Seriously though, our centre-backs have to stand up and watch the movement and runs of your front players, while our full-backs have to try and stop crosses from Trent Alexander-Arnold and Andy Robertson.

Jack Stacey is excellent down the right-hand side, so if he can make Robertson think about having to defend a little more than normal then we will be in the game.

If we can then stay in the match and frustrate Liverpool, you never know what could happen. Bournemouth are currently the top team at scoring from set-pieces.

If we are to win, we need Ryan Fraser, Joshua King and Callum Wilson to all have their shooting boots on and Ramsdale to show why he will soon be England’s No. 1.

The head says it should be a comfortable 3-0 or 4-0 win for Liverpool, but football doesn’t always go as expected so I am happy to stick my neck out.

The Reds will totally dominate and have at least 75 percent of the possession, and yet find themselves tripped up by a single goal from a corner, headed in by Philip Billing—who never scores but this time uses his face, back or knee to good effect to give us the lead.

Liverpool will then hit the post, the bar and see Ramsdale pummelled with shots, perhaps even having the odd goal or two ruled out by VAR.

Bournemouth could then feel like the league has given them some luck back for the horrors that we have seen in the last few months, letting us have a totally undeserved but gratefully received 1-0 away win.

Now that would be a good away day for our fans.

To finish up, I would like to say all the best on lifting the title and getting a record points tally—after the defeat to Bournemouth!