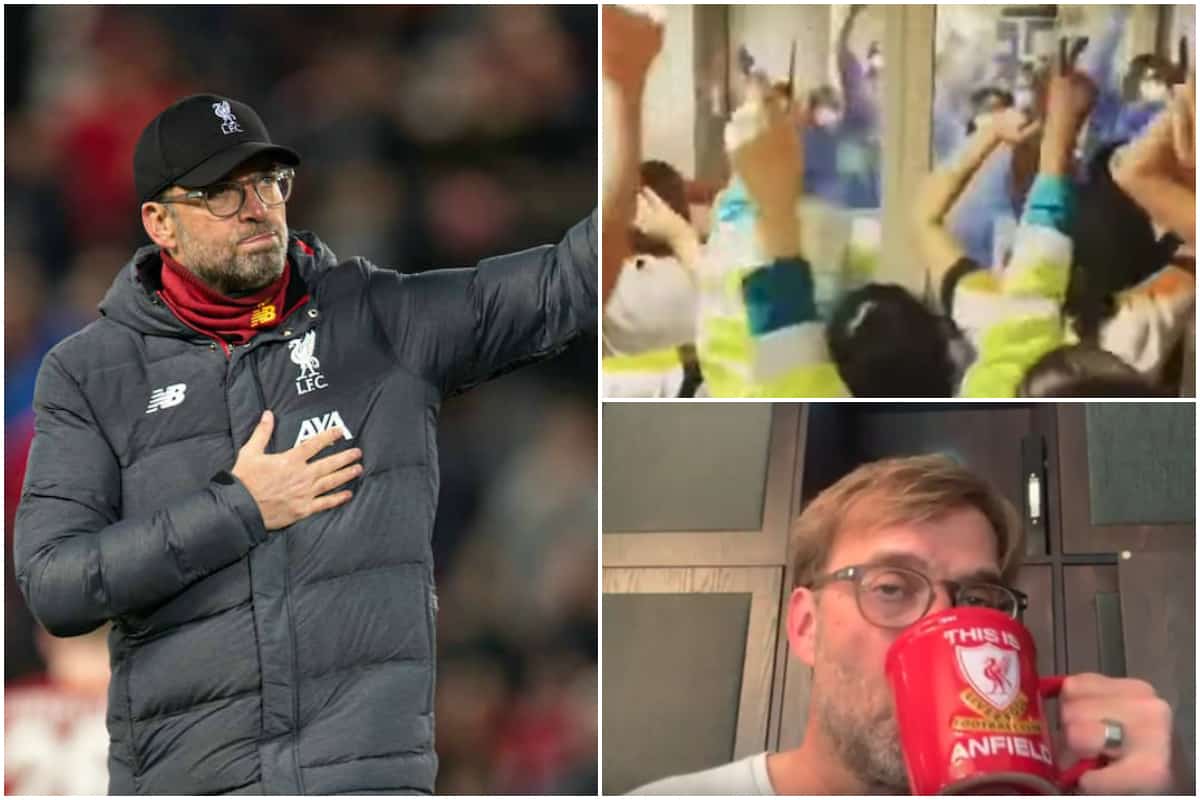 Jurgen Klopp has once more hailed the work done by the health workers as the nation battles the coronavirus pandemic and says he was moved to tears by hospital staff singing You’ll Never Walk Alone.

The Liverpool boss was speaking to the club website in an interview from home, relaying how the situation had impacted the club and what the current process was, as well as the manager speaking in more personal terms.

One of Klopp’s great traits is his humility and support for the humanitarian element, be it in keeping his players’ morale up or in championing the efforts of those who have nothing to do with Liverpool FC whatsoever, but who are playing a vital role in society.

Over the last few weeks that has seen health workers and NHS staff take centre stage, as the country – and the world – call on them to save lives, heal those who have fallen sick and try to stabilise populations whose entire way of life has largely been removed of late.

Recently, a video emerged with hospital workers singing along to the Reds’ anthem, You’ll Never Walk Alone, a song which resonates for so many for its uplifting message and tone of hope.

Klopp says he saw the impact the song had and was emotionally overcome.

“A lot of people are out there working still, the health services – it’s incredible these people are doing their jobs to make sure that we can stay at home.

“My English is not good enough to say [how much I admire the job they are doing]. It’s extraordinary, it’s great. I think yesterday I was sent a video of people in the hospital just outside the intensive care area and when they started singing You’ll Never Walk Alone I started crying immediately.

“It’s unbelievable. But it shows everything, these people not only work but they have such a good spirit.

“They are used to helping other people, we need to get used to it because usually we have our own problems and stuff. But it’s their job, they do it day in and day out. They bring themselves, if you want, in danger because they help ill, sick and seriously handicapped people, so I couldn’t admire them more and appreciate it more, I really couldn’t.”

In similar social circles of help on behalf of others, Klopp praised the LFC Foundation and other charitable efforts for doing what they could to support Foodbanks, neighbourhoods in need and more.

Everyone has a part to play, as the boss says. For some that’s on the front lines, for others it’s about staying home and stopping the spread. ‘Together’ is the message though, to help everyone out the other side.