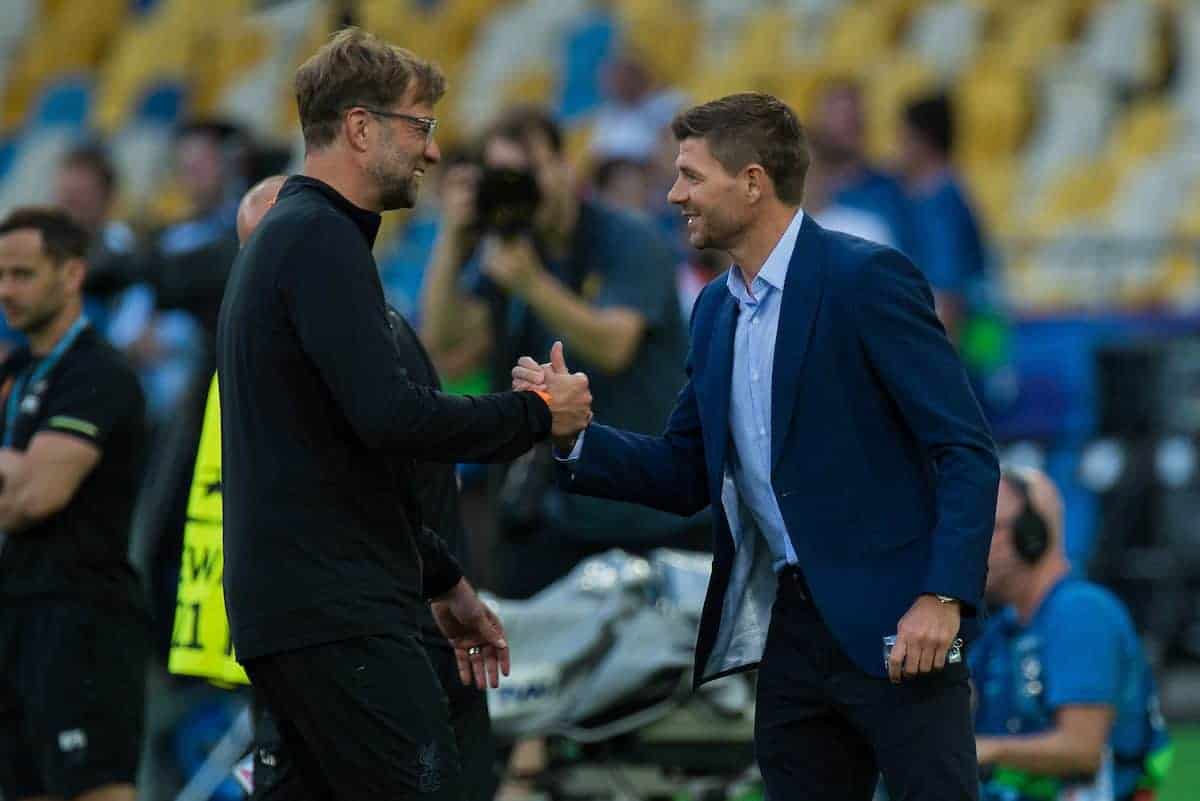 Steven Gerrard has revealed the first bit of managerial advice given to him by Jurgen Klopp – advice which he says was crucial.

The Liverpool legend embarked on his managerial career with the Reds’ youth teams, before taking the step up to senior football with Rangers in the Scottish Premiership last season.

While still on a learning curve about top-level management, Gerrard has taken Rangers to second place again so far in 2019/20, with plenty of ups and downs in a campaign which has seen his team initially challenge for the title, go on a good run in Europe and then fall off the pace domestically.

Gerrard has been heralded by some as a potential future Reds boss, but he has some way to go in his dugout adventure before that can realistically be considered a possibility.

The great thing for Gerrard is that his standing in the game as a player enabled him to be in a position to learn from the best around—with Klopp being one of those who had time for our former captain, helping him with a few pointers about the transition.

Interestingly, the piece of advice Gerrard says has played the biggest part was regarding the very thing which put him in place to get a high-profile job right from the start: forget who you were as a player.

“I had a real honest and open conversation with Jurgen Klopp for a couple of hours,” Gerrard told UEFA.

“And the advice he gave me was: ‘Don’t go into this as Steven Gerrard with the name on your back.

“Go back to the beginning and strip it back like a car.

“Get your pitch confidence and get used to tactics and different formations. Try things, make mistakes and get it horribly, wildly wrong.

“Because I’ve seen tons of footballers with their names on their backs go in there and it doesn’t work.’

“That was the best bit of advice. I don’t think I will ever get a better piece of advice than that. Strip it right back and go back to the beginning.”

Gerrard continued to acknowledge he had made plenty of mistakes already, but that the key was to keep learning from them.

As for Klopp, he has always had a remarkably close relationship with many of his players throughout his managerial career.

Though Gerrard never actually played under the boss, he would have had plenty of contact as a club icon and, later, a youth coach—and his progression to first-team level coaching has been replicated since then with Neil Critchley, too, who recently joined Blackpool.

If Klopp, one of the most successful bosses in the game right now, is freely giving out advice on being a manager, it’s well worth listening to—as most other coaches are simply aspiring to be where he already is.