Robbie Fowler has selected his Liverpool Player of the Year, with “consistency along with vital goals” forming the basis of his decision.

Gone are the days when Liverpool’s Player of the Year was a foregone conclusion, instead many could make a case for a handful of Reds to take the crown.

Jurgen Klopp’s side have broken records at every turn in 2019/20 as they forged ahead to establish a staggering 25 point lead over their closest rivals in the Premier League before the coronavirus saw football suspended.

The ebbs and flows of the campaign have seen Jordan Henderson rise to the fore with arguably his best performances of his career, as well as Trent Alexander-Arnold, who has equalled the record for assists from a defender in the English topflight (12) which he set last season, and the ever-present Mohamed Salah.

And Robbie Fowler, who currently manages Australia’s Brisbane Roar, has weighed in on the discussion after The Athletic‘s James Pearce opened up the debate.

“Lots to choose from but Mane for me, consistency along with vital goals,” Liverpool’s former No. 9 said on Twitter.

In 26 Premier League outings Mane has scored 14 times and has set up a further nine, a tally which is increased by four and three respectively across all competitions. 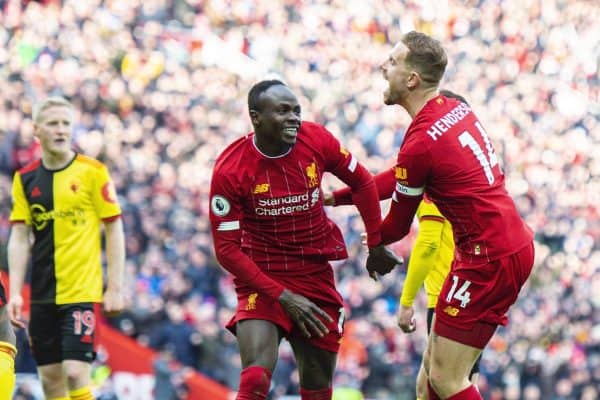 The 28-year-old is behind only Salah in the goalscoring charts, by two, and has supplied the joint second-most assists alongside Roberto Firmino and behind only Trent.

His decisive goals, however, are ones which stand out for Fowler and others, with Southampton, Aston Villa, Wolves, Norwich and West Ham just a handful of games to have seen Mane positively impact the scoreboard in favour of the Reds.

But that is just one argument out of countless ones you could make for this Liverpool side who time and time again leave you in awe.