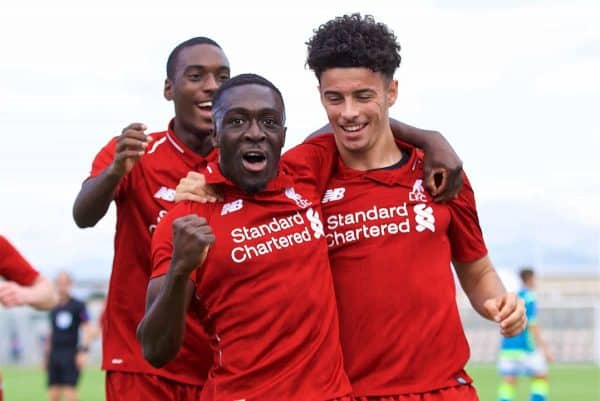 Adekanye, 21, was on Liverpool’s books for four years before making the switch to Lazio last summer.

The winger joined the Reds from Barcelona in 2015 as a 16-year-old, it was his fourth club after having also played for Ajax and PSV Eindhoven on loan.

A strange and turbulent career trajectory for any young player looking to make a breakthrough into the first-team environment.

Adekanye had been forced to leave Barcelona after FIFA ruled the Spanish outfit had broken rules on signing underage players.

And his time at Liverpool first required a waiting period to be granted a work permit before facing an injury setback, a settling in period which the young winger has since described as his “worst moment.”

From homesickness and adjusting to a new club and country, young players are faced with a multitude of challenges to overcome which extend beyond the football field.

And the 21-year-old has opened up on his time at Liverpool and shared some advice for young professionals who are in the same position he once was.

“At Liverpool, I had the worst moment. At first, I had to wait for documents, then I got hurt,” he explained over Instagram.

“I thought that I would not continue playing football, that I wanted to go back to Holland.

“I didn’t want to go to training, not even to wake up. I closed myself in the house and started to cry.

“My agent cheered me up, told me that everything would be fine. Without him and the support of my parents, I would probably have gone.

“This is why I tell young people to have fun, to do everything with joy because otherwise, things get complicated.

“Have an idol and look at how it got there. Do not imitate him, because we are all different, but see what this person did to get where he went.”

Adekanye had become an ever-present in what was then Neil Critchley‘s U23s side but struggled for consistency and was rarely involved in first-team training with Klopp and Co.

In his debut season at Lazio so far, which is also home to Lucas Leiva, Adekanye has made a total of seven appearances across all competitions with a return of one goal, having primarily found himself as an unused substitute before the coronavirus saw Serie A suspended.

There are hopes in Italy that fixtures could resume at the end of May or start of June, with team training to commence on May 18 as the country moves into the next phase of their battle against the pandemic.