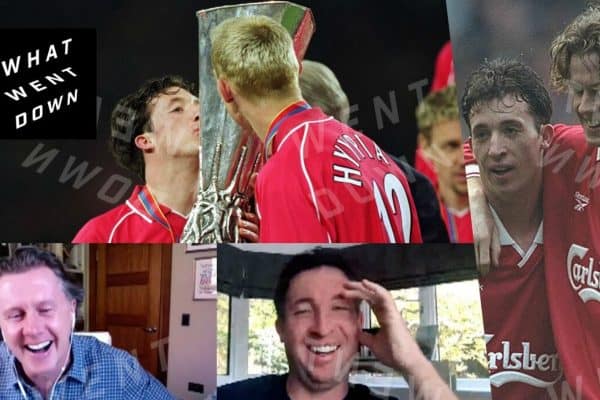 Robbie Fowler and Steve McManaman spent nine years as teammates at Liverpool and they would go on to forge different careers elsewhere and the recount of their experiences is insightful.

The duo were the fresh-faced stars of Liverpool during the 1990s, both making their debut at 18 years old in 1993 and 1990 respectively.

The pair played 264 times in the same team before McManaman departed for Real Madrid in the summer of 1999 and while Fowler would go on to cement himself in Anfield folklore and nicknamed ‘God’, McManaman would become an underrated figure at the club.

McManaman left Liverpool with two honours to his name, the 1992 FA Cup and the 1995 League Cup, the latter of which he shared with Fowler who went on to win a further four trophies with Liverpool after the turn of the millennium.

The pair got together on BT Sport to chat about their playing careers and here are five things we learned.

In 1994, Liverpool’s then No. 23 scored what was then the fastest hat-trick in Premier League history at just 19 years of age.

He needed just four minutes and 33 seconds to tear apart Arsenal who were considered one of English football’s most revered defences.

But in 2015, Sadio Mane, then at Southampton, eclipsed his time by scoring three against Aston Villa in two minutes and 56 seconds.

“I’m proud of the fact that that it was a Premier League record for 20 years,” said Fowler.

“But I think it still should be a Premier League record because mine was against a great Arsenal team.

The one game Fowler would like to change in his career

“I personally can’t remember hardly anything about the game,” McManaman says – much like the rest of us.

Man United won 1-0 at Wembley, with Eric Cantona scoring in the 85th minute and it was an outing which failed to burst into life at any stage.

“If I could go back and change anything in my life it would be this game,” says Fowler.

Fowler was on the brink of tears as McManaman announced departure

With the pair being really close both on and off the field, Fowler recalled his wave of emotions when McManaman informed him he was set to leave Anfield after nine years.

“I remember when you told me you were leaving, we were out for a quiet drink, I remember being gutted,” Fowler explained.

“Obviously I was made up in a way because I knew you were going to a great team and I wanted you to be successful.

“I was gutted, not only for the simple fact that you were a mate but also the fact that we were losing a great player and I understood the reasons why, but I remember it ever so much, I think I almost cried.”

The caterpillar celebration of ’01

In 2001, Liverpool won a cup treble with a dramatic win over Alaves in the UEFA Cup final and Fowler, who scored Liverpool’s fourth goal, celebrated post-match by doing ‘the caterpillar’ – otherwise known as ‘the worm’.

A decision he lamented and was clearly bemused by 19 years later.

“Me doing the caterpillar, what am I doing? It’s probably a reason I never played actually!

“It was a real surreal week,” said Fowler about winning the FA Cup on Saturday, the UEFA Cup on Wednesday, then securing Champions League qualification on the Sunday. “It’s probably one of my best weeks of football.”

Liverpool accepted a bid from Aston Villa for Fowler

Fowler left Liverpool in 2001, switching Anfield for Elland Road – but the Whites had not been the first team to enter the fray.

“It became evident that I wasn’t going to play as many games as I would’ve liked. As much as it was my decision to leave, I did feel forced out,” Fowler explained.

“I knew people at the club were trying to sell me. They accepted a bid from Aston Villa, Chelsea tried to buy me. I wasn’t interested.

“But all of a sudden Leeds came in with a good offer and I knew at the time Leeds were a top club.”

He would, of course, return to the club in 2006 before departing for the final time a year later, finishing his Liverpool career with 369 games and 183 goals.