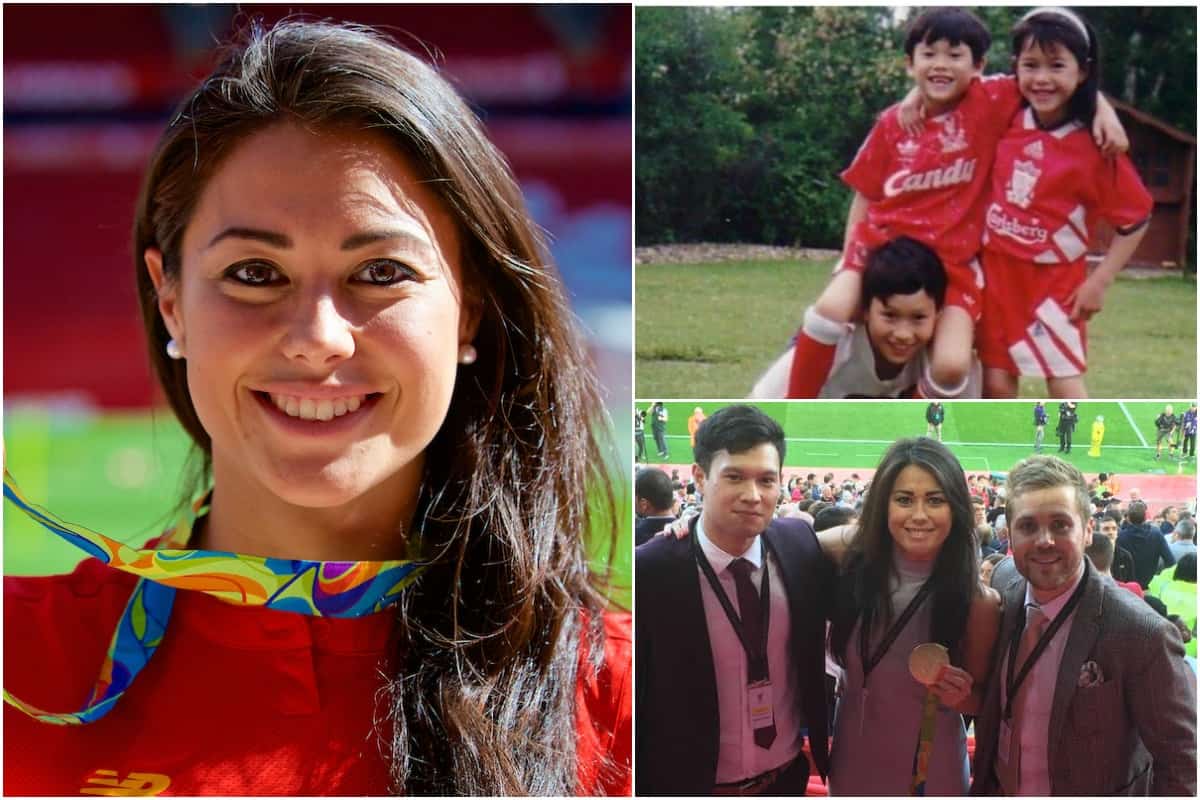 In the latest edition of ‘My Liverpool Life’, Olympian Sam Quek shares tales and stories of her life as a Red.

Because I have a twin brother and an older brother, it was always after school playing football. It was a case of either join in or get bored and because I’m highly competitive that’s how it really started for me. I always insisted on wearing football boots! 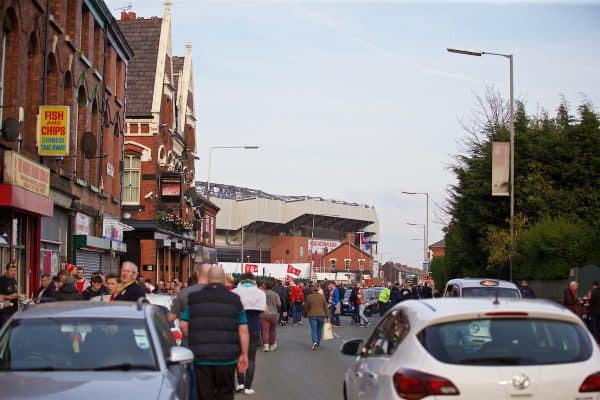 Liverpool 3-1 Wimbledon, December 1999: We got tickets right at the back of the Kop. I remember people were using the metal wall at the back to bang on it.

I’d spent so much time planning what I was going to wear; track bottoms, hoody but with Liverpool top over the top. I remember walking towards Anfield, and I still do this now, stopping at the chippy, normally it’s chips and gravy or sometimes it’s chips and curry sauce, always laced in vinegar! 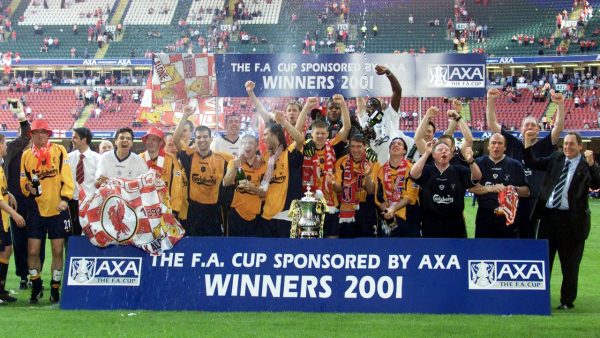 Tough question. I know it sounds cliche and boring, but this season and last season were just incredible. Some of the best games I’ve seen Liverpool play are these two seasons.

But one of my best seasons was the ‘treble’ of 2001. I managed to get to a lot of games then, I went to the FA Cup final and Worthington Cup final in Cardiff. I remember it being such an important season for me as a Liverpool fan.

That was my first experience of winning more than one cup in a season. 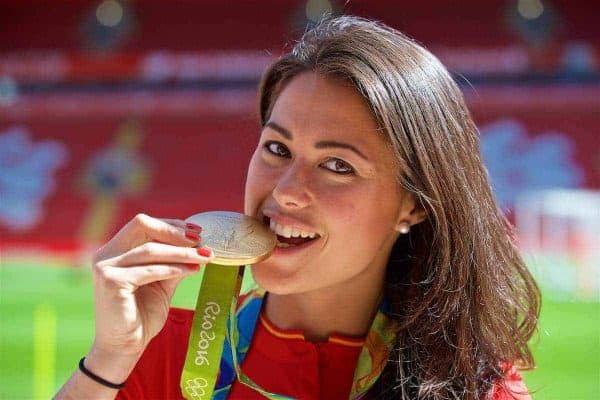 Liverpool tickets have always been hard to come by.

Growing up we were family friends with Ian Rush: me and my two brothers played in the same team as his son and we were really good friends. Then my dad would call up or phone up for tickets back in the day before internet sales.

Now I think it’s impossible to get tickets, because we’re more successful! So it’s whenever I get the opportunity to get tickets. Maybe if my cousin’s friend can’t make it, she’ll invite me, or a few hockey coaches I know who sometimes have a spare.

The first thing I thought when I won my gold medal (in the 2016 Olympics), my husband went “you’ll be able to go on at half-time at Anfield,” so when Liverpool opened the new Main Stand I was invited after winning the gold medal that summer.

But on that day there were some teething problems with the water and it stopped in the female bathrooms and they were all clogged. So as I’m going down the escalator on the way out there were loads of people there waiting and I shouted up to the fella, “thanks very much for having us – and good luck to your plumber!”

It didn’t seem that funny at the time but the next day it came out in the Echo about the toilets being blocked and my husband was like, “can you imagine them hundreds of people who heard you shout that thinking it was you who caused that!”

And the other story is Liverpool-Barcelona, we’d booked to go to Barbados. When we got there we were rushing to watch the game in our hotel room. It kicks off, the goals, I’m getting louder and louder, jumping on the bed, screaming. Our hotel room is right by the beach, we have the doors open, there’s loads of people on the beach… it wasn’t until after that I realised people would’ve thought something else was going on; I’m screaming, jumping off the walls!

When we went to dinner that night, people were clocking onto us. My husband was like “yeah I’m the man!” 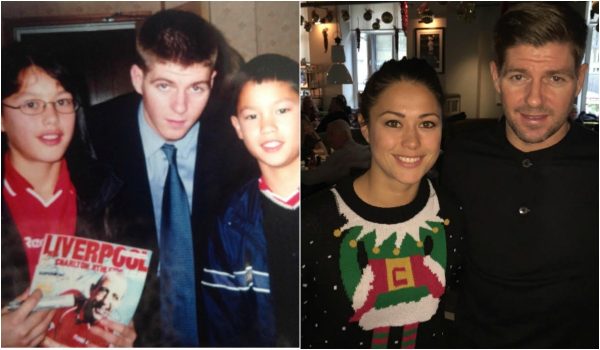 I’ve got a photo with Stevie Gerrard when I was about 14… a stage in my life when I had a terrible fringe, terrible glasses…

That’s the only time I’d ever met him until Christmas 2016, I’d just come out of the jungle (I’m a Celebrity) and I was going to a meeting with LFCTV and we were doing a Christmas special so I’ve got this Christmas jumper on with the body of an elf.

Stevie’s like “hiya Sam” and he knows me as his kids have been watching the jungle.

So yeah, the only two times I’ve met Steven Gerrard was one when I looked like a little lad and two when I was dressed up like an elf! So I’m buzzing to meet him, but mortified I’m dressed like a bloody elf!

If you could have three people from the current Liverpool squad to be in the jungle with you on I’m A Celebrity, who would you choose and why… 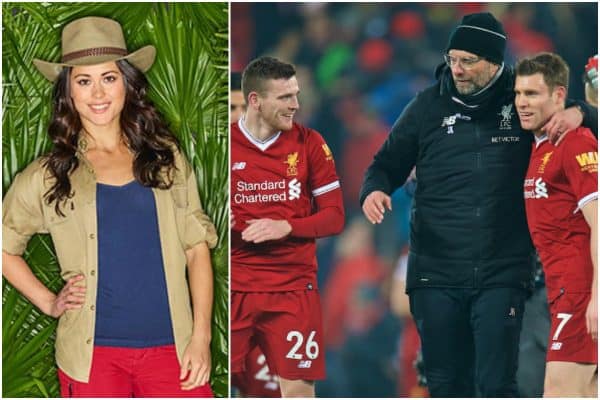 I’d go with James Milner: he’d be the key who would be a machine, he’d cook, clean, light the fire. He’d be like Tom Hanks in Castaway! He’s a machine, he’s good at everything.

You’ve got to have Jurgen: he’d be good entertainment, some belting stories.

And then, Andy Robertson: he seems sound. He’d probably have to stay in the shade though! I think him and Milner together would be comedy value to watch together.

Is it true you’ve been offered a trial with the Liverpool Women’s team?

I got asked to go to one, yeah! I used to play football for Tranmere before I played hockey, so used to play at the school of excellence with the likes of Jodie Taylor, at the age of 16 I had to choose competitively (football or hockey).

Then on the back of the Olympics, I was joking around and said I’d love to play for Liverpool, so Vicky Jepson said why don’t you come along, but I’m still to take her up on that.

Man City also said why don’t you come along, but I never had time really. Maybe if I’d have been five years younger I’d have gone for it more after the Rio gold medal.

But now I wouldn’t want to insult the team. I’d love to do some sort of documentary, showing what female footballers do now, have a little kick around, get the inside look at how the female game compares to the mens’.

* Thanks to Sam for sharing her ‘Liverpool Life’ – look out for more from this series on This Is Anfield. Follow Sam on Twitter @SamanthaQuek.