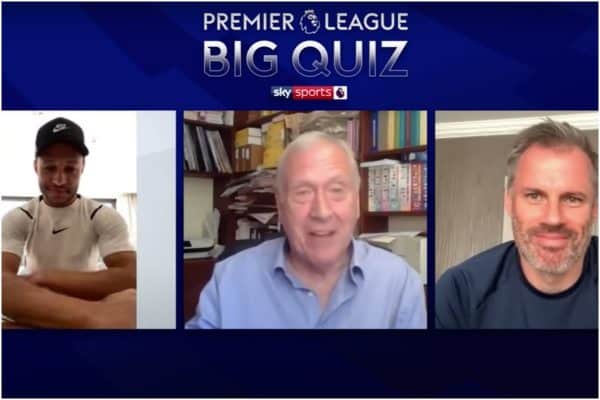 With football analysis on hold as live action takes a backseat, it was Liverpool’s current No. 15 vs. Liverpool’s former No. 23 in a battle of trivia.

The stakes were high as Alex Oxlade-Chamberlain and Jamie Carragher contested a Premier League quiz led by Martin Tyler, with the loser set to lose their beard.

There were to be no questions of the game gone by or the talk of the Premier League title which Ox, as his teammates would, swat away with a “we’re taking this one game at a time” statement.

Instead, it was three rounds of trivia which included questions based on Ox’s time at Arsenal and present-day at Liverpool, while Carragher was similarly given a mix of both in the period during his playing career.

And after a tightly contested first-round, Carragher upped the ante: “Should we say whoever loses has to shave their beard off?”

As you would expect, it was met by an “oh my God” from his opponent who needed clarification that the whole lot had to go, as he mentioned, “the Mrs has just picked her head up in disgust!”

Some stubble or a beard has been an ever-present feature of Ox’s since he arrived at Anfield, while isolation has seen Carragher ditch the clean-shaven look so it was seemingly an almost win-win situation for the former Red.

There will be no spoiling of who needs to find their razor, but the man in question confirmed they would supply proof once the deed was done.

The trivia itself provides a wide scope to test yourself on Liverpool and Arsenal, both past and present, with names of substitutes, specific shorelines and red cards all in the mix and is certainly worth a go as everyone continues to navigate life without life football.