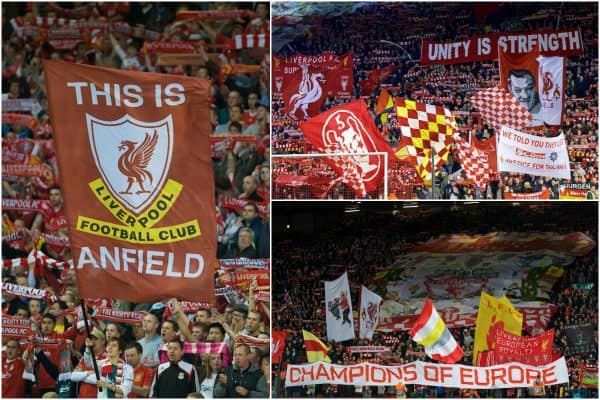 25 of our favourite photos of the Kop

The Kop is as enchanting as it is iconic for Liverpool Football Club and there has been an abundance of moments captured through the camera lens for our viewing pleasure.

The Kop; since 1906 the stand has been a place where those with the shared passion for Liverpool Football Club have congregated together in support of the Reds.

From a swaying red sea singing in perfect unison to instilling fear into the opposition with one simple glance.

It has been there for the highest of highs and the lowest of lows, acting as a place for tributes and protests – a single entity united by the Reds.

And here, in no particular order of preference, we have picked our 25 favourites of The Kop from the years gone by.

From the Bill Shankly era of a sea of Reds on the standing Kop, to the last day it was in place before Anfield became an all-seater stadium.

To a sea of tributes, protests and honouring players and managers of past and present.

It truly is a place to behold each and every matchday.

It is a place for expression and escapism where memories to last a lifetime are made.

There is no place like it in world football.

Since 1906 the Kop has witnessed countless famous nights and has welcomed triumphant European Cup-winning and League title-winning sides over the years in style.

And hopefully, it will not be long until we see the Kop in all its glory once more.

Let us know your favourite picture of the Kop or memory over the years in the comments below.