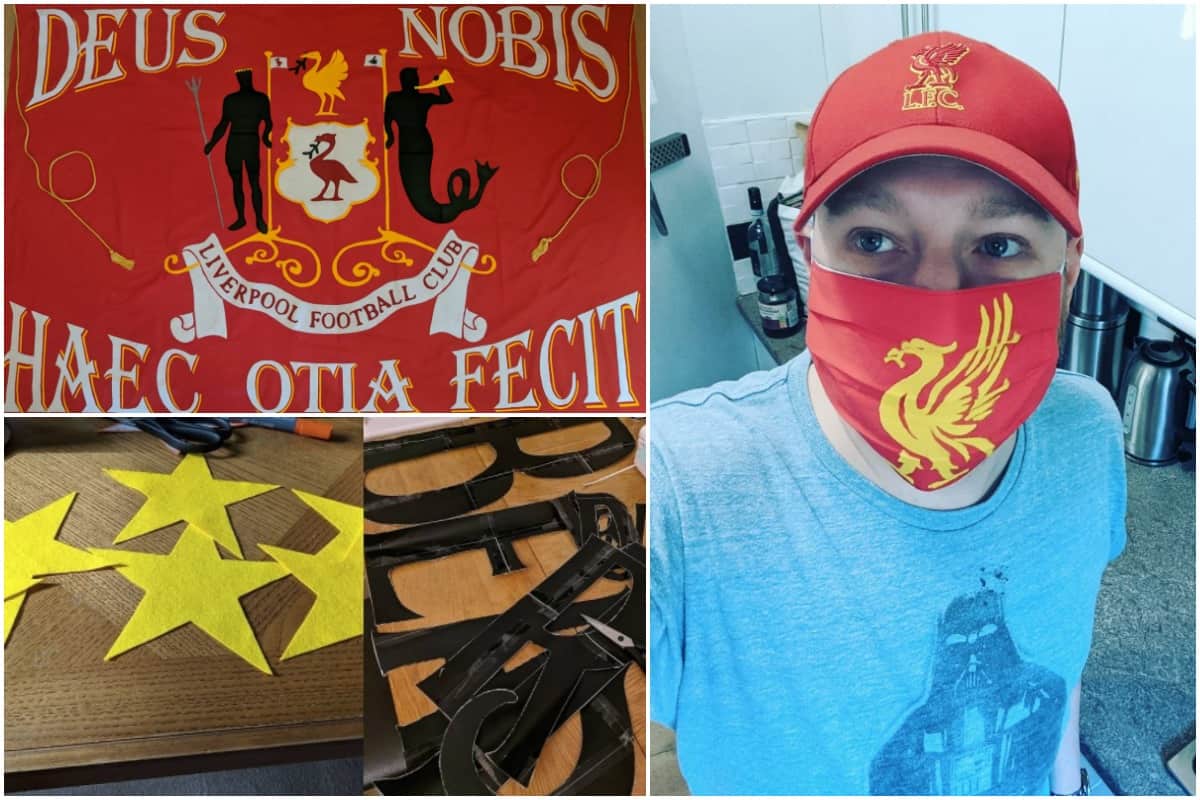 Liverpool fans are well known for expressing their devotion to the club through a particular art form, and for Mark Sweatman and his startup ‘Handmade LFC Banners’, it is a “labour of love.”

From a nod to our illustrious history to the comical, the political and an ode to players past and present, Reds have always known how to express themselves through banners.

Some of which have required a touch up after Jurgen Klopp’s triumphant side brought No. 6 back to Anfield, and a looming 19th league title will no doubt be commemorated in all its glory.

On the Kop and to trips to Europe, you will know when the Reds are in town and for Mark Sweatman, what was once a hobby is now a budding side business.

From creating his first banner in 2005 to now making commission pieces, Mark can dedicate up to “ten hours” to produce a design alongside his regular full-time job as a teacher.

The intricate level of detail for each and every piece is a sight to behold and This Is Anfield spoke to Mark (@handmadelfcbanners) to learn more about his story and his incredible work. 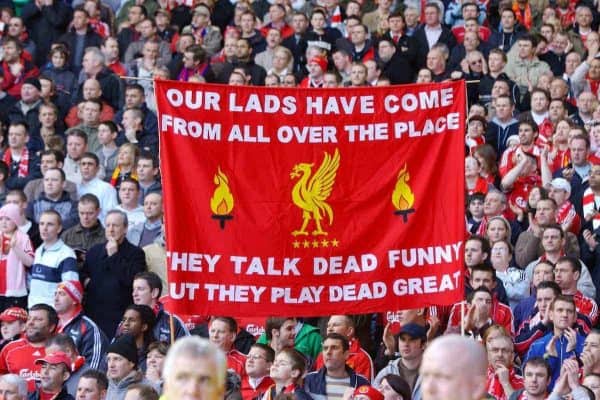 From growing up in Birkenhead in the 1980s and watching the greats ply their trade to 2005 when the first seeds were sown for what first be a passionate hobby, supporting Liverpool has been central to it all.

“The first banner I made was back in 2005, and took inspiration from the lyrics to the Anfield Rap – ‘Our lads have come from all over the place, They talk dead funny but they play dead great’,” Mark told This Is Anfield.

“I chose this quote because it reminded me of that Golden Age of my childhood when Liverpool were winning everything, but also because I liked the inclusive message – Liverpool fans don’t care where their heroes were born.

“It makes me think of another famous lyric, from Ferry ‘Cross The Mersey – ‘We don’t care what your name is, boy, We’ll never turn you away’. It’s what our club and our city are all about -its what sets us apart – and it is more relevant today than ever, with racial intolerance on the rise nationally.

“I made my second banner in 2007, but it was only in 2019 that I got back into it and started to take it more seriously. I was suffering from depression and I needed a mindfulness project to get stuck into.

“People I met were so impressed with my work that they would ask me at the match, ‘Where did you buy that?’ When I told them that I’d made it, people commented on how professional it looked, and that got me thinking about turning my hobby into a little earner to save for my baby daughter’s future.”

The process is all underpinned by tradition and a routine and after dedicating hours upon hours to his craft, recognition instils a deep sense of pride as the club’s culture continues to be passed from generation to generation. 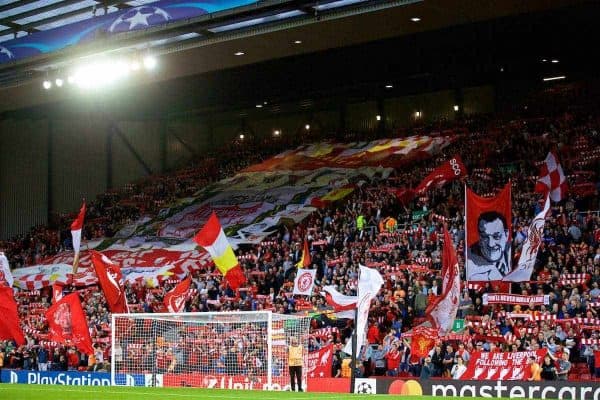 “I have always enjoyed the process, but the best bit is definitely the end. I love the matchday ritual of hanging my banner in its usual spot on the middle of the top tier of the Main Stand.

“When I see one of my flags on the telly, or when somebody mentions one of them on web forums etc. that recognition feels great. I’ve only recently begun taking commissions to make the flags for other people, but I can’t wait to see them popping up on the Kop and at away grounds.

“Ultimately, the reason I make these flags is to support the team and help to keep the banner making culture alive within the club. To me, it is one of the things that sets us apart from other clubs.”

‘Truly a Labour of Love’ 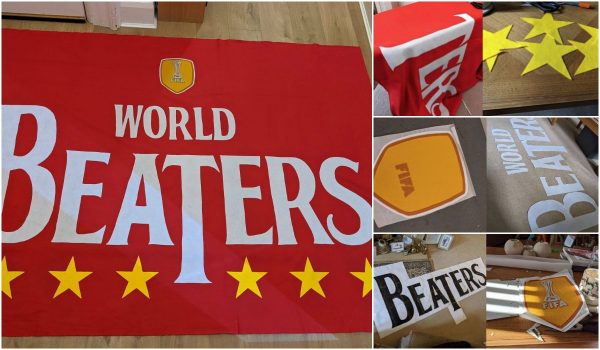 To get the finished product, however, the process is a “painstaking” but enjoyable one such is the intricate level of detail and perfection which Mark prides himself on when creating each bespoke piece.

And from the small level of detail to his process he offered us, it is clear to see how near and dear the art form is to him.

“The process of making a banner is quite a painstaking one, which I enjoy as it gives me a focus,” Mark explained.

“People have suggested various shortcuts I could take – using a projector or using a laser cutter – but I am a bit old school about things like this. I do use a computer to draft my designs, but I am no whizz kid with graphics software – I just use Publisher.

“I then print the design, which comes out on about 40 pieces of paper that I then have to tile together with sellotape. I then hand cut all the different elements with nothing more sophisticated than a pair of scissors and use these as stencils to mark my fabric.

“The fabric I use is heavy-duty cotton drill, and the designs are made of wool-rich felt. I then affix Bondaweb to the back of the designs before cutting out the shapes. After a lot of careful measuring and checking, it is then ready to be ironed into place on the background. 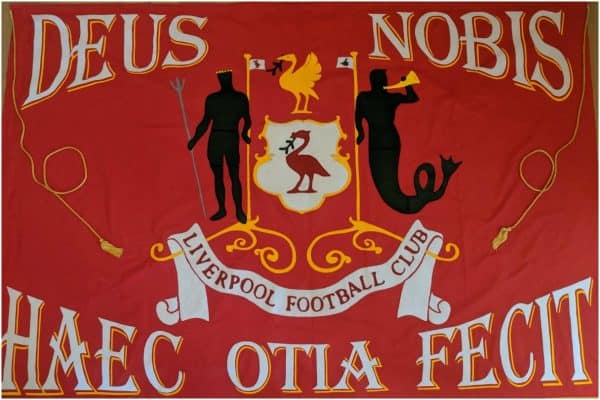 “Altogether, it typically takes about ten hours work to produce an average design, which, as I have a full-time job, I typically spread out over a week or so. I then pass the banners on to my trusted seamstress Debbie who applies the finishing stitches and seams.”

A team effort where the results speak for themselves, with each a “labour of love” – from commemorating title triumphs, and those soon to be, to the city of Liverpool itself.

“I am proud of all the pieces I have produced, but a few stand out, all of which I have made in the last year. One is the ‘Crowned Champions’ flag I have made for when the big day finally arrives, which takes inspiration from the shirt worn by Kenny’s boys of ’88,” Mark added.

“Then there is the ‘World Beaters’ flag, which pays tribute to Liverpool’s two greatest exports – LFC and The Beatles. But undoubtedly the flag of which I am most proud is the one with the City’s coat of arms and its motto – Deus Nobis Haec Otia Fecit.

“As a Latin teacher, I’d been planning this one for a long time, and no expense was spared in making it, with gold fringing, tassels, tiny details – the full works. It took me around a month to make and it was truly a labour of love.”

From Concept to Creation 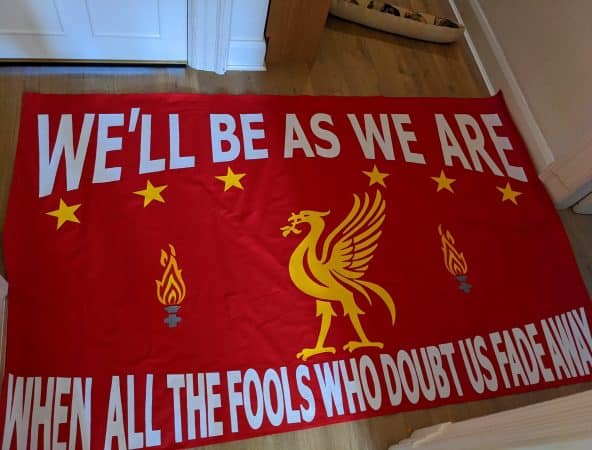 Before all the meticulous work leads to the final product, however, an idea must first be born – from words, phrases, a rough sketch or even the vaguest of concepts.

And Mark encourages Reds to “think classic” so the banner extends beyond just one season, or even one game, with the time and cost for each lending itself to a long run supporting the Reds both near and far.

“I can work with as little or as much information as the customer wants to give. Some people just have some wording or a design in mind, while others just have a vague idea.

“Either way, I work closely with them to produce a finished design that they will be happy with, and I am a pretty creative thinker with lots of ideas of how different fonts etc. can be used to improve the impact.

“I have actually talked myself out of a couple of commissions by being too honest with people.

“For instance, one enquiry recently was to request an ‘asterisk’ banner to stick two fingers up at our rivals. If that is what you want, you’re probably better off getting a cheaper banner printed, or just painting it yourself on a bedsheet, and I don’t mind turning away business if I think someone is making the wrong choice – after all, it is only a hobby for me and I can only work on one banner at a time. 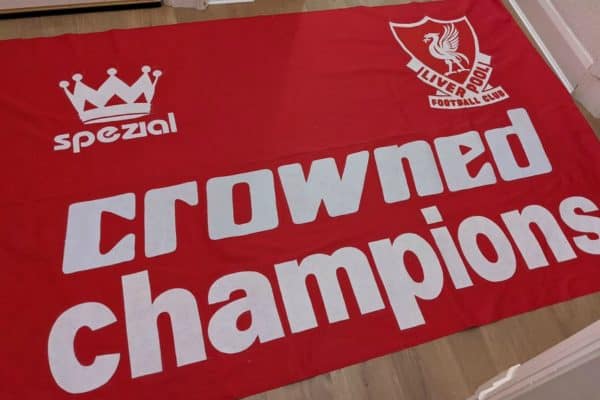 “Due to the materials and processes I use, I know that my banners are expensive – prices are individually tailored, but start at around £200. Therefore I don’t want people to spend that much money on a ‘one match (or even one season) wonder’. I encourage them to think classic.

“I want to make them a flag that they will still be proud to hang in 10 years time, and I make them to last a lifetime.”

* Thanks again to Mark for sharing his story and telling us all about ‘Handmade LFC Banners’, which you can find out more here and on Instagram and Facebook @HandmadeLFCbanners.