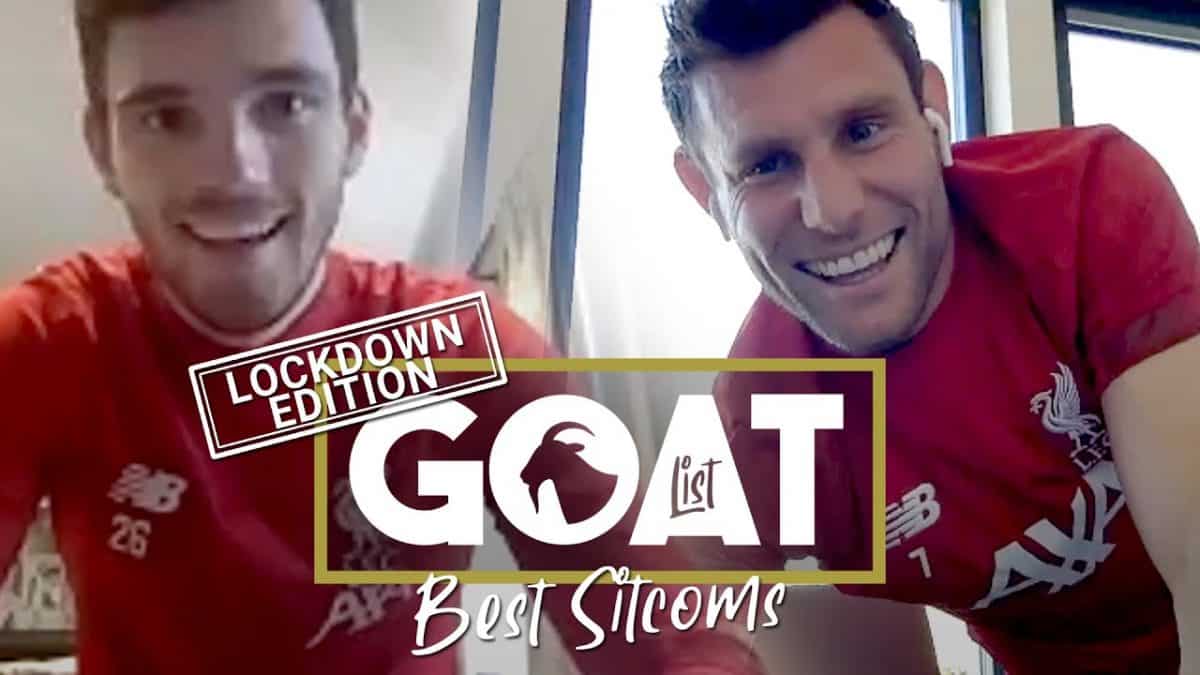 James Milner and Andy Robertson have proven a brilliant on-screen duo over the past year or two and they’re back to discuss their favourite TV comedy programmes!

A ‘lockdown’ edition of the pair’s GOAT list sees them discuss some of the best (and worst!) of British shows and it all begins in classic fashion, with Andy Robbo falling to the floor as he reenacts an all-time memorable scene.

Questions of the Scottish left-back’s internet connection speed aside, it’s a typically engrossing and hilarious run-through of their television favourites of yesteryear—although that said, we’re with Milner: as it’s UK shows only, the exclusion of Friends is a bit of a downer!

A few older shows get the boot straight away, while Robbo viciously tells the producers of ‘Benidorm’ that they should have ended it after the first season.

Then the real talk begins: the classics who will be front-runners for the GOAT award, complete with Milly’s best Inbetweeners impression.

There are of course a few which only one or the other has seen—Milner berates Robbo for not having seen ‘The Office’—before our vice-captain lands the pun of the day award by declaring he had never watched ‘Father Ted’ religiously.

When debate arises over which of ‘Father Ted’ and ‘Dad’s Army’ should be included in the top five, Robbo puts it in brilliant football terms as to why he’s letting his team-mate decide.

“I trust you! It’s like a penalty, Kop end, 92nd minute, Milner’s got the ball in his hands…he’s gonna score! That’s the trust I’m putting in you!”

The final five are a mix of contemporary and classics, slapstick and subtle, and guaranteed to make most of the population laugh one way or another.

Just like our GOAT video duo, in fact! Another quick acknowledgement that ‘Friends’ would have been a front-runner (“Pivot!”) comes before the final decision as to the winner, as well as a truly abysmal rendition of the ‘Two and a Half Men’ theme tune from Robbo and some more atrocious acting.

Classic watching, just like the shows themselves! Stick to the day jobs, fellas!