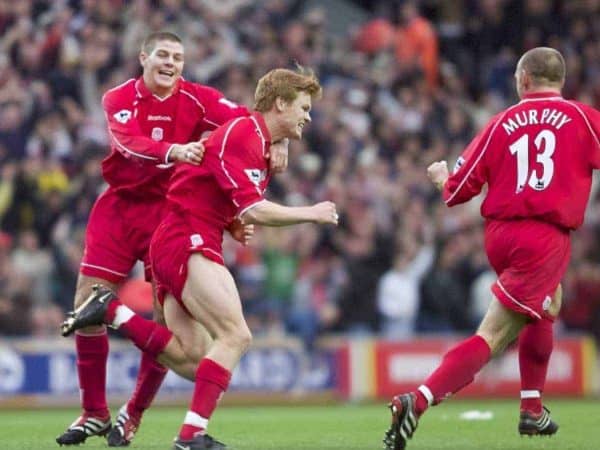 Liverpool’s 2001/02 season saw Gerard Houllier’s side secure the club’s highest Premier League finish since its formation, in a campaign which was anything but smooth sailing.

The Reds headed into the season off the back of an incredible cup treble and with a place in the Champions League for the first time.

Anticipation and a wave of optimism was in the air for what 2001/02 had in store for the club as Houllier continued to hit all the right notes at Anfield.

Liverpool’s attack was one to fear, with Michael Owen, who had just won the Ballon d’Or, and Emile Heskey leading the way, with Robbie Fowler waiting in the wings before his departure midway through the season.

The England duo would help lead Liverpool to the cusp of the Premier League title, with the club finishing as runners up to an Arsenal side who set an impossible task during the run-in.

Liverpool would net 67 goals in the Premier League with 15 different players etching their names on the scoresheet, while they would limit the remaining 19 teams to just 30 across the entire campaign, the best defensive record in the topflight.

Liverpool’s No. 10 started the campaign as a 21-year-old in his fifth full season as a member of the first team and just three days after turning 22 in December, he was awarded the Ballon d’Or.

Despite his tender age, Owen continued to dominate and remained integral to Houllier’s side – to this day it is still astonishing to think of how young he was throughout all of this.

His prolific partnership with Heskey returned 28 goals in the Premier League, with Owen sinking 19 of his own – 28 percent of Liverpool’s goals that season and his career-best tally – with a 1-1 draw with West Ham heralding his 100th goal for the Reds.

Goals in the Charity Shield and UEFA Super Cup saw Liverpool win five trophies in one calendar year and despite his best efforts to see the season end with the league title, both Owen and Liverpool would fall short.

On November 27, 2001, Liverpool agreed to sell Fowler to Leeds United for £11.75 million and merely two days later the Reds’ No. 9 was no longer at Anfield.

Fowler had fallen behind Emile Heskey and Michael Owen and even Jari Litmanen in the pecking order and sought pastures new after nine years, 330 games and 171 goals.

And in typical Fowler fashion, his final goals for the Reds during his first stint would come in a hurry, rifling three into the back of the net against Leicester in October.

He would, of course, return in 2006 for one-and-a-half seasons, adding a further 39 games and 12 goals to his tally for the Reds.

Unlike the seasons which came before, the summer of 2001 was a relatively quiet one as Houllier backed the side he had assembled.

Much like Jurgen Klopp in present days, tweaks were all that was needed to give the Reds the best chance to build on their success.

Jerzy Dudek and Chris Kirkland were added to the fold, as was Milan Baros, who didn’t arrive until midway through the season, but left-back John Arne Riise was the first to arrive, joining from Monaco for £4 million.

He would swiftly earn himself cult hero status and was pivotal to Houllier’s counter-attacking style, with his ability to strike a ball with both power and precision leading to some truly astounding goals in his debut season.

The strike against Everton at Goodison Park endeared him to many but it was his thumping free-kick against Man United which is still heralded as one of Liverpool’s best-ever Premier League goals – not a bad way to settle into the club.

Riise would finish the season with seven league goals, but much like Liverpool left-backs before and after him, his defensive actions are what raised the most eyebrows – – we’ll leave it at Southampton and own goal.

It was the health of Liverpool’s manager which emerged as the most significant moment of the season after he was rushed to hospital at half-time during the 1-1 draw with Leeds in October.

He was required to go into surgery immediately, leading to a five-month absence where assistant Phil Thompson would take charge.

The Reds would remain firmly in the title race, however, as they would lose just three times in the league in his absence during a 24-game run.

But despite Houllier’s return in March and just one defeat in their final seven games, Arsenal failed to lose any of their remaining 21, which included winning their last 13 in a row, ensuring the Gunners assumed first place to leave Liverpool in second.

It would be their equal-best finish, with Klopp’s current side set to preside over a new benchmark.

Redknapp reaches the end of the road…

Having failed to play a single match in 2000/01 due to a string of injuries, former captain Jamie Redknapp would end his Liverpool career on somewhat of a high the following season.

On his last Premier League start for the Reds, Redknapp would show his ball-striking abilities for the last time with a first time volley which thundered into the net against Charlton on October 27.

He would play only eight games in all competitions in 2001/02 before succumbing to injury and eventually moving on to Tottenham in April.

A good professional who could have been much more without injuries, he ended his Liverpool career after almost 11 years with 308 games, 41 goals and two pieces of silverware to his name.