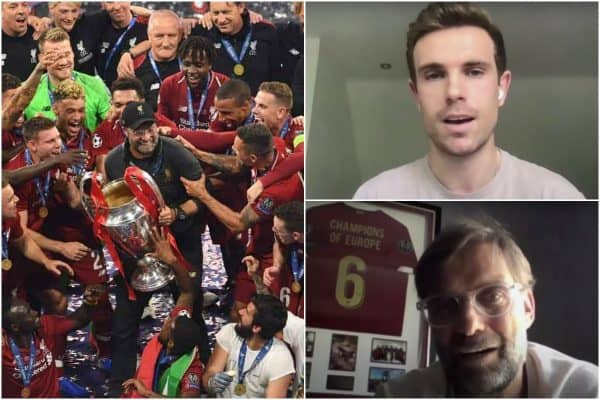 Liverpool’s past shortcomings and heartbreaks moulded the Reds into a team who thrive off the tension and win the European Cup, for Jurgen Klopp and Jordan Henderson.

While the Reds are on a wave of success which shows no signs of stopping any time soon, the early days of Klopp’s reign returned more heartbreak than it did silverware.

The signs were clear, however, that the side the German was building was one which would learn from and embrace their missteps, as all great sides do.

And after falling short in the League Cup, Europa League and in their first Champions League final, Liverpool would return to conquer Europe – albeit with a dramatic flair, as usual.

But it is the lessons and the sour moments from such experiences which have moulded the team into one who “wants to be in the middle of the tension,” taking responsibility at the pivotal moments and consistently fighting for honours.

And for Klopp, the journey of Mohamed Salah, from being forced off through injury against Real Madrid in Kiev and missing the second-leg against Barcelona to scoring an early penalty against Tottenham, offers the perfect representation of his team.

“The goal has the same importance [as Origi’s], it’s just two minutes so everything can happen after that so it was incredible,” Klopp explained to BT Sport during a throwback to the final.

“Would I want to be, as a human being, in this situation of having to take a penalty in a final? I’m not sure anymore.

“These boys want to be in the middle of the interest and the tension and he’s proved so often that he’s made for this kind of game.

“I was really happy for him because it was a tragic story the year before and we all know what happened there. And that you can come back and sort things and put it right, that’s wonderful.

“There were so many difficult moments in that season for the boys. We lost 3-0 in Barcelona when he had a really big chance to make it 3-1.

“It was that moment where he hit the post then he could not play the second game and then you could see his relief after we’d beaten Barcelona that’d we would be in another final.”

As for the manager’s favourite moment from the final, Divock Origi was handed the crown in what was a relatively lacklustre final where Liverpool had to show a different side of themselves to get over the line.

“The wonderful Divock Origi goal. It was not our best game, it was not the best game of Tottenham. It was a final, we had to learn that as a team that we needed to win this kind of average games,” Klopp added.

“And in the moment I knew, when Divock scored the goal, I knew for tonight it was enough so we will win. That was my biggest memory. It was job done, and I really loved it.”

But that very adversity faced by the entire squad that Klopp noted is what Henderson later pointed to as the key to their success.

Liverpool’s failings have made the team what they are and, vitally, it ensured missing out on the Premier League title prior to facing Spurs did not derail their drive or focus.

“It was an accumulative thing, if you obviously look at Madrid, the league that season, if you look further back to the finals and League Cup finals that were lost as well,” Henderson told BT Sport.

“So if you look back there were a few moments where we’ve been through those tough times together. We always responded in the right way and we always kept going and kept improving so I knew after the last game of the league, I knew it would in some way help us going into the final to make sure it wasn’t going to happen again.

“Certainly the Madrid game, you learn a lot from playing in finals and especially a Champions League one.”