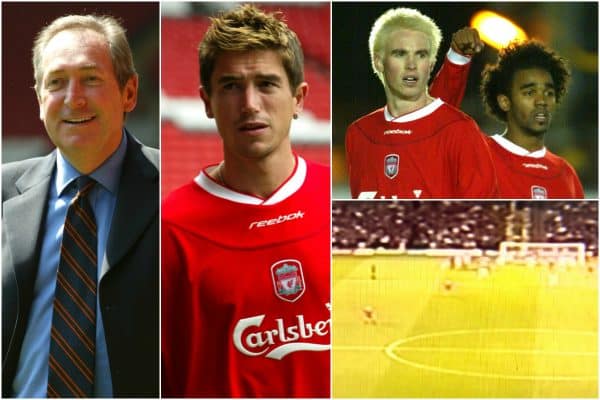 Kewell’s fine start, a goal on CCTV & the French injection – Houllier’s final season at Liverpool in 2003/04

Gerard Houllier left Liverpool after six years in the summer of 2004, following a season that saw the club finish fourth in the Premier League with only 55 goals scored.

In terms of Liverpool managers in the Premier League era, Houllier deserves to stand as one of the most highly regarded, as he revitalised the club and brought in a new generation.

But his final season in charge was not the most memorable, ending in a departure by mutual consent after finishing fourth in the league, dropping out of both the UEFA Cup and League Cup in the fourth round, and the FA Cup in the fifth.

It was a campaign that forced the club’s owners into change, and the disappointment of the season just gone ultimately paved the way for a triumphant first year under Rafa Benitez.

That, however, is a story for another time, with Liverpool releasing another compilation of every league goal scored in Houllier’s final season on Merseyside.

The early promise of Kewell

Harry Kewell has a big-name signing when he arrived in 2003; a £5 million acquisition from Leeds who had already made an impression on the Premier League.

His time at Liverpool is now better remembered by his injuries, but his first season with the club remains hugely underrated, with seven of his 11 goals coming in the league.

The Australian’s two-footed dribbling ability, eye for a pass both short and long and a penchant for finding the back of the net made him a key player for Houllier in 2003/04.

Kewell was one of four signings for the first team that summer, with Houllier also bringing in Steve Finnan and two hotly tipped countrymen, Florent-Sinama Pongolle and Anthony Le Tallec.

The deal to bring the French duo to Liverpool had been struck long before, and the manager placed considerable faith in two youngsters who had shone at the Under-17 World Cup in 2001, both scoring in the final.

Their time at Anfield amounted to 98 appearances combined, but Pongolle and Le Tallec did show glimpses of their potential in 2003/04, including as their combined brilliantly to lay on Steven Gerrard’s goal in the 2-2 draw with Bolton.

The overriding image of Jamie Carragher at Liverpool is as the uncompromising centre-back, but in the early 2000s it was still a common occurrence to see him fill in at full-back.

And the sight of Carra charging down the left wing is certainly one to behold!

Emile Heskey only scored 12 goals in 2003/04, with seven of those coming in the league; he was Liverpool’s third-highest appearance-maker, with 47 in all competitions and 35 in the league.

This was to be his last season on Merseyside, as his influence faded and Houllier’s reign drew to a close, but while he was less prominent in the penalty area, when he did score they were often spectacular.

Take his strike in the 2-1 win over Fulham—a fantastic finish.

The virtues of CCTV

Today it is genuinely unthinkable: a goal scored in the Premier League, not caught by any TV cameras.

But Vladimir Smicer’s header in the 2-2 draw with Man City came during a power cut at the City of Manchester Stadium, and therefore the only video evidence is available via the stadium’s CCTV footage.

Oh, the days before smartphones and every game being on TV somewhere.

Speaking of Smicer, there is a case to argue the Czech as a sleeper candidate for ex-Reds who would fit into the style now played at Anfield under Jurgen Klopp.

His work rate, quick feet and selflessness would likely endear him to the current manager, though whether he would be able to compete in a squad of this calibre is another question.

While Kewell was the marquee signing, and there was great intrigue around Pongolle and Le Tallec, Finnan’s arrival from Fulham in a £3.5 million deal was decidedly more low-key.

And 2003/04 wasn’t his best campaign for the Reds, but there were indications that he would go on to prove a bargain, particularly with his deep, searching crosses from right-back.

He went on to make 217 appearances for the club, excelling under Houllier’s successor; a solid buy.

Gerrard was named full-time Liverpool captain in October 2003, and as the season wore on he grew into the role while his confidence on the pitch soared.

It took him until November, and 18 appearances in all competitions, to score his first goal in the 3-1 win over Birmingham, and it certainly wasn’t his most productive season on that front, but it was a strong one from the No. 17 nonetheless.

A disappointing campaign in 2003/04 led to Gerrard considering his future at the club, but fortunately he stayed and went on to forge a legacy at Anfield.

The joy of Hyypia’s headers

There weren’t many better sights in those fallow years towards the end of Houllier’s tenure than that of Sami Hyypia rising highest to power home a header.

The Finn had a canny ability to glide through the air and meet the cross with perfect timing, as goals against the likes of Wolves and Bolton attest.

It is telling that Liverpool only managed to score 55 goals in the Premier League in 2003/04; the Reds have produced a lower tally only four times since 1992.

There was a clear over-reliance on Michael Owen, who struck 16 times in the league—no other player broke the 10-goal mark, with Kewell and Heskey the closest on seven each.

Houllier’s side struggled as a result, and it is an issue that Rafa Benitez was forced to contend with in his early years as manager, with the arrival of Fernando Torres in 2007 marking a new era of goalscorers on Merseyside.