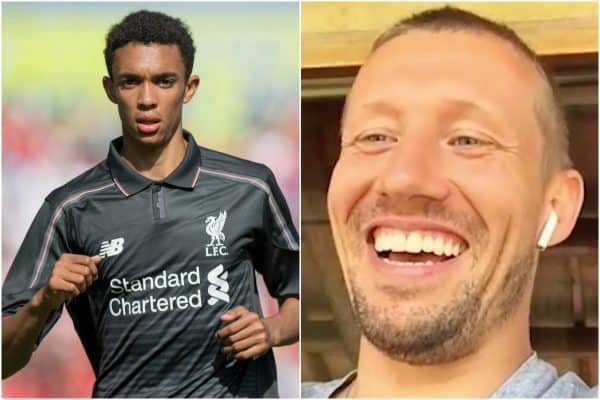 Lucas Leiva has claimed he knew Trent Alexander-Arnold would go on to be “one of the best players in the world” after their early training sessions together at Liverpool.

Trent was just 16 when he received the surprise call-up to the first-team squad for a pre-season friendly at Swindon in 2015.

The game was decided by a stunning goal from Christian Benteke and another from Sheyi Ojo, with Lucas Leiva playing the full 90 minutes and the Reds’ new young right-back replaced just before the hour mark.

Liverpool’s future No. 66 had already trained with the senior squad, and even travelled for the infamous 1-0 defeat away to Real Madrid in the Champions League in 2014, with it clear he had a special talent.

Lucas has lavished praise on the 21-year-old he believes is a “complete full-back,” and revealed how the squad were convinced he had the potential to reach the top.

“He was very shy and Brendan was in charge,” he told LFCTV of Trent’s initiation at the County Ground.

“I remember he wasn’t comfortable but we could see he was at a different level, I would say, for his age, his quality on the ball.

“So after he started to train with us in the first team he waited patiently, but we were sure that he would be a Liverpool player and he would be one of the best players in the world.

“I was sure because you just could see on a daily basis how many qualities he had, his crosses and his passing. He is just a complete full-back.”

In terms of competitive games, Lucas played just nine times alongside Trent, including both FA Cup clashes with Plymouth as Jurgen Klopp rotated his side for the cups in 2016/17.

That proved the Brazilian’s final season with the club, and he has now established himself as a key player at Lazio, with the club challenging for the Serie A title prior to the campaign’s suspension.

His role in those last days at Liverpool was as a positive influence in the dressing room, and he explained how he helped Trent to “feel comfortable,” while praising him as a “star player.”

“Of course, he still has to improve a lot but he’s already had amazing seasons,” he continued.

“I think the last two seasons he has been a star player.

“Trent is a good boy, he’s a Liverpool boy and we can see how much he enjoys playing for Liverpool.

“I always try to help the young players—I think it’s important to make them feel comfortable and after it’s up to them to learn and improve.”

Lucas also spoke on his desire to see Liverpool clinch the Premier League, as he continues watching on as a fan in Rome, where himself is hoping to return to action and seal another major honour.

“I could see when I left the club, I was sure that Liverpool were going to win trophies and important trophies,” he continued.

“And I’m happy to see so many friends and Jurgen winning a lot of things and fighting now [for the title].

It is warming to hear the former No. 21 speak so fondly of his former club, and the next generation of talent cementing themselves as long-term fixtures.