A “change of heart” from police over safety issues surrounding home-and-away fixtures on the Premier League‘s return should see Liverpool win the title at Anfield.

It had been widely accepted that the current campaign would be completed at neutral stadia, as this would have provided the most sensible means to avoid spreading coronavirus.

But it emerged on Monday night that all 20 clubs would prefer to play out the remaining fixtures at home grounds, with the Reds looking at four more games Anfield before the end of 2019/20.

And according to the Mail police forces have had a “change of heart” over their stance, following “positive talks” with the government’s department of culture, media and sport.

Representatives from the Premier League, Football League and the FA were also involved, with it resolved that local police forces would be responsible for green-lighting home stadia being used.

The Mail claim that “a number of police forces have no issues with matches being played at their original venues, as long as a number of safety criteria can be met.”

These include the commitment of enough stewards to ensure social-distancing guidelines are followed, with clubs providing the funds for officers required.

“One of the main reasons for the Premier League initially proposing completing the season at eight neutral venues was fears over fans turning up en masse outside matches to be played behind closed doors,” the report continues.

“Whilst this remains a concern several clubs have pointed out that it could also be an issue at neutral grounds.” 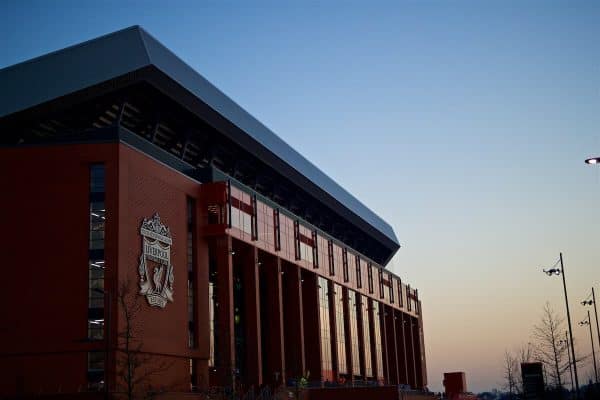 This is a logical point, as the neutral stadia would still be announced prior to the game.

Liverpool were already forced to refute claims from the city’s mayor, Joe Anderson, that “there’s not many people who would respect what we were saying and stay away from the ground,” with the club “disappointed” with his comments.

The return of the Premier League will require a measure of trust in supporters to ensure games are able to run smoothly, with the prospect of a majority of the 92 remaining fixtures being broadcast on TV a sweetener.

Jurgen Klopp‘s side require six more points to clinch the Premier League title, and could therefore do so without having to leave Merseyside.

Their next scheduled game is away to Everton, while the following fixture is at home to Crystal Palace; win both, and the title is Liverpool’s.