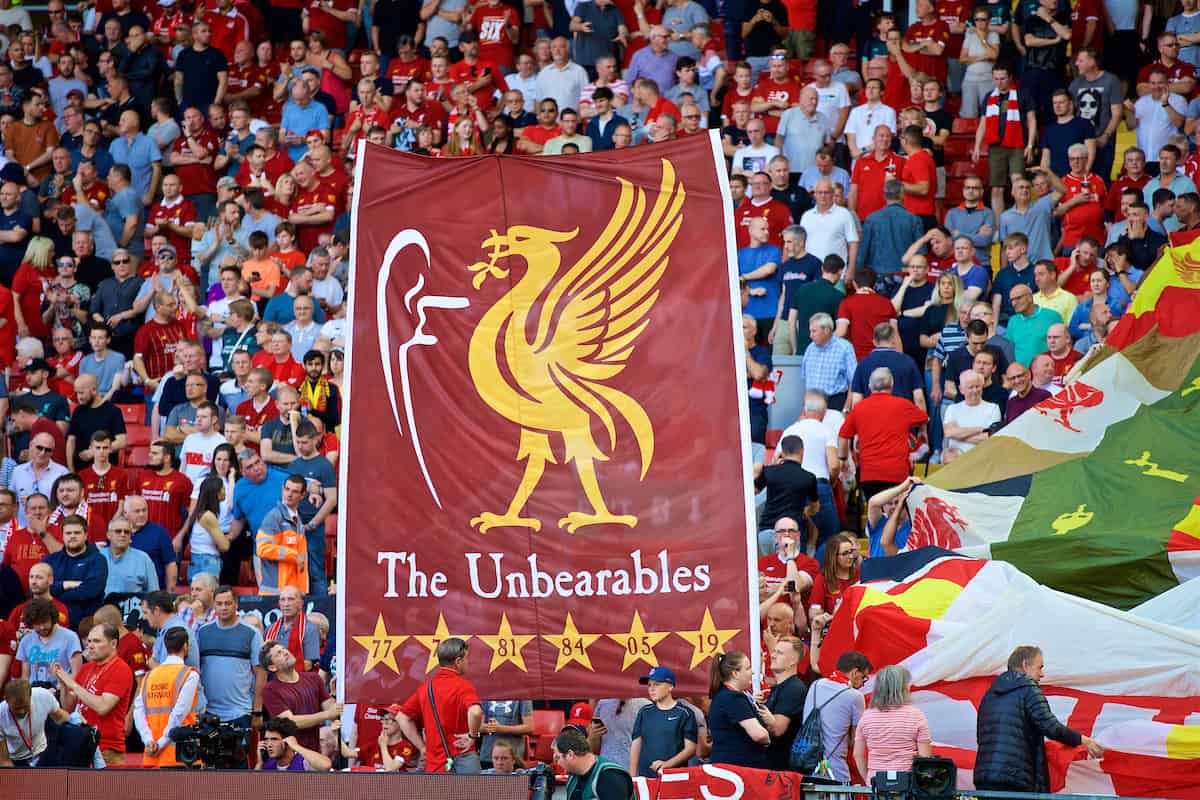 When talk of voiding the season due to the coronavirus pandemic centres around denying Liverpool a first Premier League title, logic goes out the window for many.

Before the first home game of this season, Liverpool fans unfurled a banner on the balcony of popular pre-match pub ‘Hotel Tia’.

Emblazoned proud and defiant were the words ‘The Unbearables’ atop six, count them, six stars.

It was a typically Scouse riposte to an internet campaign that had come to define the back end of 2018/19.

From January onwards, rival fans had whipped themselves into a state of frenzy. The prospect of our support celebrating silverware had driven many to distraction.

Put simply, Liverpool had to be stopped at all costs, both domestically and in Europe. It was the duty of first Man City and then Tottenham to ‘save football’.

The irony of a state-owned cub keeping their end of the bargain was seemingly lost on these keyboard warriors. To their dismay Spurs were downed in Madrid and so ensued what we can only imagine was a miserable summer.

All because Liverpool’s fanbase had the temerity to revel in a sixth European Cup.

The term ‘rent free’ is overused on social media; a quip trotted out to belittle opposing views. It has, though, come to define an unhealthy obsession opposition fans have with our football team.

Some, it appears, take more pleasure out of Liverpool dropping points than their own side winning any on a Saturday. And it’s not just the obvious candidates either.

The morning after that miraculous comeback against Barcelona last April an irate Wolves fan called into Radio 5 Live to implore either one of Ajax or Spurs to topple the Reds in Madrid as he ‘couldn’t stand them’.

For context, the two clubs had only competed in the same division in 23 of the previous 65 years and never gone head-to-head for a league title or domestic cup.

Shamefully these same characters are using a global pandemic as a means with which to ridicule Liverpool and our wait for a league title. Others are disguising their hatred with faux concern for those affected by this dreadful virus.

It’s out of such bitterness that talk of ‘null and void’ has arisen; so too, a need to safeguard next season.

The outbreak and spread of coronavirus is unprecedented, and while thousands perish talk of restoring football to the national calendar seems misplaced.

The wellbeing of those infected and impacted, as well as those NHS workers battling to save lives, is the priority. Liverpool FC have reiterated as much.

But it would be remiss of the Premier League to not at least consider options. And, as we know, they are doing just doing that at fortnightly meetings, albeit conference calls from which precious little emerges.

The dilemma they face is appeasing all parties. No scenario mooted (be it points per game or neutral venues) is without opposition. Similarly, halting the campaign and declaring current positions final leaves them vulnerable to all manner of lawsuits.

While media coverage varies, most outlets are in agreement that COVID-19 is here to stay—in some form—for the foreseeable. 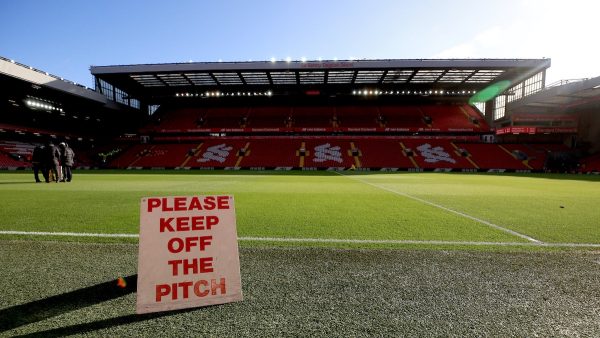 A much-anticipated vaccine may arrive in September at the very earliest and even in that best-case scenario, will take months to roll out if the government’s targets for testing are anything to go by.

What this confirms is next season will be very different indeed.

Scanning social media you would be forgiven for thinking otherwise. 2020/21 is being held up as an imaginary wiping of the slate. ‘Neutrals’ are desperate to scrap this season in order to save the next, as if things will magically go back to normal in August.

The reality is football will be played behind closed doors for 12 months at least and all manner of provisions will surround each and every fixture moving forward. A reset is miles off.

Which begs the question, why abandon 92 behind-closed-doors games to begin another nine months’ worth, and bring about untold upheaval in the process?

The likes of Harry Kane have spoken of a cutting-off point. In theory we have one, which is next year’s European Championship. As things stand that is set to begin in June 2021.

Squeezing in an entire season’s worth of domestic and European football before that is improbable. Most are coming round to the idea that 2020/21 will take a different shape, potentially one minus cup competitions.

This would allow for wriggle room and a later start to the season—hopefully when the all-important R rate is under one.

It would also free up time to conclude this current campaign which, crucially, is already 75 percent complete.

That has to be the priority, both for the integrity of the competition and the very survival of clubs.

Indeed, the spectre of broadcasters reclaiming payment to the tune of £750 million is lost on those with an agenda. Some may perform an about-turn were their own side faced with extinction.

While certain clubs have displayed distasteful self-interest, Liverpool have maintained a relative silence throughout the current suspension.

This extends to the Premier League meetings themselves if reports are to be believed. It also extends to much of the fanbase, most of whom are refusing to rise to mundane ‘banter’.

Tribalism is part and parcel of football but anyone using coronavirus (and by extension the deaths of thousands of innocent people) to mock Liverpool’s title drought is quite frankly a disgrace.

Just as despicable are those feigning concern for public safety whilst petitioning for the league to be cancelled and wiped from the history books (or relegation to be removed in the case of Brighton).

It’s these same oddballs that were pedalling the idea that VAR was handing the Reds an unfair advantage. Up until February that was all they had to cling to. Now ‘LiVARpool’ has been replaced of talk of a ‘tainted title’ or ‘19*’.

Gary Neville has spoken of wearing a t-shirt with an asterisk on it, not realising that thousands of Scousers will be doing the same. We revel in such self-deprecating humour.

To some, a global pandemic, costing lives and livelihoods, is a welcome distraction from their own teams’ failings. A 25-point deficit is far easier to dismiss than dissect. This eclectic group would also be happy to have two seasons curtailed if it stopped us in our tracks.

The great irony, of course, is that when football resumes and Liverpool clinch that 19th crown, it will be those same people declaring us unbearable and unpalatable.

And just like that ‘Unbearables’ banner, you can bet there will be a banner with a huge asterisk on it on The Kop next time fans are allowed.