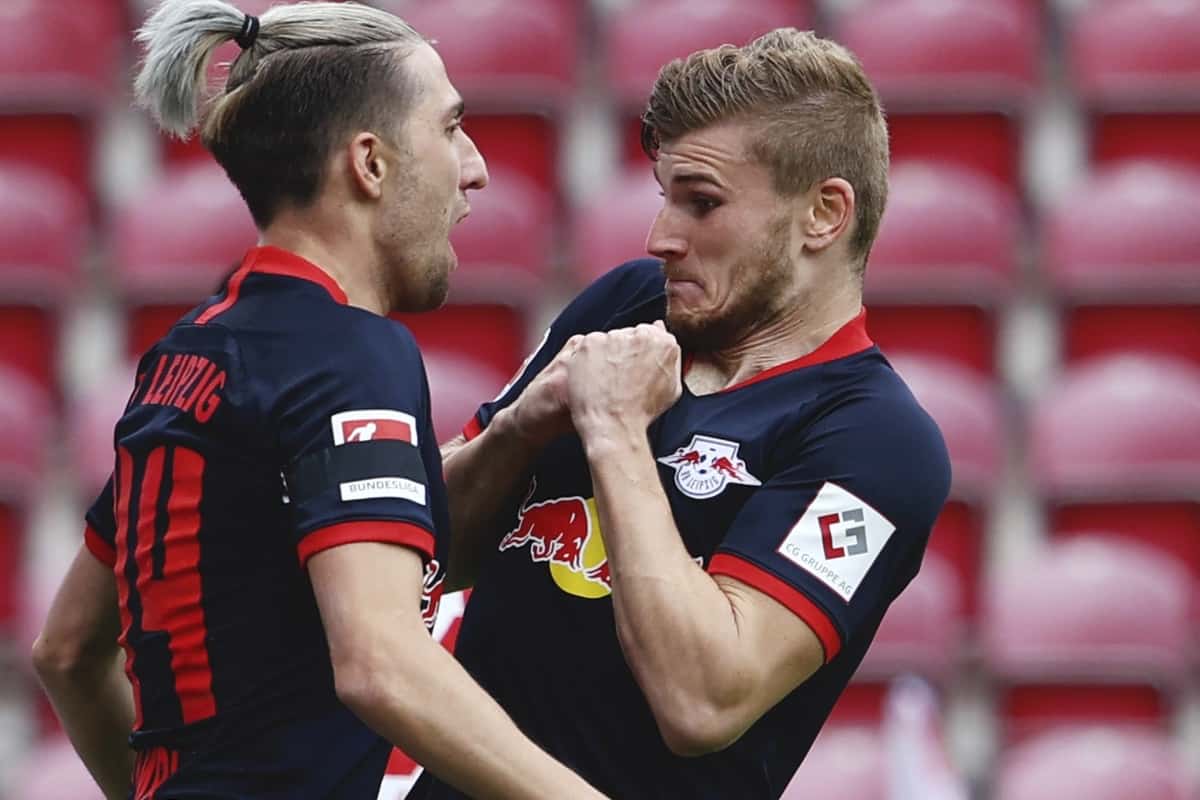 Timo Werner struck a hat-trick as RB Leipzig thrashed Mainz on Sunday afternoon, with it then revealed that the striker had met Jurgen Klopp ‘virtually’ in recent weeks.

Leipzig’s No. 11 has been one of the most prominent features in UK coverage of the Bundesliga since its return earlier in May, given the Reds’ well-known interest.

Werner has publicly addressed claims he could join Liverpool already this year, believing he would fit in well in Klopp’s system, and recently The Athletic’s James Pearce revealed he is “absolutely desperate” to make the move.

Sunday saw the 24-year-old start in Leipzig’s second game back from the restart, lining up alongside Yussuf Poulsen in attack as the title challengers steamrollered Mainz.

He opened the scoring after just 10 minutes, latching onto Konrad Laimer’s cross and sending a right-footed shot across the face of goal and into the bottom corner; it was his first strike in five games.

A towering header from Poulsen and an improvised finish from Marcel Sabitzer set Leipzig up for a comfortable 3-0 lead at half-time, with Werner then adding two more after the break.

His brace was sealed with a left-footed finish following a brilliant run from Kevin Kampl—Klopp’s last signing at Borussia Dortmund—and his third showcased his brilliant instincts, pace and movement, surging onto a quick free-kick to lob Florian Muller.

Mainz—who ended the game with Liverpool loanee Taiwo Awoniyi up front—were hapless, but that should not detract from the excellence of Leipzig’s breathless display and Werner’s expert finishing.

After the game, German journalist Rafael Honigstein told BT Sport that the striker had met with Klopp via video call during lockdown, as the likelihood of a switch to Anfield increases.

“There has been a meeting between him and Jurgen Klopp, at least a virtual one over the last few weeks,” Honigstein explained.

“I think [Liverpool are] a bit hesitant to pull the trigger because they haven’t quite figured out how much of a financial problem the coronavirus will present itself to football, coming over the next month in the Premier League.

“I think he’s waiting for things to fall into shape and it could be that the transfer window is much later than usual.

“This kind of deal would have been announced in April or May, this time it could be August or September, but I still think there’s a very strong chance he’ll end up at Liverpool.”