Liverpool went into 1999/2000 knowing it was a new era for the club, being Gerard Houllier’s first full season in sole charge as he sought to restructure matters on and off the pitch.

Roy Evans had left midway through the previous year, leaving Houllier to get to grips fully with the task in hand at Anfield.

By the summer he had clearly decided an overhaul of the playing staff was the first thing needed, and he took an unfamiliar approach at the time, looking around European clubs for gems he knew of, but local fans hadn’t seen in action much, if at all.

After all, ’99 wasn’t exactly a golden age of internet streaming!

This was very much the start of a rebuild for the Reds, and performances throughout the year suggested as much en route to a respectable fourth-place finish—though there were memorable wins and some fantastic goals scored throughout, as well as the briefest hint of a late title challenge as the Reds rose to second with seven games remaining.

As is always the case during a changing of the guard, some of the previously key names in the team were ushered out, with new faces taking on additional responsibilities—and some young faces stepping up in a big way during the season.

The Reds notched 51 goals in the Premier League, far fewer than the previous campaign—but also better at the other end of the pitch, keeping 15 clean sheets in 38 games as Houllier put an emphasis on rebuilding the team from the back.

There were 13 different scorers in the league, including a very notable first and only one player who reached double figures.

Continental precursor to our modern-day tactic 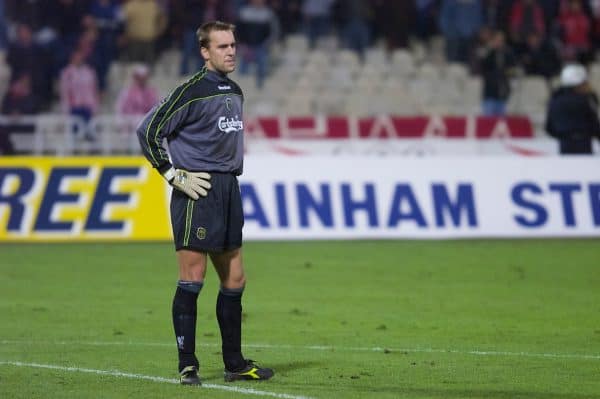 We were more used to seeing Liverpool sign players from Aston Villa and Wimbledon at this time, with the occasional scouting trip to Rosenborg and the like, but Houllier plundered exotic teams such as Lens, Vitesse, Marseille, Leverkusen, Willem II and, erm, Blackburn, during the summer of ’99.

From back to front it was a case of Liverpool getting new players on the pitch and involved in the goals, a few of which started with new goalkeeper Sander Westerveld’s quick distribution on the counter-attack.

It was rather different in technique and approach from watching modern-day Alisson play out, but the premise is the same: react quickly after transitions to catch opposing teams cold.

Dutch stopper Westerveld had an enormous throw, and even longer kick, and rather than a team-wide flooding forward under Jurgen Klopp, back then it was the forward line which possessed the pace and incentive to attack quickly—often alone, or perhaps with one or two supporting acts from midfield.

A goal against Derby also came courtesy of a pinpoint pass from Westerveld out to left-back…whether it was fully intended or not though, we’ll let you decide! 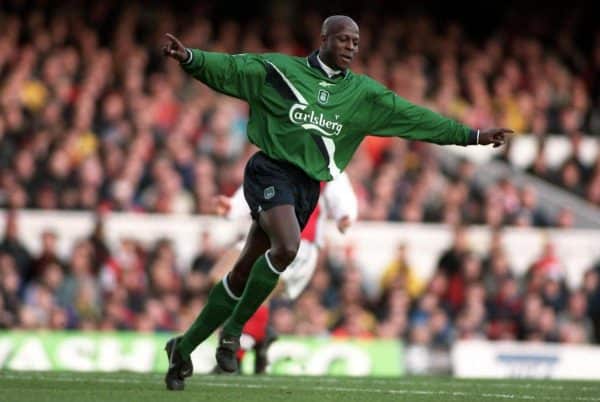 A bit of a cult figure on Merseyside for some, Titi Camara turned up to Anfield and looked like Ronaldo Nazario de Lima on a good day…or Ali Dia on a bad one.

There’s no doubting he had quality though and was a big part of the return to prominence for the Reds, roughly scoring one every three-and-a-bit games and being a decent foil for Michael Owen when the two paired up.

Camara scored some fine individual goals, especially against Leeds, Bradford and Arsenal, but many remember him most for an emotional goal and celebration against West Ham at Anfield.

The Guinean forward had sadly seen his father pass away in the build-up to the game and duly paid tribute after notching the winner.

Camara notched nine league goals that season with reasonable consistency and 10 all told, but was just pipped to the top scorer accolade by Michael Owen, who scored 11 (12 all competitions) thanks to two bursts of four-goals-in-three-games form in December and March.

First of many for a young Steven Gerrard 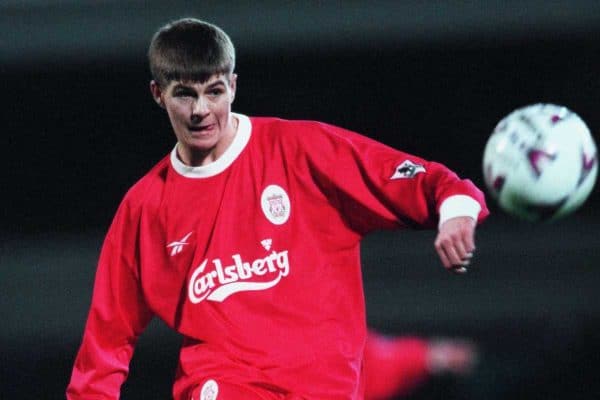 On 5 December, 1999, Sheffield Wednesday were put to the sword by the Reds, 4-1 the scoreline.

Hyypia scored one, Danny Murphy and David Thompson scored others—and so too, for the first time in a senior Liverpool game, did Steven Gerrard.

A slaloming run past two defenders and fine, fired finish into the corner led to joyous scenes for the No. 28, who would go on to score a total of 186 for the Reds all told.

New names on the scoresheet 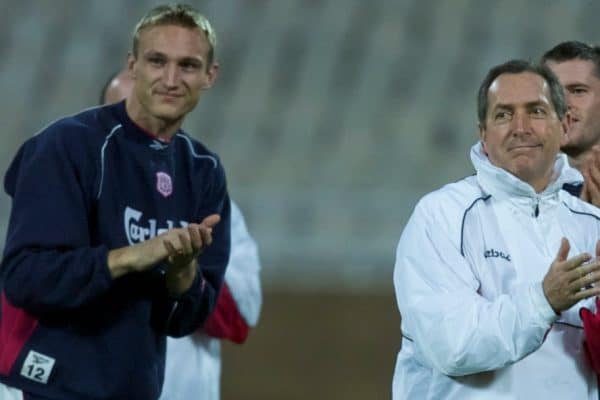 Given the new signings in the summer it was a campaign of new faces on the scoresheet…though some had to wait their turn. Vladi Smicer didn’t hit his first until January, while Didi Hamann took until February and Erik Meijer never found the net at all in league play.

But it was right near the start of the season in September when Sami Hyypia notched his first—after some typically hilarious goalkeeping from Manchester United’s Massimo Taibi.

Hyypia produced a great diving header to score at Anfield after the Italian horror signing completely missed a high ball into the box.

That was the first of two for the Finnish defender, who quickly took over captain’s armband duties in the continual absence of Robbie Fowler and Jamie Redknapp. He was the only player to play all 38 league games for the Reds that season and totalled 42 across all competition, the most in the team. 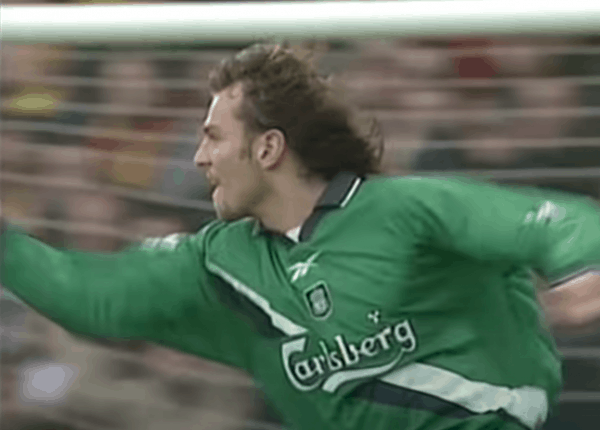 It wasn’t all about the fancy new arrivals, though.

We should mention that the very first goal of the campaign fell to the immaculate boots of Fowler, one of just three for the season in eight league starts, while Redknapp also notched the odd goal.

Danny Murphy scored a screamer from range against Leeds, but the best of both that game and the season as a whole came from the cannon ball left peg of Patrik Berger.

The Czech hit nine league strikes throughout the season; his Leeds effort was a goal of the season contender, but he blammed in further incredible strikes against the likes of Wimbledon and Man United and hit a penalty against Sunderland so hard it might actually still be travelling.

Paddy would never again have it so good with goals or fitness, sadly, and 99/00 was his best campaign in Red.

In contrast to the summer signings of Camara and Erik Meijer, Emile Heskey was very different: a young, powerful striker who could move on to a new level—and hopefully take the Reds there, too.

It was a club record fee of £11 million at the time, a lot to pay considering the Leicester forward wasn’t a regular on the scoresheet, but clearly Houllier wanted different aspects of his game to just his finishing.

With Karl-Heinz Riedle departing during the campaign and both Camara and Meijer to follow suit after it finished, Heskey—plus Owen and Fowler—was to complete the new-look, all-English front line for the Reds.

A first goal took five games to come along and he hit three in that first part-season for Liverpool, as well as starting to look the part in teeing up top-scorer Owen with assists.

He ended the season as first-choice striker as the Reds prepared for what came next, with 99/00 very much laying the foundations for an unforgettable season the year after. 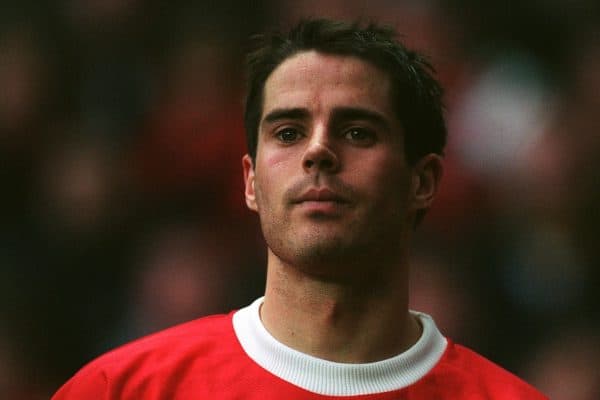