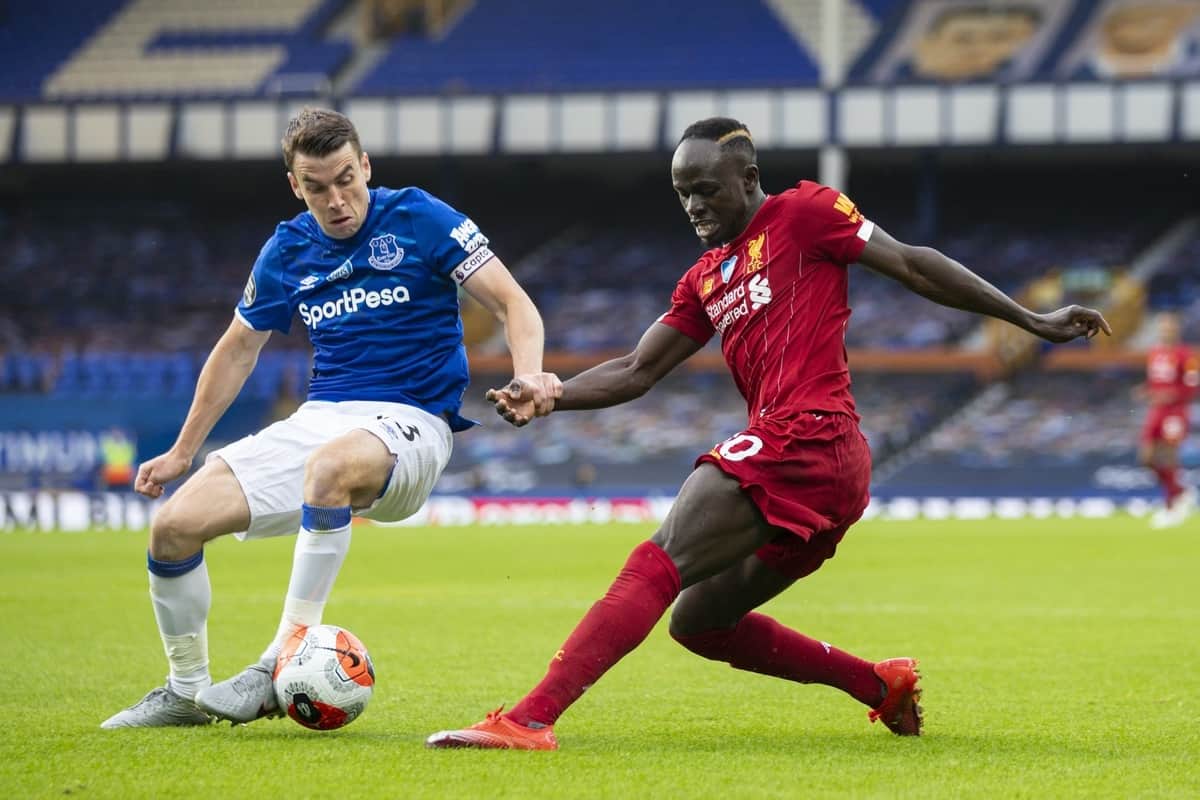 Liverpool’s wait for the Premier League title has been extended by Everton, as their return to action heralded another 0-0 draw in the Merseyside derby at Goodison Park.

In a derby played in strange circumstances, Liverpool looked to find their feet swiftly, with a strong side bolstered by the incoming Naby Keita and Takumi Minamino.

Fabinho looked to be off the pace early on, and it was the Brazilian’s header that allowed Richarlison through for the first chance of the game, his effort skidding wide of the post via Alisson‘s palm.

It wasn’t until after the first drinks break that the Reds enjoyed an opportunity of real note, and it came through Joel Matip who, on an evening when he surprisingly started ahead of Joe Gomez, missed the target with a free header.

Some relentless pressing from Minamino led to a bright opening soon after, but after Sadio Mane played Roberto Firmino through, the No. 9 ignored the onrushing Keita and dragged his left-footed shot disappointingly wide.

An injury problem for James Milner forced Jurgen Klopp into one of his five substitutes before the break, with Gomez sent on to take his place at left-back for the final minutes of the first half.

The manager made another at half-time, with Alex Oxlade-Chamberlain thrust into the game at the expense of Minamino—disappointing, given the Japan international’s productive 45 minutes, but understandable due to his similarity to Roberto Firmino.

Liverpool picked up the pace soon after, with Gomez’s support down the left flank proving vital and the interplay between Keita and Firmino a constant threat, the Guinean volleying wide after a smart move early on.

Another injury forced Matip off, with the demands of top-level football after such a long spell out taking their toll, in a way vindicating Klopp’s decision to save Andy Robertson and Mohamed Salah for the visit of Crystal Palace in midweek.

The Reds were almost undone as Dominic Calvert-Lewin flicked Richarlison’s cross on target, only for Alisson to make a brilliant save and Tom Davies to blast the follow-up against the post in a real let-off.

It was the flashpoint in a decidedly drab Merseyside derby, but as the final whistle blew for 0-0, at least it provided another point on the road to the title.

Now, unless Burnley win or draw on their trip to the Etihad on Monday night, Liverpool’s next opportunity to clinch the title will be away to Man City, on July 2.