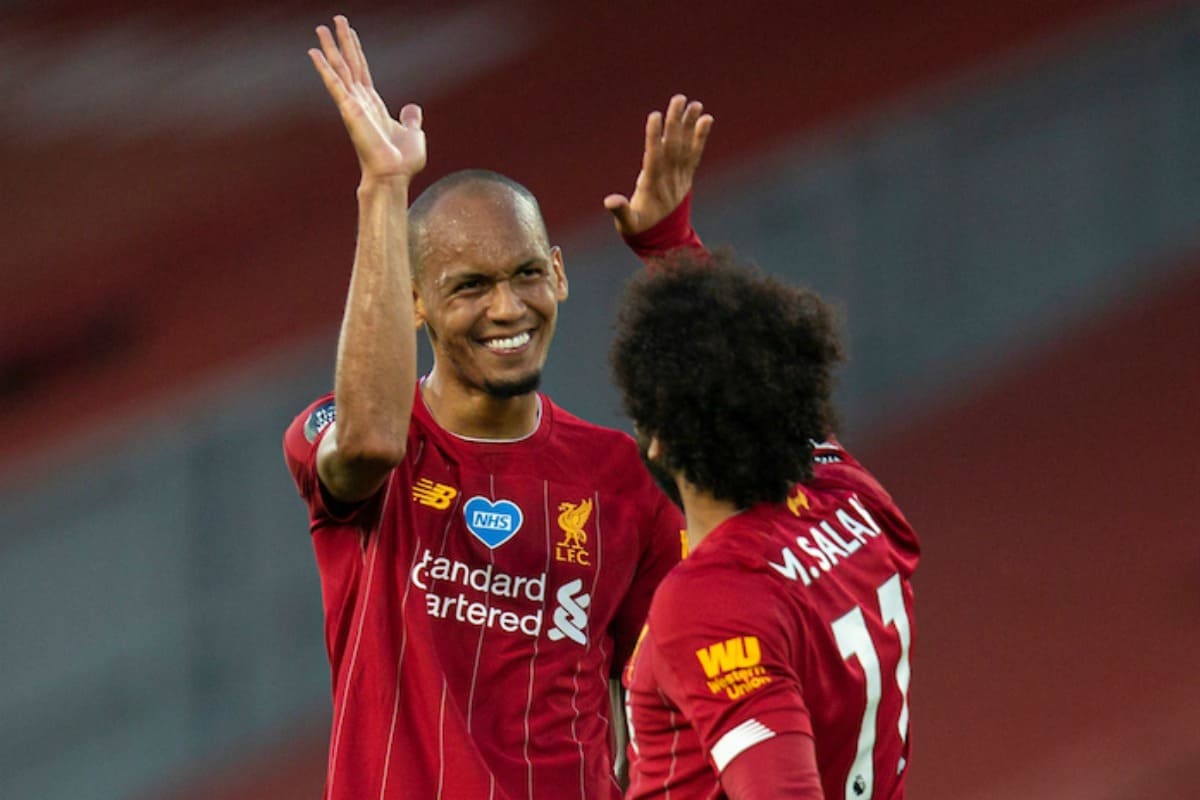 Liverpool struck back from the weekend’s result in emphatic fashion after dispatching Crystal Palace 4-0, and fans were duly delighted as the Reds moved within two points of the title.

Anfield provided the backdrop for Jurgen Klopp’s side as they pushed to move within two points of the title, where they met a Crystal Palace side with a number of familiar faces in Roy Hodgson and Mamadou Sakho.

While the clash against Everton lacked the intensity and forward impetus required, the Reds shot out of the gates in the first and fired a warning to Palace’s defence.

One which Trent Alexander-Arnold made good of as he opened the scoring with a cracking free-kick midway through the first half before Mohamed Salah added a second on his return into the lineup after a pinpoint looped pass from Fabinho.

And the Brazilian added the third in stunning fashion with a thunderous strike to cap off a stupendous individual performance, with Sadio Mane joining the party to make it four – and now all eyes will be on Man City on Thursday night.

Best home performance of the season this. We should just put the flags up every week and go the pub

“Night and day doesn’t describe the difference three days can make. A day on Mercury and a night on Pluto perhaps.”

That Salah run is what we lacked at Goodison, everyone wanted the ball to feet. Whoever plays wide for us needs to be making those runs.

This might be Liverpool's best home performance of the season.

The sort of performance from Liverpool that puts an asterisk against anyone who claims they are not worthy champions.

The Liverpool right side has been flawless. Trent, Henderson, Salah.

30 seconds in and Andrew Robertson is already in shithouse mode. Love him.

Love the synergy between TAA and Salah. One goes in field and the other wide and they keep swapping. Then, they both come infield and Henderson plays wide

approve of Mané coating his boots in superglue before kickoff

Liverpool fielded a full team of right-footed players against Everton. Salah and Robertson have made a big difference here.

That was a fucking STUNNING free kick!!

might have forgotten because pandemic et al, but Trent Alexander-Arnold is still only 21 years ago

YES TRENT! A cracking way to end over three months without a goal to celebrate.

“Brilliant free kick. That’s going to feature in the season’s highlights video.” – epsomred on the forums.

You still have to remind yourself he's only 21. What a glorious free-kick. Whether or not the PFA awards get resurrected this season, there can't be much doubt that Trent Alexander-Arnold has been the campaign's youngest leading light ?

As did Fabinho’s performance and thunderous strike…

Nice to see Fabinho back to his best, not sure what was better, the strike or the sound of the net.

Not sure there's a better noise than a sweetly hit ball rattling against the net. Beautiful strike, and perfectly started with a team press.

Best holding midfielder in the PL by a country mile.

Take a bow Fabinho, take a fucking bow. Breaking it up all game… and then that ball is magnificent for Mo to put it in, great run and finish from Mo too.

Exceptional from Fabinho. Some way to cap off an absolutely faultless performance tonight. Great to see him back to his absolute best.

– iftikhar on the forums.

Fabinho must think he’s playing Barcelona in the second leg of a Champions League semi-final because he’s been absolutely brilliant.

Liverpool are 4-0 up and 23 points clear and still not giving Palace an inch of space or a moment's rest. That's what Klopp – and those players' own professionalism – has built.

When it's mathematically confirmed that #LFC have won the league, I'll be writing long-form tributes for our starting 11 plus the most influential subs.

I'll start with Roberto Firmino. Because everything Liverpool does on the pitch starts with him. Let it be known.

I hope City win tomorrow so we can win the title on a win by us instead of watching someone else capitulate. Isn’t it nice to be able to be picky about *when* we win it?! ?

Did anyone need reminding how good that team is? Four superb goals and 93mins of pure quality. Business as usual for Liverpool, a joy to watch. Fabinho a colossus in the middle, deft little chipped assist for Salah deserves more credit. It’s on the brink. #LFCdigest