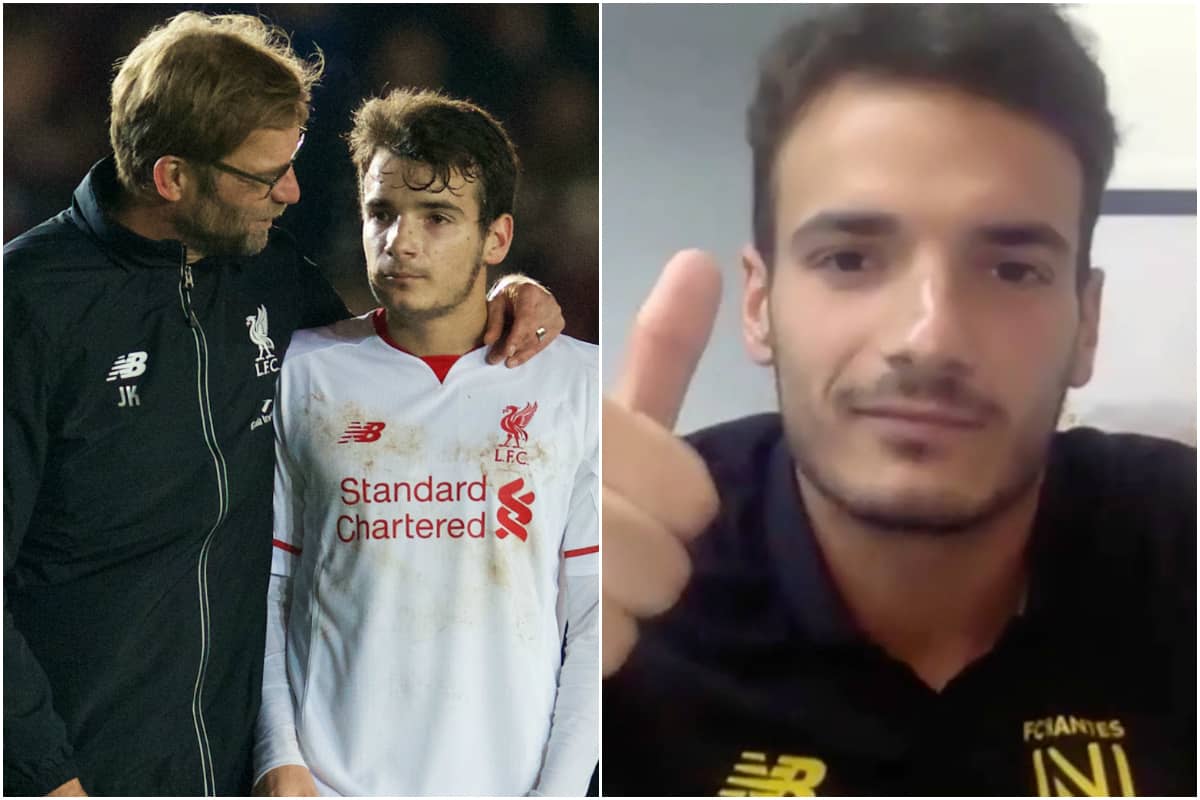 Pedro Chirivella has expressed his gratitude to Jurgen Klopp on leaving Liverpool for Nantes, vowing to “tell my grandkids” about the honour of working with him.

With his contract due to expire at the end of June, Chirivella has agreed a three-year deal with Ligue 1 side Nantes, with the two clubs confirming the switch on Friday.

It marks the end of a seven-year stay on Merseyside for the 23-year-old, who became Liverpool’s longest-serving foreign player following Lucas Leiva‘s move to Lazio in 2017.

Though there is a wistfulness surrounding his exit, having failed to establish himself as a long-term option for Klopp, it is a move that enables Chirivella to kickstart his senior career.

He has already proved he is capable of shining at a top-flight club, having done so with Go Ahead Eagles and Willem II in the Eredivisie, and now he arrives at Nantes boosted by working with “one of the best coaches in the history of football.”

Chirivella praised Klopp as such in a Zoom interview with his new club while he remains in lockdown in Spain, reflecting on his time at Liverpool and the memories he will cherish.

“I only have words of gratefulness. He’s been very great to me, and I can only thank him,” the Spaniard said of Klopp.

“What you see on TV is what he is like in real life.

“I will tell my kids and my grandkids that I was trained by one of the best coaches in the history of football.”

Chirivella played just eight times under Klopp, but trained with the first team on a regular basis in the manager’s first season with the club and, more recently, throughout 2019/20.

He was trusted as the most experienced of Liverpool’s academy talents, but the decision to join Nantes came from a desire to play first-team football week in, week out.

“For me, coming to Nantes, I see it as an opportunity,” he continued.

“Of course, it’s very difficult to play at Liverpool and I needed to play, and when Nantes came with the offer I thought it was the perfect move for me. I am very happy to be here.”

It will clearly be difficult for Chirivella to shake his affinity with the Reds, however, even asking fans to sing You’ll Never Walk Alone for him at Stade de la Beaujoire.

“It would be special if you can sing You’ll Never Walk Alone at the stadium!” he said.

“It’s a special song and after seven years at Liverpool, I feel it really deep inside.”

An increasing rarity in modern football, it is refreshing to hear Chirivella speak so fondly of his former club having not agitated for a move despite a difficult spell at Anfield.

His affection for the club is clear, with much of that stemming from his treatment by Klopp, and Nantes’ No. 5 concluded: “I’m very happy to have played for the best club in England.”