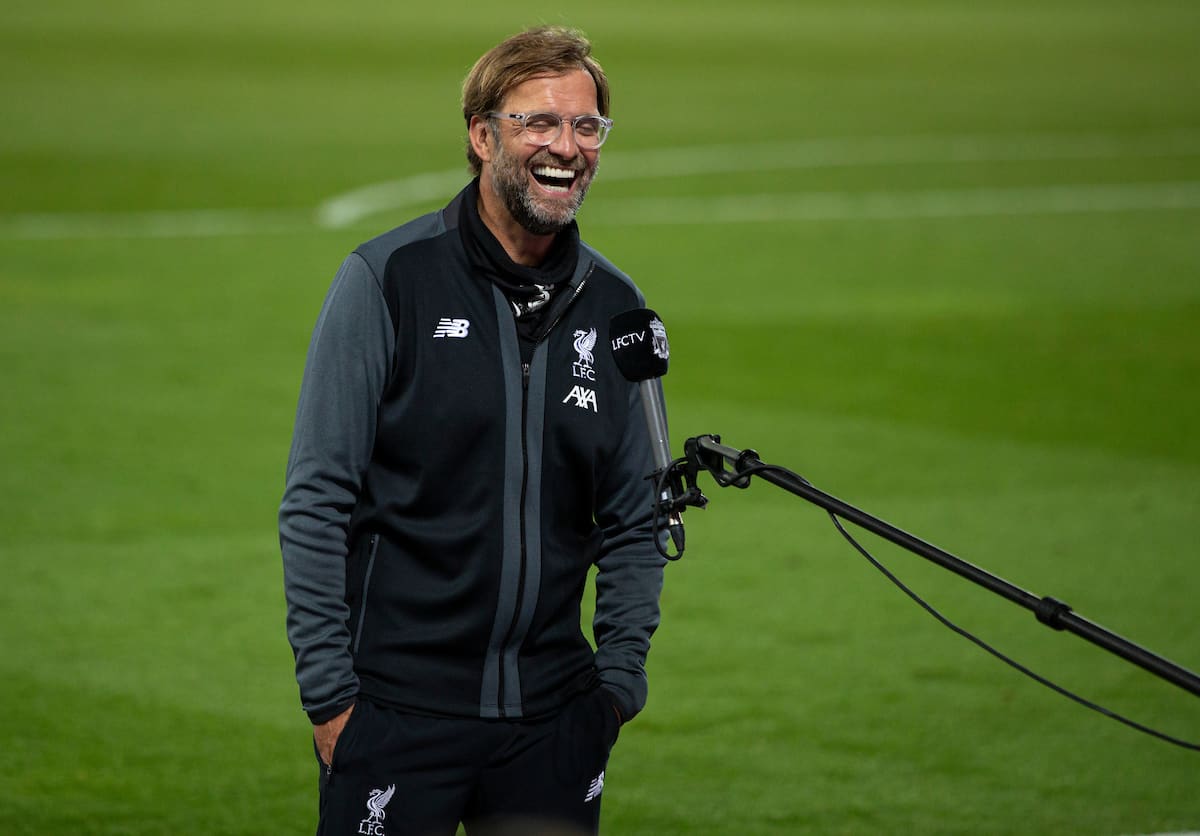 Jurgen Klopp showered his side in praise for their attitude, application and intensity as they put four unanswered goals beyond Crystal Palace.

The Reds were back in full flight at Anfield on Wednesday night as they put the pedal to the metal after blowing off the cobwebs in emphatic fashion to move within two points of the title.

It was arguably one of Liverpool’s best home performances of the season, with Trent Alexander-Arnold, Fabinho, Sadio Mane and Mohamed Salah all finding the net in remarkable fashion – which left the boss’ thoughts to wander to the fans.

But equally, Klopp could not hide his joy at witnessing the “best counter-pressing game I ever saw behind closed doors,” epitomised by a four-strong press on a Palace player late in the clash when the result had already been sealed.

“Imagine how this stadium would’ve been full today and all the people could have experienced it live, that would’ve been amazing,” Klopp told Sky Sports after the clash.

“I don’t think the game would have been better, to be honest, because my boys pushed themselves and the atmosphere on the pitch was incredible.

“I said before when this part of the season started I would like to see some of the best games behind closed doors because I hope we don’t have them that often and it was for sure today the best counter-pressing game I ever saw behind closed doors, it was exceptional.

“The attitude the boys showed today was amazing and I liked it a lot, and the football we played as well. You have to be calm, you need an opener and that was obviously the free-kick from Trent – that helped us.

“Crystal Palace didn’t change their approach but we felt more free. We really tried hard from the coaches to tell the boys actually how good the Everton game was a part from the last third, which was not brilliant obviously.

“From my point of view, it was important that we told them because the expectations everybody has of us are really big and we have our own expectations which are really massive as well.

“This today was a reaction and I liked it a lot, I liked it so much. We are 4-0 up and in the 87th minutes four players chasing one poor Crystal Palace player like it’s the only ball in the world – that was really really good.”

“It was important that we showed our supporters that we are still here and we don’t want to wait, we want to be active, we want to change the things for better.”

And with just two points now separating Liverpool from clinching the title, thoughts inevitably were cast towards Man City’s clash against Chelsea on Thursday night where anything other than a win for Pep Guardiola’s side would see the Reds crowned as champions.

The City boss had hinted at making a number of changes which left Klopp suggesting “he should play poker”, but the boss was coy on whether he would be tuning in.

“I don’t know if I’ll watch it. The last one I watched until it was 3-0 and I thought that’s now really a waste of time,” Klopp said. “They are brilliant, we know that. I couldn’t respect them more.”

“We probably celebrate different things on the pitch, I can’t stand when I see a good counter-pressing situation, it’s really difficult to put myself together – and Pep likes other things.”