Liverpool have come a long way since the “lonely” night against Crystal Palace in 2015, an encounter which provides the perfect reference point for Jurgen Klopp’s side.

The Reds welcome the Eagles to Anfield on Wednesday off the back of five successive victories over their counterparts – but the record did not always make for good reading.

At that time, the Reds lacked belief and conviction both on the pitch and in the stands and after fans streamed out of Anfield the boss’ words spread far and wide: “I felt pretty alone.”

It was Klopp’s first defeat as Liverpool manager and while the stadium will be empty for reasons beyond his control this season, the defeat against Palace now acts as an ideal check point for how far the team has come in the years since, as a win over Roy Hodgson’s side would move the Reds to within two points of the Premier League title.

“On that day I felt literally alone because so many people left the stadium and I thought it was important to make a statement that things had to change. We had to change and supporters could change as well, if they wanted to help,” Klopp explained. 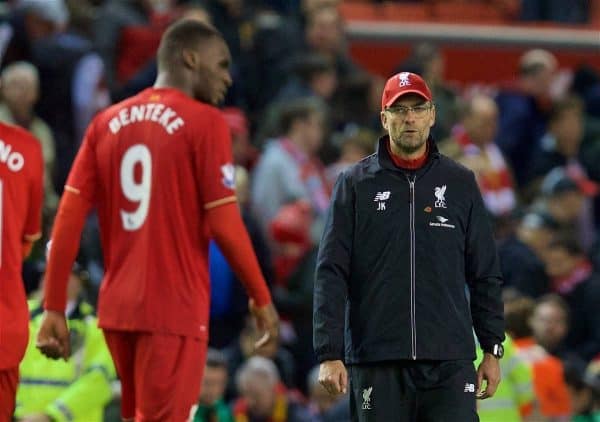 “We had to change and supporters could change as well if they wanted to help. I’ve never felt alone again since then, honestly, and I will not feel alone when something special will happen, whenever it will happen.

From the matchday squad on that day in 2015, only Nathaniel Clyne, Adam Lallana, Dejan Lovren, Divock Origi and Roberto Firmino remain – with the latter the only staple in Klopp’s side.

The transformation that has since taken place is one which has catapulted the club back where it belongs, but the change in mood has proven just as instrumental as the change in personnel.

Klopp added: “We didn’t have a massive masterplan behind it and think ‘We have to sell him, him and him and bring in him, him and him’. Not that night, for sure. It was a cold night against Palace, I remember that, but I don’t know too much about that time any more.

“The only thing I know is that the team we had at the time was the basis for what we have now.

“They created the mood that we could build on, even if the mood was not that good in the moment. We had to use the fact that people wanted to change things. If people don’t want to change and think everything is fine because a new manager is coming then nobody is bothered.

“The situation was our starting point and losing to Crystal Palace that night maybe helped more because I could make this kind of statement after the game. It was not planned, it was just what I felt in the moment, and it helped us to come closer together because people discussed the influence of supporters in the stadium that night.

“They had to think about it and thought, ‘OK, we are not just there for the start and for 80 minutes of the game, the team needs us for 95 or 100 minutes or however long it will go’. That was important.

“A lot of things have changed. I couldn’t tell you how many players, but the team at that time was not so bad and the team now is a pretty good one. A lot of things we did in the past obviously worked out and may that continue forever! That would be really cool.”

The defeat in 2015 against Palace was not the only decisive moment in altering Liverpool’s trajectory, however, as the 2-1 league defeat in April 2017 was the last at Anfield – where the unbeaten streak now stretches 55 games and 38 months.