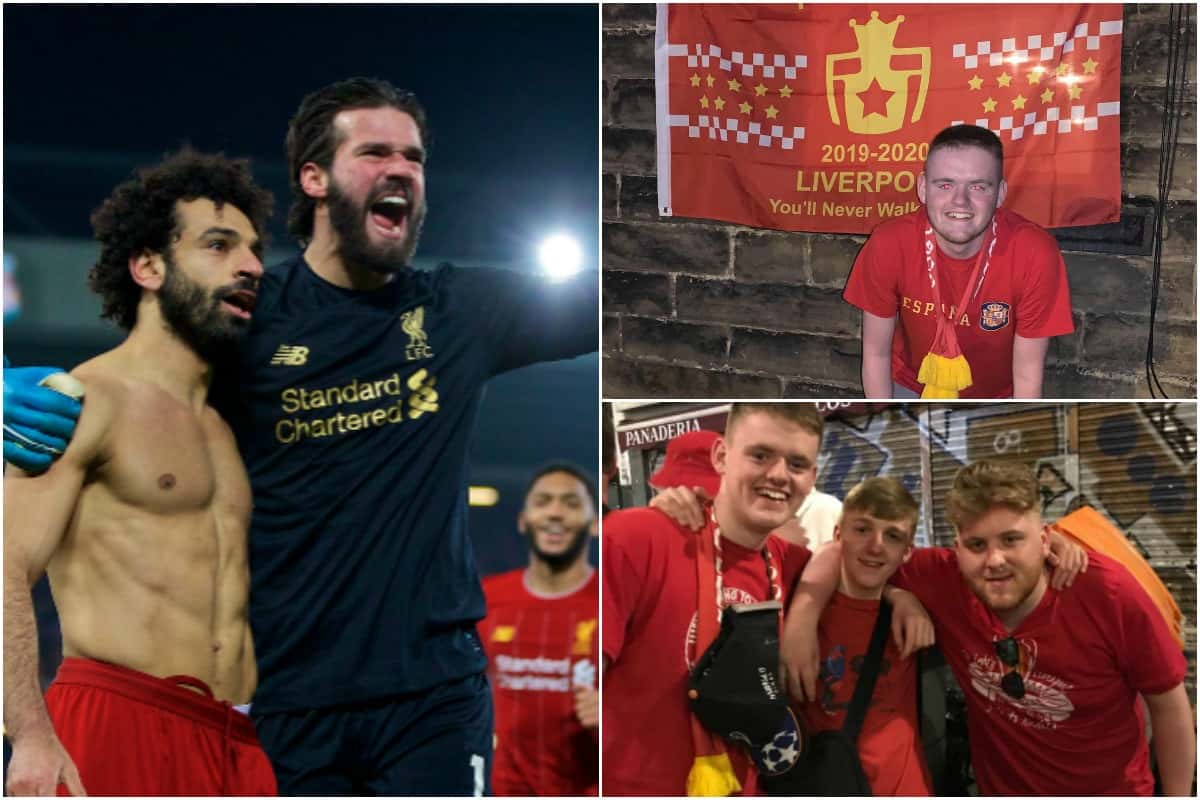 January 19, 2020. That was the day. The day some of us really did start to believe that Liverpool FC would win the league.

As Mo Salah ran half the length of the pitch to slot home in front of the Kop, to send Liverpool SIXTEEN points clear and all but secure the clubs first top-flight title since 1990.

Anfield was euphoric. It was all done, but no one dared admit it.

Like so many, I’ve known for months the title drought was coming to an end, Liverpool would be champions of England once again. Jordan Henderson would join an illustrious list of title-winning captains; Alan Hansen, Graeme Souness, Phil Thompson – and soon Henderson would find his name permanently fixed among those who conquered before him.

'We're gonna win the league' rings out from The Kop for the first time this season.

This title has been so elusive that a whole generation of supporters had yet to see Liverpool rule English football, they still relied on those stories from dads and grandads. 30 years of near misses, slip-ups (literally) and heartbreaks, would soon be over. This generation would soon have their own tales to tell.

From Sadio Mane‘s late winner at Villa to Trent’s stunner on Boxing Day, this team has run away with it. They are deservedly history makers, they have rewritten the history books. This squad gave us more than a single moment of jubilation, they’ve given us weeks and months of celebrations. No matter how you’ve spent the season, with mates from the match, the coaches or with family, everyone has their own personal narrative this season, their own story to relay in years to come.

As I’m sitting here now, with a bottle of champagne in my company, every scroll on Twitter brings something new, another interview, more scenes from Formby hall or even just highlights for the title-winning season. I’ve tried a couple of times since Thursday night to try to write something that would fractionally sum my feelings up from a lifetime’s wait, into something I could share.

I don’t think any combination of vocabulary will be able to comprehend the emotion of Thursday night.

Being 20-years-old, like many I’ve yet to see Liverpool be officially be crowned the greatest team in England. For so many it became the holy grail and the one that would complete the set, but in years gone by it has sometimes felt further away than ever before.

Brendan Rodgers’ quest for immortality in 2014 felt very much like a house built on sand. There were no solid foundations set, it was nothing more than another false dawn.

It has felt like the last few years have been building up to this moment, I was fortunate enough to be in the ground to see Jordan Henderson lift the European Cup last summer, I was adamant that nothing would ever get close to that night.

The first sizable trophy that those of my age were able to fully be a part of and celebrate and Liverpool’s affinity with the competition made it that even sweeter, this league title triumph might have just surpassed it. For someone who only missed four league games all season, the journey was beyond my wildest dreams.

But that’s only marginal compared to some, there are many who have spent decades on decades travelling the lengths of Europe to have this moment, many more years than I’ve even spent on this earth, following this club in its quest to return to its perch it once ran English football from.

I often used to wonder if I would ever see us compete for the biggest honours again – would we ever reach the heights set by Bill Shankly and Bob Paisley’s all-conquering sides?

It was inevitable we would, that’s the way football works, every team has its cycle and through evolution Liverpool have had their new dawn, at last.

Sometimes though it’s easy to lose hope or focus, sometimes quitting is always the easier option, Sometimes there is never a clear path in sight. That’s what it looked like just over 5 years ago, when Liverpool lost 6-1 to Stoke City. The same Stoke that currently lay 20th in England’s second division. 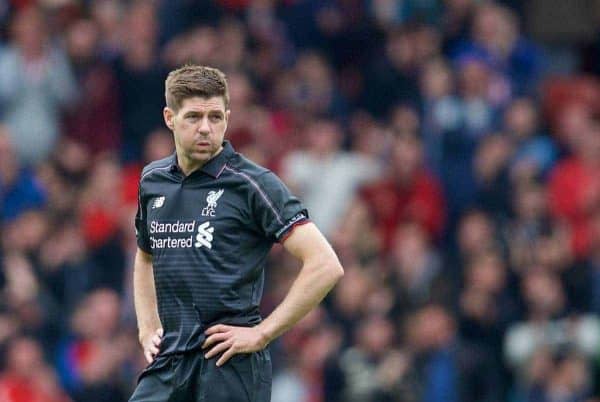 The story since then that has been transcribed by Jurgen Klopp has been nothing short of poetic.

But never did I think at the age of 20 I would’ve seen it all, being there for nearly every step of this season’s journey was something I’ll bore my grandkids with for eternity. It’s been nothing but a pleasure and an honour to watch this magnificent and historic side and be part of their coronation.

For context, I don’t come from a footballing family at all; there are no stories of sitting on the old-fashioned terraces, no traditions that have been passed down. I’ve simply made my own journey, but it’s been shaped by those closest to me.

My mum was a single parent who gave me and my brother so many great opportunities and backed everything we wanted to do. Football was one of them, it meant everything to me and my brother as young kids, and my mum tried to adopt it, even going as far back to grassroots football. 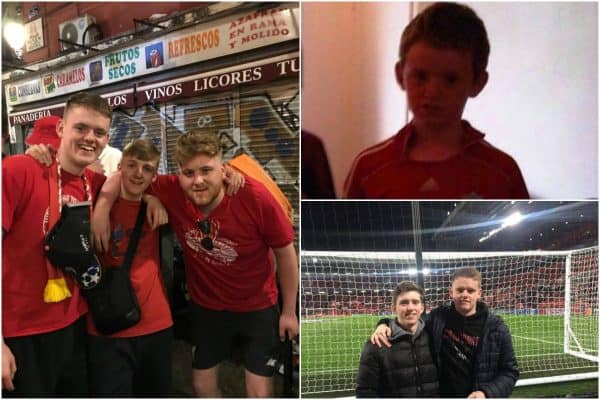 Naturally my inclination was always to copy the routes my brother took and I’m sure many with siblings out there can relate, even more relatable is the growing up to arguments and fights, but there is always something that brings siblings close, football is ours. We have been lucky enough to share some really cool moments watching Liverpool together in recent years.

Back to mum. I could name you many things my mum would rather do than watch a football match on the tele, you’ll catch her watching or rather keeping one eye on the matches if Liverpool are on, and she’ll always try to text me after every game, if she can find the score online!

I think she would call herself an adopted football fan, not someone who necessarily enjoys the game itself but gripped by the emotion of it all and the stories, the human side of football.

The stories of Klopp and his football romance, Henderson’s story that started as a baby faced young man on Merseyside just under ten years ago, the same story was nearly cut short before it even had a chance to flourish, but the final chapters of his Liverpool chronicle will end with his name entering the history books. The romance of football captivates her.

And this is where she comes into my journey.

As going to the match wasn’t part of my early childhood, my first Liverpool game came at the age of 13 years old. My mum and I together at Anfield for the first time, a place in Anfield and a city in Liverpool that would become a home away from home, it was our thing together for the many years that we made the drive up to Anfield, before I started my own narrative. 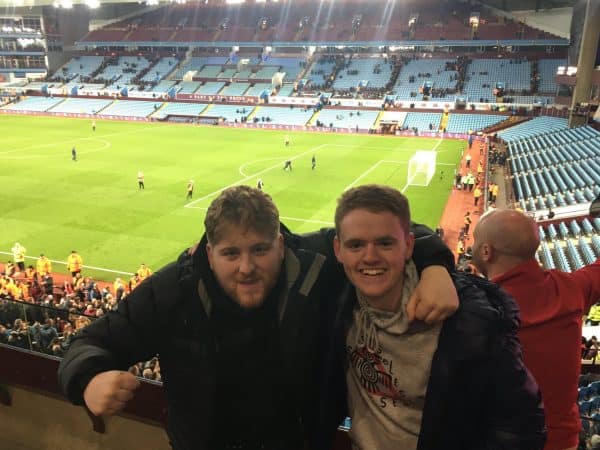 I haven’t been able to watch and experience many big games or finals alongside her, but many cold nights were spent together at Anfield during the 2016 Europa League campaign. We watched the Champions League final in 2018, spending the day in Liverpool, yet again, we all know how that night ended.

I would’ve loved nothing more than to celebrate something as compelling with my mum and my brother, it would have meant the world to me.

Twelve months on, as Liverpool made it six, I was able to involve my mum in the moment, Facetiming her after making my way back into Madrid’s city centre last summer and the first embrace as I landed back home after my week-long stay in Madrid.

That was what I always thought would be the closest I would get to sharing a moment.

As lucky as I was to be travelling around Europe and the country following these lads, it always saddened me that I couldn’t celebrate it with the two people who were there from the very start of my journey.

During the weeks and months and ongoing talk surrounding the pandemic and how this season would be decided, from the start we knew we weren’t going to be in the ground if football did resume. Part of me felt like it had been taken away and the shine had been taken off it. In short terms, I don’t think I could have been any more wrong. 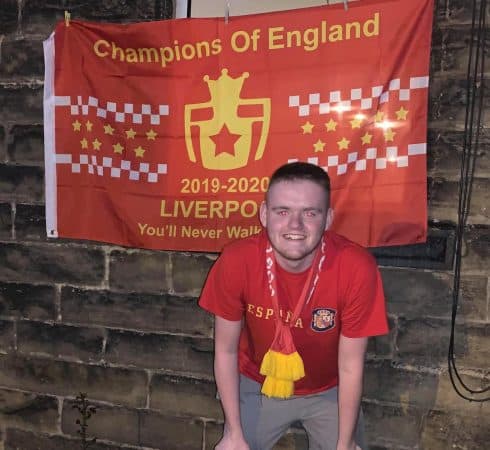 In normal circumstances I wouldn’t have been able to be with either of them on such a significant night. However Liverpool would have won it before the pandemic, whether that be at Goodison Park or at Anfield or at a bar in Liverpool, my mum wouldn’t have been there.

I have celebrated with my mates this season at Anfield. We’ve all created great memories and stories, but nothing beats family. To be able to share it with those closest to me was the next best alternative, as the saying goes every cloud has a silver lining.

There have been so many heart-warming stories come from the title campaign, dads finally able to celebrate it with their sons and daughter, some experiencing this feeling for the first time. Some for the last. This was everyone, whether you go every week, or listen on the radio.

So as the final whistle blew at Stamford Bridge on Thursday evening and Liverpool were champions, there I was in the company of my brother and mum.

Two people who have influenced my journey more than they will ever realise. Two people who knew how much it meant to me, as the tears flooded down my face. There wasn’t anywhere else I would’ve preferred to have been at that moment.

It was a night I’ll never ever forget. A season I’ll never forget, fighting for the one title that meant so much to us all. The title was a collective effort, for everyone over the last generation.

For those who couldn’t be there to see Liverpool’s title, for those who we have lost along the way. This was for them.

So wherever or however you chose to celebrate it, we are all in this together, and this may be the first. But it certainly won’t be the last under this great manager.