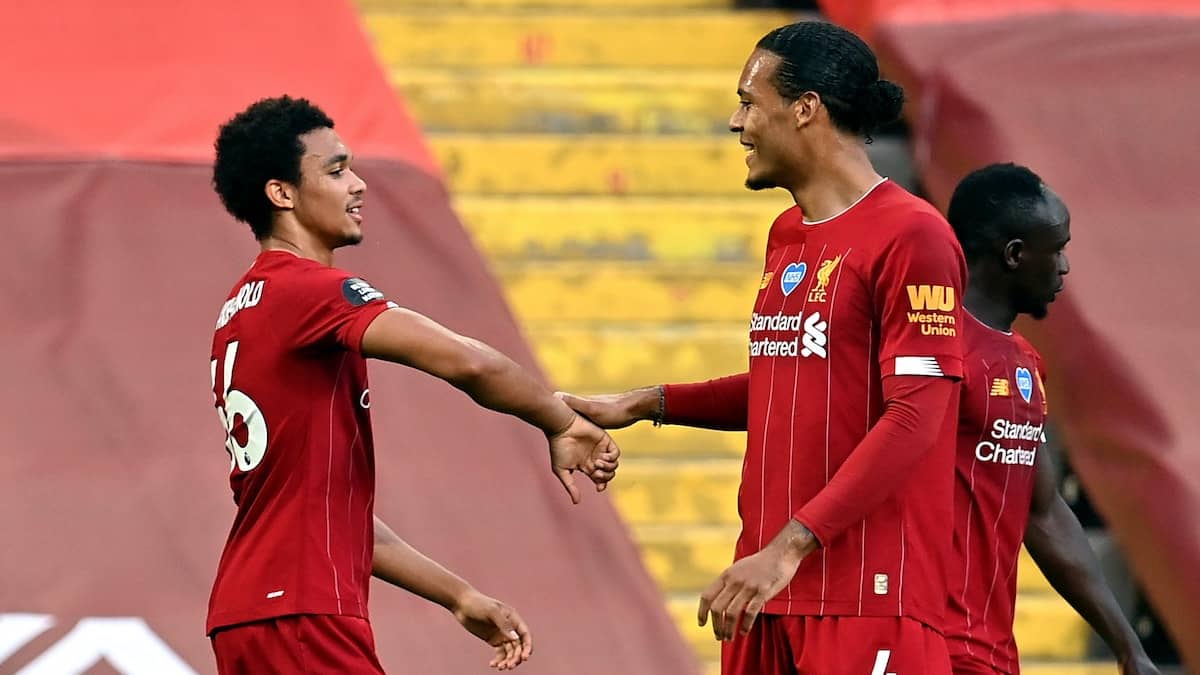 There was a feeling of anticipation in the air as Liverpool players celebrated their 4-0 win over Crystal Palace, with just two points separating them from the holy grail.

The Reds were back to their barnstorming best on Wednesday evening as they dispatched Roy Hodgson’s men to the tune of 4-0.

The Premier League champions in waiting had dusted off the cobwebs with four perfectly taken strikes, each one edging Jurgen Klopp‘s side closer to the end goal.

It was a performance which more than made up for the lacklustre affair at Goodison Park over the weekend as they left Crystal Palace with no time to search for answers to stop the onslaught.

All eyes will now be cast towards Man City‘s clash against Chelsea on Thursday as any dropped points will see Liverpool crowned Premier League champions, but the man who opened the scoring with a pinpoint free-kick preferred to look back at what was a “world-class performance.”

Trent Alexander-Arnold, when speaking to LFCTV, was bursting with pride as the Reds sent out “a little bit of a statement” for how it’s done behind closed doors:

“One of our best [performances] of the season by far. As a team, and the manager and fans we’ll all be over the moon with that. I think we put in a world-class performance.

“There’s something to be proud of coming here after such a long time and without the fans, it was different but we put in a performance to be proud of.

“We’ve probably sent a little bit of a statement in terms of the quality of performance behind closed doors, it was probably one of the best that people have ever seen.

“We spoke before the game that they’d won four on the bounce before and after the lockdown so they were in good form coming in today and we knew it was going to be difficult, but as a team, we showed the quality we’ve got.”

And the right-back also had words for his deputy, Neco Williams, after the 19-year-old made his league bow by replacing him with 16 minutes left in the game.

Williams has left an impression on his teammate for his “eagerness to learn” and his debut ensured Trent was “over the moon” with how he earned his spot and then applied himself on the night:

“An eagerness to learn and improve every single day. You can see him improving, picking up little things every day, likewise with all the young lads and there’s no better place for young players to be than at Liverpool to be given the chances that they’re given like today.

“I was over the moon with how he’s performed, likewise with Harvey when he came on as well. They’ve shown the quality and shown that when the gaffer is ready they’ll be given the chance and they deserve the chance as well.”

And after the game, Williams was quick to take to Instagram to share his excitement of having made his first top-flight appearance for the club he has played for since the under nine level:

Buzzing to have made my premier league debut tonight????but more importantly to get the 3pts lads were class again !!

The rest of the team followed suit in sharing their joy at a result which moves them to within two points of the title.

For Virgil van Dijk, Jordan Henderson and the hashtag king James Milner, it was a “complete performance” which deserved to be lauded:

Joe Gomez returned to starting lineup after being named to start on the bench in the first game back and acknowledged it was “nice to be home” but that he felt the absence of the “Anfield atmosphere”:

Big team performance & 3 points with some special goals… Missed the Anfield atmosphere, but nice to be home ??? #LFC

It was a case of eyes on the prize for Harvey Elliott and Trent as they nodded to Liverpool moving “even closer”:

And finally, Gini Wijnaldum and Andy Robertson welcomed “4 goals and a clean sheet” which notched Liverpool’s 28th win of the Premier League season:

Huge performance from us today. One step closer. We missed the fans but that one was for you #YNWA

The emphatic victory moved the Reds to 86 points, 23 ahead of Man City prior to their clash against Chelsea on Thursday – which could see Klopp’s men seal the title without kicking another ball.

But should City not drop points, Liverpool will have the chance to win it themselves when they meet Pep Guardiola’s side on July 2.

What a time to be a Red.