The Premier League are already in talks with the government regarding the safe return of fans to stadiums for the 2020/21 campaign, as plans for the top flight move forward.

Wednesday will mark the return of the Premier League as Aston Villa host Sheffield United and Arsenal take on Man City, with Liverpool back in action on Sunday in the Merseyside derby.

All games between now and the end of the season will be played behind closed doors, with the 20 clubs voting in measures that will limit the amount of people in a stadium on matchdays to around 300.

This is likely to continue into the start of next term, though according to the Mirror, discussions are underway over allowing supporters back into games.

These talks have been between the Premier League, the UK government and medical experts, and follow hopes in Spain that “10 or 15 percent” capacity could be filled for LaLiga games before the end of 2019/20.

“Of course it won’t be the entire stadium and there will be special precautionary measures,” LaLiga president Javier Tebas explained.

“If we can have even 10 percent or 15 percent by the end of the season, if that happens we will be very happy about that because that’s a sign that we are getting back to some form of normality.”

The UK remains behind Spain in terms of a decrease in infection rates, but the Mirror‘s Andy Dunn suggests there could be “some sort of crowd for the FA Cup final on August 1.”

He notes that the decision would be “entirely dependent on government permission and on the smooth restart of the Premier League.” 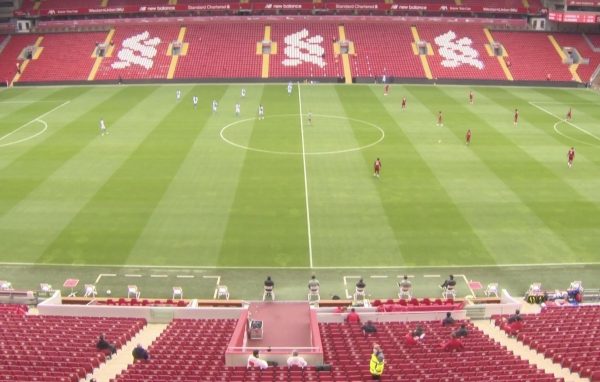 So far, there have been few positive tests among players and staff from the 20 clubs, with just one new case from the last 1,213 tests taken.

And if the Premier League‘s restart is as successful as in Germany with the Bundesliga and 2.Bundesliga, this should serve as encouragement for the return of a semblance of normalcy.

Hypothetically, allowing 15 percent of fans into Anfield towards the start of 2020/21 could see around 8,100 in attendance, which is a fraction of the sell-out crowds Liverpool are accustomed to, but certainly a step in the right direction.

This would fill effectively fill the Anfield Road end, which is now not set for redevelopment work until next summer.