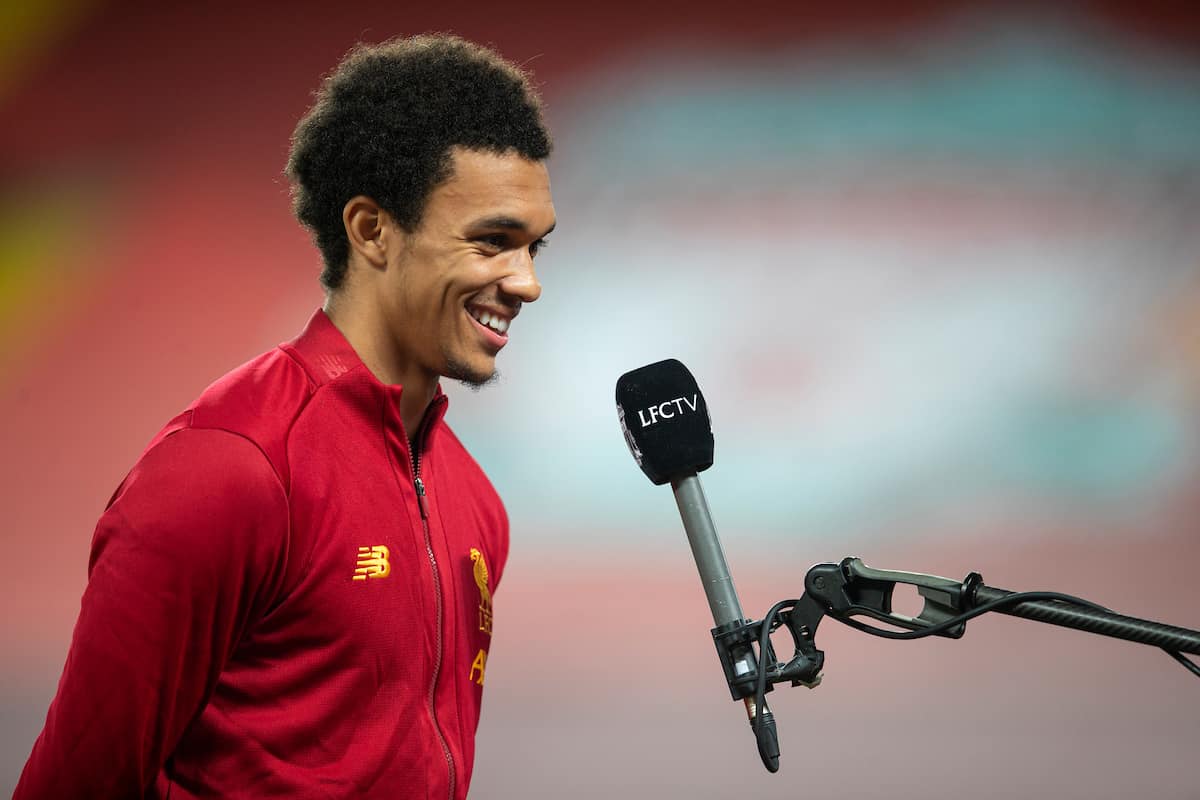 Liverpool full-back Trent Alexander-Arnold hailed a “massive win” as the Premier League champions-elect moved to the brink of clinching the title.

A first championship in 30 years is almost in their grasp after Mo Salah, Sadio Mane, Alexander-Arnold and Fabinho tore Crystal Palace apart in a one-sided 4-0 victory at Anfield, three days after a goalless Merseyside derby.

“It’s been a difficult game for us, it was obviously quite disappointing to only get the draw on Sunday on our first game back.

“It’s great to be back at Anfield after what has gone on. It couldn’t have gone any better for us, so we’re made up with the win.”

The full-back felt his stunning free-kick made amends for missed opportunities against Merseyside rivals Everton.

“I’ve been practising a lot,” he added. “I had a few chances against Everton that I was disappointed not to score with, but I got the chance today and I was able to put it away.

“It was good to get the ball rolling for the lads and we kicked on from there.”

Alexander-Arnold was hesitant to begin celebrating Liverpool’s first Premier League title win since 1990, but said: “It’s two points so it’s close. A lot can happen in the Premier League but we’re close.”

Liverpool boss Jurgen Klopp’s only regret was that no fans could witness the win inside Anfield.

“I don’t think the game would have been better to be honest, because my boys played like everybody was in the stadium. They were pushing themselves.

“The atmosphere on the pitch was incredible. I said before, as this part of the season started, that I would like to see some of the best games behind closed doors, ever, because I hope it doesn’t happen often.

“That was the best counter-pressing game I have ever seen behind closed doors. The attitude the boys showed was amazing. I liked it, a lot.”

Salah believed the squad were motivated not only by their imminent title victory, but also by the desire to play entertaining football for the fans who cannot attend.

“Two points to go and win the league, it’s great,” he said.

“We had a great performance today and I’m happy with the result and looking forward to the next games.

“All the players are motivated. The team are motivated to win the league and play the best sport behind closed doors.”

“We’ve waited a long time for this and we’ve worked hard for this over the last few years as a team.

“As a club this is what we’ve dreamed of and we’re in a good position, so hopefully we’ll be able to get it across the line very soon.”