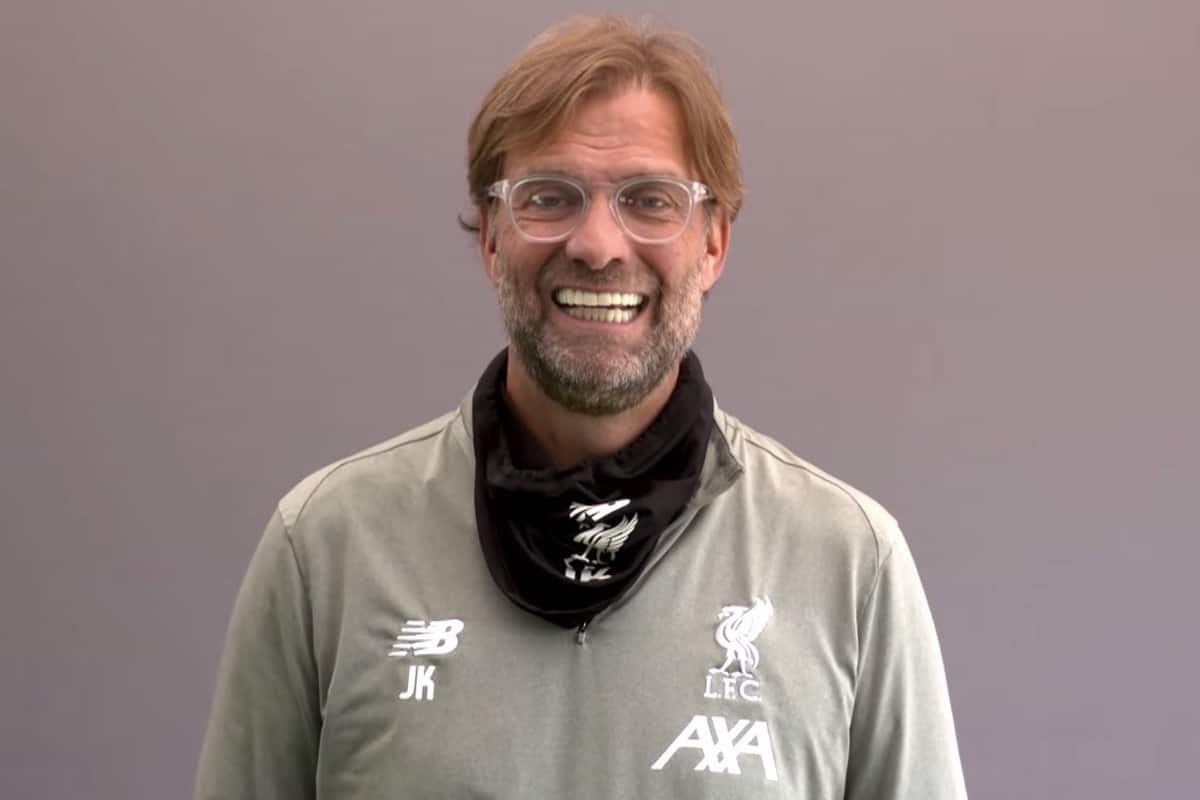 Jurgen Klopp has expressed his excitement on football’s return this week, but has urged Liverpool supporters to stay at home as the Premier League gets underway.

The Reds are back in action on Sunday night for the Merseyside derby, four days after the big restart as Aston Villa take on Sheffield United and Man City host Arsenal.

Defeat for City at the Etihad would ensure a victory at Goodison Park would be enough for Liverpool to seal the title, which Klopp has described as “our massively big target.”

But for Liverpool to do so, they will need to do so safely, and as part of a campaign to remind fans to stay at home and not visit stadiums while games are underway, the manager has delivered a strong message.

“Football is back! It will be, obviously for some reasons, completely different. But you can still make it really, really special,” he explained in a three-minute address.

“Let’s go a little bit back a few months, when we all became aware of the really special problem we will have from now, all together in the same moment, the whole world.

“That was the moment that we all realised that obviously football is not as important as we thought the night before, when we played against Atletico.

“I think that’s a good lesson to learn, to be honest, and it was an important lesson. Not for me, not for you especially, because we all knew that.

“We have our own problems, we have family, health was always above all the other things, especially the health of our loved ones.

“There were times when we didn’t know exactly if we will play again this season, there were rumours about null and void, points per game and all that stuff.

“Now we stand here and in a couple of days the league will start again, because we behaved really responsibly, we showed responsibility.

“And we did the things we had to do, because we wanted to save our loved ones and all the others as well.

“So here’s the point: the league starts again, which is great. So we can play again, and we can go for our massively big target again.

“And for this, we need you. We always needed you. All the things are only really special because of you.

“We’ve had, now, a few sessions and games, internal games and one against Blackburn in our stadium, and the biggest difference was before the game, You’ll Never Walk Alone, without you.

“It’s still a wonderful song, it’s still great to hear, but without you, it’s not even five percent.

“But that’s how we have to take it in the moment, there will be a moment when the whole 300, 400 million choir can sing it, and that’s the moment we’re all waiting for.

“But until then, we still play football, and I said at the beginning it will be completely different.

“But it’s still football, and it’s still for you. So that means we’ll be in the stadium, you will be at home.

“But the final message: stay safe, support us from home. We are still with you, and you will never walk alone.”