Jurgen Klopp has been awarded the LMA Manager of the Year trophy after a season of fantastic success with Liverpool in the Premier League.

There really couldn’t have been much doubt about it, with many fellow top-flight bosses queueing up to praise the German in recent weeks after the Reds steamrollered the competition.

A handful of other bosses deserve acclaim, of course—Chris Wilder with Sheffield United’s debut season in the top flight, Ralph Hasenhuttl’s resurgence with Southampton—but none, in truth, come anywhere close to what Klopp achieved with the Reds.

That has resulted in him winning the Manager of the Year award—the Sir Alex Ferguson trophy, as it is also known—only the second Reds boss to earn the title, after Brendan Rodgers in 2013/14.

The award is voted for by managers throughout the four professional leagues and there is only one winner, which can come from any of the divisions—showcasing the esteem in which Klopp’s job this year is held by his colleagues around the game. 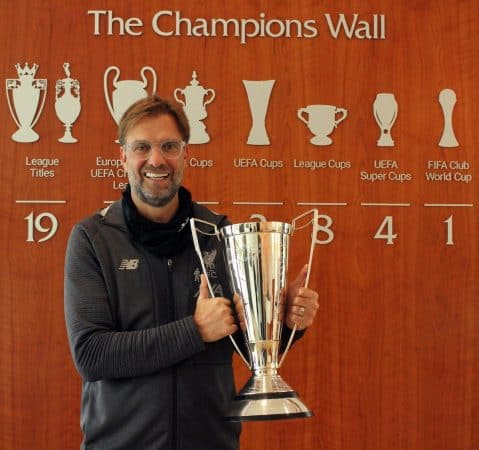 Ferguson sent a message to Klopp upon presenting the award, hailing his achievement in ending Liverpool’s long wait for the Premier League title—and revealing that the boss called him in the early hours of the morning on the night the Reds secured the league!

Jurgen, fantastic. 30 years since winning that league – incredible and thoroughly deserved, the performance level of your team was outstanding. Your personality went right through the whole club and it was a marvellous performance.

I’ll forgive you for waking me up at half past three in the morning to tell me you’d won the league!

Thank you! But anyway you thoroughly deserve it, well done.

Jurgen Klopp woke Sir Alex Ferguson up at 3.30 am to tell him Liverpool had won the Premier League ???pic.twitter.com/Pxx1PHfcOk

Klopp guided the Reds to a 99-point season, which concluded with a 3-1 win at Newcastle on Sunday.

After the Anfield celebrations of last week, we’re all now looking forward to what Klopp has in line for us next year—hopefully concluding in another early morning wake-up call for Fergie!