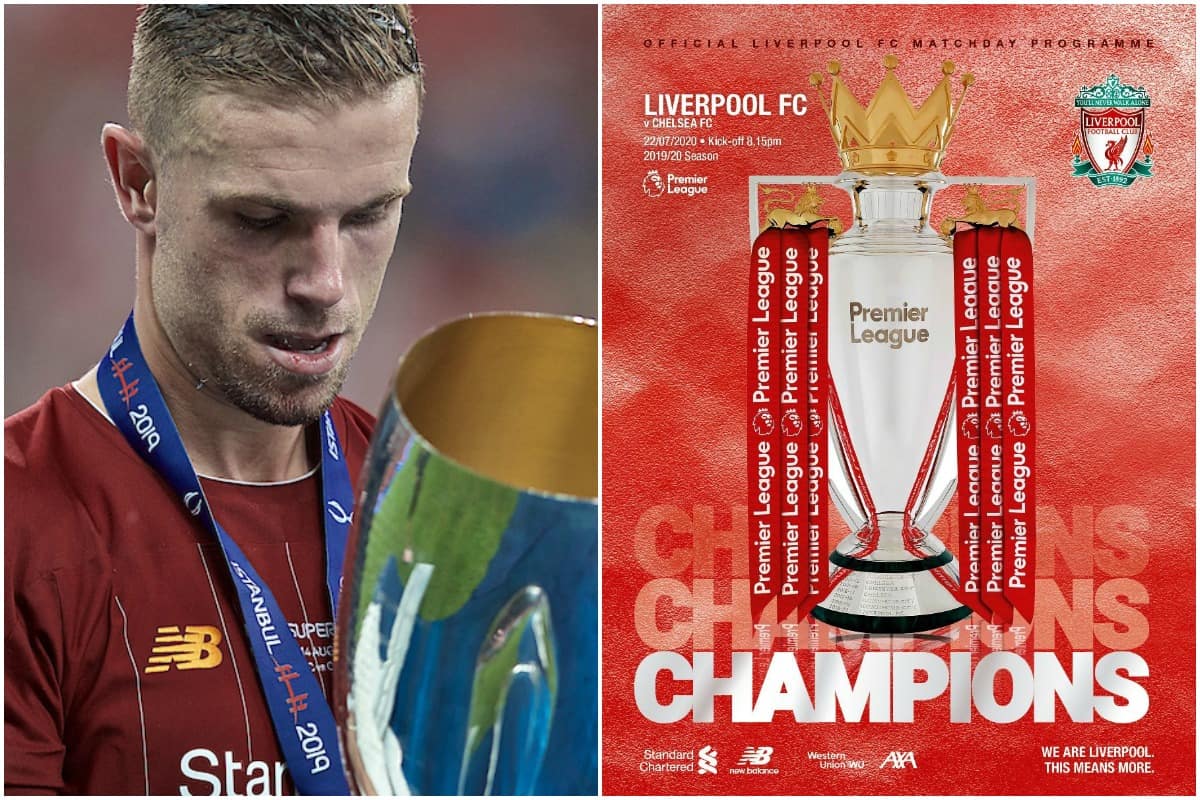 Liverpool meet Chelsea in the penultimate clash of their Premier League season, on a night where the trophy will be hoisted into the air by Jordan Henderson.

The day has finally arrived. Dreams will turn into reality as Jordan Henderson gives the Premier League trophy the shuffle treatment, but first, there is a game to play.

Liverpool have been inconsistent at best since being crowned champions in terms of both performances and results, with their latest outing at Arsenal consigning Jurgen Klopp‘s men to their fifth defeat in their last seven away games.

Now, their undefeated streak at Anfield, which stands at 58, is on the line in addition to ending the season with a joint-record of the most home wins in a single campaign (18).

And Frank Lampard’s Chelsea are the last team to visit the home of the champions, a team the Reds have met three times already this season.

Klopp’s side emerged victorious over Chelsea in both the UEFA Super Cup and Premier League meetings but fell to a 2-0 defeat in the FA Cup in March, a competition where the Blues have now secured their place in the final.

A tough battle is sure to ensue on Wednesday evening as Chelsea look to cement their place in the top four, while Liverpool looks to pick up another win to take into the Premier League trophy presentation on the Kop.

But any way you look at it, it is to be a historic and emotional night for Liverpool Football Club, so soak up every single moment you can as the team celebrate their remarkable season.

The boss has few injuries to consider in the penultimate game with Joel Matip and Henderson already ruled out with a foot and knee injury respectively.

But be rest assured, the captain will be there to lift the trophy in style.

James Milner, meanwhile, had been marked for a return against Chelsea prior to the trip to Arsenal last time out having continued to battle a minor muscle issue.

The 34-year-old has played just 10 minutes, against Burnley, since sustaining a hamstring injury against Everton on restart day and is expected to return to the fold at Anfield on Wednesday.

With a seven-day break between games, Klopp could once again look to field his strongest possible side, with Naby Keita the most likely inclusion in place of Alex Oxlade-Chamberlain.

And Curtis Jones will be hoping to see some minutes to pick up his fifth, and medal securing, appearance in the top-flight.

Chelsea, on the other hand, are to be without Billy Gilmour (knee), while N’Golo Kante remains a major doubt with a hamstring injury.

This game will offer Liverpool the chance to complete the Premier League double over Chelsea for the first time since 2011/12, and only the third time since the competition’s inception in 1992.

The only other time the Reds have completed the double over the Blues was in 2008/09 when Liverpool won 1-0 at Stamford Bridge and 2-0 at Anfield.

And recent history makes for a good omen as the club have not lost a league game to Chelsea since 2014, and few would say no to a similar result in this fixture last season which saw Mohamed Salah dispatch a worldie at the Kop-end.

Will the Reds end their home campaign on a high and take that good feeling into the trophy lift?

Speaking in his pre-match press conference, Klopp sent a message to the fans and touched on the special emotions and the unique situation Liverpool find themselves in:

“This is the absolute challenge, being champions and playing these teams who fight for so much. I expect a good game from us and, unfortunately, from Chelsea as well.

“In the end, you can only win when we are at 100 percent and we will see if that’s possible tomorrow night, but we have to go for something too.

“There’s a really important football game before it but I can’t and do not want to ignore that there will be a trophy lift tomorrow night.

“The boys worked very hard for it, everybody at the club worked hard, and it should be as good as possible. I will be in the best spirits. On a professional basis, it’s one of the biggest and greatest days of my life, to finally get our hands on this trophy.” 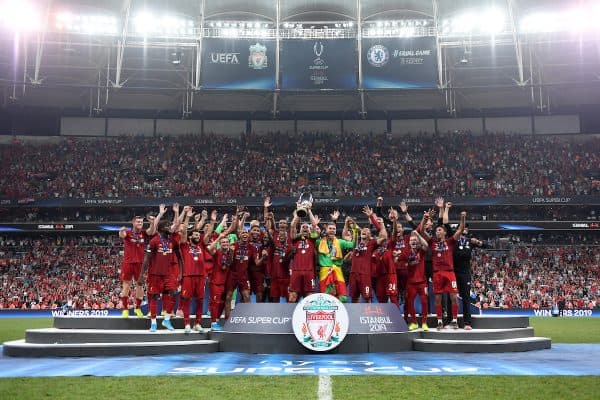 The emotions are already running high for the presentation of the trophy which is expected to be around 10.30pm (BST), following the conclusion of the game.

Seats have been taken from the Kop to make space for a specially designed podium where the players will assemble after receiving their winners’ medals from Sir Kenny Dalglish, of which there are 40 to hand out and 23 players have already qualified to receive one.

The trophy will then be presented to Henderson who will, of course, be giving it the shuffle treatment which will precede a firework and light show, images we are sure to cherish for a lifetime.

Liverpool vs. Chelsea will be shown live in the UK on Sky Sports Main Event and Sky Sports Premier League and free-to-air on Sky Pick, with coverage starting at 8pm (BST) ahead of the 8.15pm kickoff.

Chris Williams will be keeping you entertained and up to date with all the action on This Is Anfield’s matchday liveblog, starting from 7.30pm (BST).