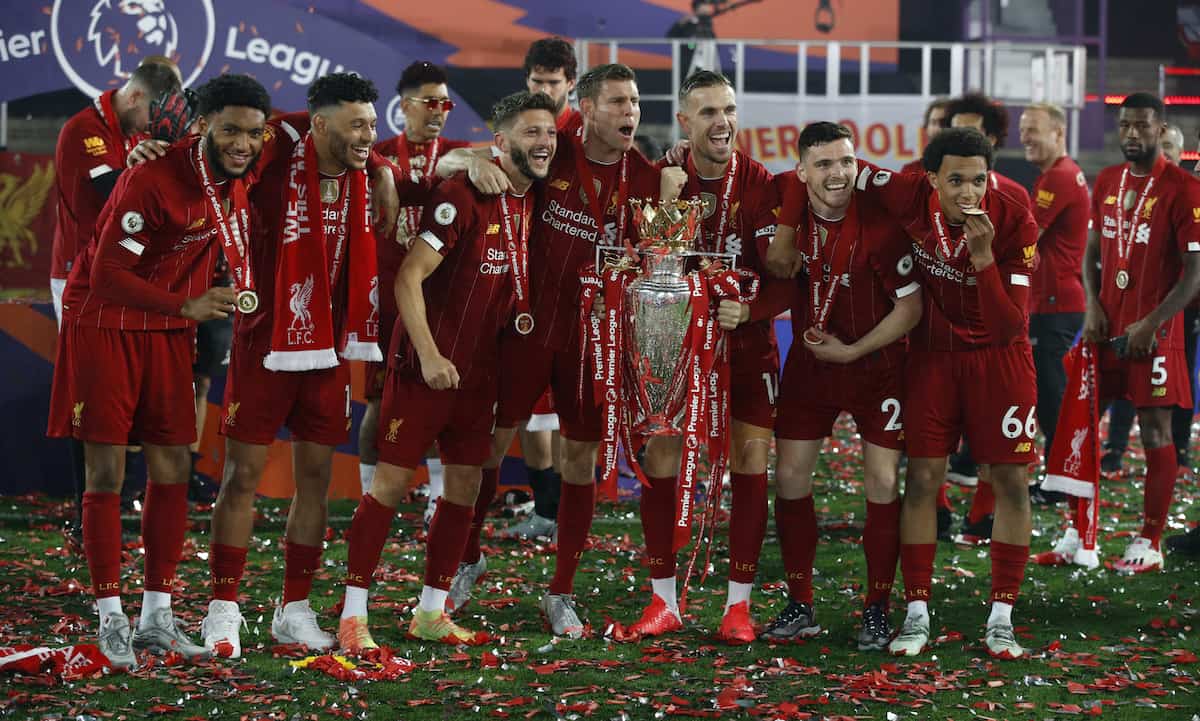 Liverpool beat Chelsea 5-3 in a crazy game at Anfield in the penultimate game of the season, prior to lifting the Premier League trophy.

Jurgen Klopp‘s men faced a crowning moment in their triumphant league season as they hosted a Chelsea side chasing Champions League football.

The hosts produced an attacking exhibition in the opening 45 minutes, with Naby Keita, Trent Alexander-Arnold and Gini Wijnaldum all producing stunning finishes.

Olivier Giroud did pull a goal back on the stroke of half-time, but it was a night that ultimately belonged to Liverpool.

Roberto Firmino finally ended his Anfield goal drought with a well-taken header, prior to Tammy Abraham finding the net.

Christian Pulisic threatened to complete an unlikely comeback, only for substitute Alex Oxlade-Chamberlain to finish off a dazzling counter-attack move.

Supporters reflected on a bonkers contest at Anfield…

Deserved 3 points. Finally getting this trophy, it’s been far too long coming.

So important to win that, for everything that team have done this season. To end the wait in such style, with so many games remaining. So special. Two points dropped at home all season. Anfield a fortress again, and Liverpool are champions. #LFCdigest

FT: #LFC 5 Chelsea 3: A crazy way for the PL champions to sign off at Anfield on their special night. Keita, Alexander-Arnold, Wijnaldum, Firmino and Oxlade-Chamberlain with the goals. Klopp's men will lift the trophy on 96 points. A special team with an incredible manager.

“Never in doubt. It was good to see us snap out of our post-lockdown lethargy and motivate ourselves for the last home game of the season.” – cynicaloldgit on the forums.

That’s three consecutive seasons unbeaten in the league at Anfield.

Certain individuals were hailed for their performance…

• Premier League Champions.
• Unbeaten at Anfield this season.
• We’re the best team in England.
• What a way to win it.
• So happy for Firmino.
• Naby Keita is sensational.
• Trent is the best RB in the world.
• I love you guys.

“Trent, Naby and Gini..” – Incognito on the forums.

Stunning freekick from @trentaa98. The most talented right back in the world. Almost too good for the position.

Trent Alexander-Arnold is the best right back in the world.

27 & 26 – With their assists tonight, Andy Robertson (27) and Trent Alexander-Arnold (26) are now the outright top two defenders for most @premierleague assists for @LFC, both ahead of Stig Inge Bjornebye (25). Bros. pic.twitter.com/zTsjPm1JAp

Van Dijk and Gomez since they won the league pic.twitter.com/rZUFKM2n34

“If Virg starts next game he’ll be the only player of ours to have started every league game over the last two seasons. Think he needs a rest based on his last 2/3 games.” – shankly96 on the forums.

I'm glad that after achieving what we wanted Liverpool played out some of the old hits to remind fans of the days of trash defending and ridiculous scorelines in end to end games.

Liverpool's defending since clinching the title has…. not been whole-assed

The imminent title lift was the main discussion point, though…

BOUNCING UP THOSE STAIRS TO LIFT THE TITLE LIKE…..pic.twitter.com/2AVSPlHjI0

Great win by the champions…now for the trophy ???#Champions pic.twitter.com/Y6kJWRT6KO

Well that was a delicious starter, what do we all fancy for a main course?